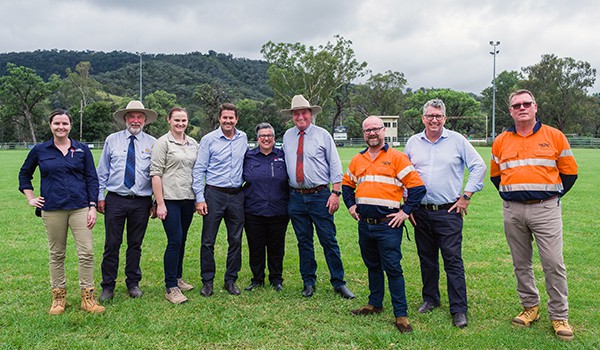 The Federal Government has pledged additional funding of up to $433 million for the new Dungowan Dan in Tamworth, which aims to maintain town water supply and water for irrigators and landholders.

The new Dungowan Dam would be 58m high with the catchment area measuring 175m2.

The New South Wales Government has welcomed the further commitment from the Federal Government for this jointly-funded project.

Deputy Prime Minister and Minister for Infrastructure, Transport and Regional Development, Barnaby Joyce, said it was a monumental day for Tamworth and the Peel Valley.

“Water is wealth and dams are the banks that drive regional Australia, supporting the growth of our cities and towns,” Mr Joyce said.

“Without water, our town stops. The coffee shops and hairdressers won’t open, the abattoirs will shut down and all of the industries that underpin our standard of living will disappear.”

This commitment takes the Federal Government’s total funding contribution towards Dungowan Dam and Pipeline to up to $675 million including prior funding for field and ancillary works.

Acting Premier and Minister for Regional New South Wales, Paul Toole, said the New South Wales Government is getting on with the job of building dams.

“This is a significant step forward for the new Dungowan Dam project,” Mr Toole said.

“The construction of the new Dungowan Dam and pipeline will create hundreds of jobs and generate millions of dollars for local businesses over the next few years which is great news for communities around Tamworth.”

Member for Tamworth and New South Wales Minister for Lands and Water, Kevin Anderson, said the New South Wales Government would continue to work towards securing the approvals needed to reach the final investment decision.

“This $1.28 billion project would be funded by the New South Wales and Federal Governments 50:50 and is one of the largest investments in water supply infrastructure in NSW history,” Mr Anderson said.

“Secure water supply is critical to the future of Tamworth and the Peel Valley and that is why we are getting on with the job of bringing this dam to a final investment decision.”

The New South Wales commitment is conditional on a continued, guaranteed 50 per cent co-contribution from the Federal Government.

New South Wales funding is also subject to Infrastructure Australia’s assessment of the business case and finalisation of planning approvals.

Work has already started on the first stage of the new 55km underground pipeline which runs from the Calala Water Treatment Plant at Tamworth to the Dungowan Showgrounds.

The final section of the pipeline will be laid once the initial stage is completed and will link the dam to the showgrounds and Tamworth.

The next milestone for the new Dungowan Dam and Pipeline is the Environmental Impact Statement which will go on display before the end of 2022 with the final investment decision to follow.