A functional and aesthetically pleasing solution for pipes Capri on Via Roma, a modern marketplace on the Isle of Capri on the Gold Coast in Queensland, certainly doesn’t fail to impress with its contemporary architecture and waterfront location. It boasts the best specialist providers, leading restaurants, and retailers on the coast, including an artisan bakery, fresh food stores, a jeweller, florist, homewares store, and a 24/7 fitness centre.

Completed in late 2013, Capri on Via Roma houses over 50 retail and commercial tenancies, plus 250 car parking spaces, of which 175 are underground.

However, it is the construction work behind the structure that is most impressive. It’s almost a work of art.

Just above the heads of visitors at the Capri on Via Roma is a very complicated set of pipework that brings the entire building its gas and water supplies.

The project presented quite a few challenges, in particular what system would actually work in the basement area where the pipework was to be installed. In addition, there was the added challenge of the lengths of pipe that run and clash with other services – plus the client wanted all the pipes to run parallel together.

To complete the job, a wide range of Viega products were used, from DN15 up to DN65, and Viega gas fittings, from DN25 to DN50, including bends, tees, unions, adapters and joiners.

Robert Hardgrove, National Technical Manager/Strategic Projects – Viega Australia, said, “Where the pipework runs were installed greatly depended on where the other services were installed.” 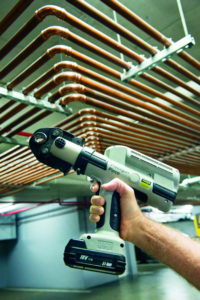 “Clashes were a big problem, so the height and direction of the runs can change constantly. The plumbing and building contractors elected to use the Viega water and gas system, which cut down the installation time,” Mr Hardgrove said.

“Our client also chose Viega for a number of other reasons, including the look of the finished work. The pipes are visible on the basement level, so the pipework needed to be aesthetically pleasing as well as functional. He was also drawn to the ease of installation and the warranty that comes with using these products.”

This partner content was brought to you by Viega. For more information, visit viega.com.au.