A lot happening underground in Logan Horizontal directional drilling (HDD) technology is leading to significant environmental benefits in the City of Logan, while also resulting in major cost savings for ratepayers. The technology is being used in sections of a 9.6km trunk infrastructure pipeline (up to 700mm in diameter) being built between Greenbank and Flagstone as part of the network that will service the city’s new state-of-the-art wastewater treatment plant at Cedar Grove.

Logan City Council used the HDD method to install a segment of pipe over 1.3km from Greenbank to Flagstone – the longest underground drilling project in the city’s history.

The pipeline works will connect the Greater Flagstone PDA to the treatment plant at the Cedar Grove Environmental Centre, which was designed to cater for the 162,000 people eventually expected to call the region home.

Council was committed to minimising environmental harm wherever possible. It is an approach Council has also taken in the construction of its state-of-the-art wastewater treatment facility in Cedar Grove and the associated infrastructure.

Logan City Council Roads and Water Acting Director, Daryl Ross, said Council had the impact on the environment and the community front of mind when considering options.

“Because HDD doesn’t disturb the ground surface there is less environmental impact,” he said.

“The area includes Flagstone Creek and Abrade Creek as well as the sensitive habitats of koalas and grey-headed flying foxes.

“Avoidance of traditional open trench methods meant one hectare of native vegetation was saved in the process.”

“This is due to the sewer rising main being able to be built through undulating ground,” he said.

“This improves the hydraulics by having less rises and falls, and therefore reduces pumping costs over the life of the asset.” 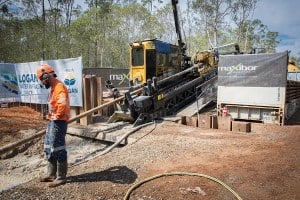 Mr Ross said it was the first time in Australia that Polyethylene (PE) – High Stress Crack Resistant (HSCR) pipe material was used for a wastewater project.

As there is a resin in the pipe material, it seals up any cracks caused by the dragging of the pipe against the walls of the drill hole.

Mr Ross said the expected design life for these pipes is 100 years.

“That offers the longest possible lifetime for a wastewater pipe and reduces the risk of issues during the installation process,” he said.

The project will also be the first in Australia to use an underground magnetics walkover locating system. The drilled pipe is up to 54m deep, but conventional tracking devices can only monitor the pipe to a depth of 20m.

Mr Ross said the magnetics walkover locating system was a contractor-led initiative as it can track the buried pipe up to 110m deep.

Benefits for the community

“This section of infrastructure is part of the future Greater Flagstone wastewater network, which includes 34km of pipelines and 12 new pump stations,” he said.

“It will transport wastewater from homes and businesses in Greater Flagstone to the treatment plant at the Cedar Grove Environmental Centre.

“The Cedar Grove Environmental Centre and its related infrastructure will provide the capacity to manage wastewater flows from growing communities in the region.

“During the construction it has also provided employment for local people and local businesses.”

The project is due for completion in coming weeks.

Construction work on the Cedar Grove Environmental Centre is about 80 per cent complete and the facility is expected to be operational by the middle of this year.