The Southern Highlands Irrigation Scheme will deliver water to one of the driest areas of Tasmania and is vital in the diversification of agriculture and expansion into dairying, horticulture, viticulture and potential downstream processing.

The $31 million Southern Highlands Irrigation Scheme (SHIS) is one of five schemes which comprises Tasmanian Irrigation’s (TI) second suite of schemes known as ‘Tranche Two’, which commenced its first season of water deliveries on the 1 November 2017.

The SHIS is centered around the township of Bothwell in the state’s southern highlands region, with a total irrigable area of 8000ha. The region is an important cropping and livestock finishing region and also one of the most drought prone areas of Tasmania.

This historic lack of a reliable water supply has prevented the region from reaching its full potential with water for irrigation purposes being historically limited, impacting on growth in the region.

SHIS Irrigator Committee Chair, Richard Hallett, said that the idea of bringing water from the Shannon River catchment into the broader Clyde River catchment has been discussed since the 1800’s but progress has been slow.

Twenty-three local farmers have contributed $8.66 million to the scheme with the rest of the funding coming from the Federal and State Governments.

“Partly as a result of the drought years of 1999/2000 and 2006, 2007 and 2008, it became a reality as farmers, along with the State and Federal Governments, finally got together to do something about the poor water security for the Southern Highlands region, a region which had so much to offer in productive farm land for cropping and livestock,” Mr Hallett said.

“This is one of the driest and formerly drought prone agricultural areas of Australia, but has some very fertile soils. By developing irrigation we have turned one of our risks/weaknesses (our dry conditions) into a strength, as high value crop production is very well suited to our dry climate and long warm summers. It has been a case of ‘just add water’.”

In 2008, the Emergency Shannon-Clyde Water Scheme was implemented by the Tasmanian Irrigation Development Board (TIDB) to provide a temporary water supply to the Clyde River catchment until the end of the 2008/09 irrigation season.

This prompted the TIDB to investigate a separate longer term scheme to supply additional irrigation water to the Clyde River catchment beyond the end of June 2009 as one of its portfolio of large-scale irrigation projects around the state.

Making the land fit for production 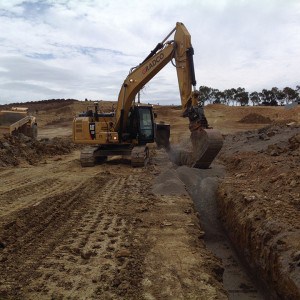 The objective of the SHIS is to harvest water from a catchment where there is plenty of winter flow, and deliver it to a neighboring region where it can be used for production.

“The water we harvest from the Shannon River would otherwise largely end up flowing out into the Derwent River (to sea). The basic principle here has been to build the infrastructure link between where there is plenty of water and connect it with the land,” Mr Hallett said.

The scheme will support farmers by providing a secure water supply to underpin high value crops and livestock production, and unlock tens of millions of dollars of on-farm investment in irrigation equipment and technologies.

The scheme also doubles the area of irrigated land in the Southern Highlands region.

The SHIS has a total entitlement volume of 7215ML of high reliability irrigation water, which is harvested into the Southernfield Dam (approximately 17km northwest of Bothwell) from the Shannon River, and then delivered via approximately 58km of pipe running from Waddamana Road, south to Bothwell and on to Hollow Tree.

Winter flows from the Shannon River will be pumped up to the 7600ML Southernfield Dam, which is a zoned earth fill embankment, with a 500m long and 26m high wall.

The pump station is located south of Waddamana Road on the banks of the Shannon River, and is responsible for filling the dam and pumping water to the scheme.

The 1MW pump station has been designed to maximise operational flexibility, with the ability to pump to the dam, the scheme or a combination of both at the same time.

In addition to the Shannon River Pump Station, the scheme also has two small booster pumps at Bothwell and Hollow Tree.

“All on-farm pipe is either poly or PVC pipe, and most of the water is applied to paddocks using highly efficient centre pivot equipment. Many irrigators also use variable rate irrigation systems on their irrigators, which allows farmers to pinpoint application perfectly to different zones in their paddocks, based on soil type, slope, drainage, aspect, crop requirements and
other factors.”

Pharmaceutical poppy production is the main type of crop grown in the area but other crops include dual purpose cereal (wheat) production, grass and other seed crops, as well as intensive grazing enterprises such as red meat production.

Dairy production is also planned, with canola, linseed, hemp and other production a possibility. The region also has some potential in horticulture production in the future, for example cherries or grapes.

Farmers have been using all available technologies to design and implement their on-farm infrastructure.

Technologies such as drones, grid mapping, crop imaging technologies and soil surveying have been essential in the preparation of their land and the management of their crops and irrigation.

Drones enable farmers to create detailed terrain, drainage, soil variability and irrigation maps. They can then use that data to pinpoint where on their farm the extra water will be most useful.

Some farmers have set up on-farm wi-fi networks so they can control irrigators on the site via their mobile phone.

The use of technology and precision agricultural techniques is helping farmers to operate their land more efficiently and maximise their return on investment.

Mr Hallett said that irrigation design and use has come a long way over the last 20 or 30 years.

“The emphasis is now on creating smart irrigation systems where you have maximum efficiency and zero loss. The cost of this water is too high to be using in any other than a highly productive and efficient manner. So, it is a self governing factor.”

To date, the scheme has performed as expected during its first season.