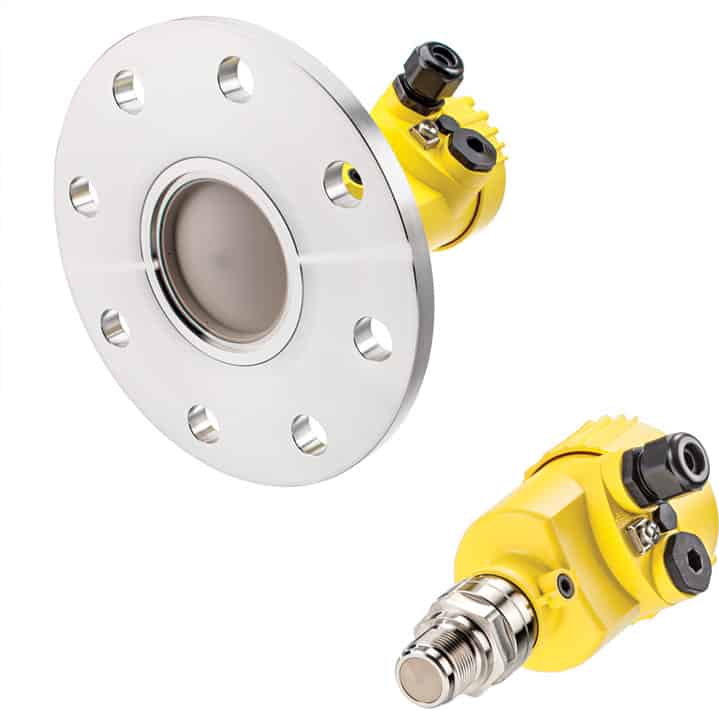 VEGA is the experienced supplier of level and pressure sensors for water and wastewater treatment. Radar sensors provide reliable and accurate continuous level readings, providing the basis for monitoring the flow in the sewer system and helping to protect against flooding. In a stormwater overflow basin, the radar sensor is used for level and overflow volume measurement.

The use of the radar level transmitter for the process industry started back in 1991. These were extremely large units and operated with a 6GHz frequency. The units were sold generally into liquid applications and were only ever considered when no other technology would work.

They were a large unit weighing in at several kilograms and operated only from an AC supply.

The year 1999 saw the release of the 26GHz radar level transmitter, offering a smaller unit with a reduced antenna size and narrower beam angle (a downside to lower frequencies is the larger beam angle).

VEGA continued to develop and improve radar level transmitter performance through the first decade of 2000.

The main changes were in the software area where, thanks to customer feedback, the parameters for setup were improved, and became much more descriptive and user-friendly.

As with all developments, there is a point where the components and physics of the technology have been maximised. At this stage VEGA started research on the 80GHz frequency range.

This frequency was not completely new to the market as it was, and still is, quite common in the automotive industry with reversing sensors.

During the research and development of this frequency, VEGA carried out a number of real-life customer trials and the results of these opened up many more opportunities for the use of the radar that had never been practical before.

It also allowed for antenna sizing for the first time and adaption to many typical processes that exist in industry. One thing to note in regards to radar frequencies is that as you increase the frequency, the antenna size and the beam angle reduce.

Radar level transmitters work on the reflection of the signal from the product being measured and the strength of that returned signal is based in the Dielectric Constant (Conductivity).

In the past, radar was not considered to be suitable for applications that had a relatively low DC value.

Eighty GHz now allows these measurements to take place, but, of course, there are other considerations. As well as high frequency, quality components that provide very good sensitivity or dynamic range are also essential.

Up to this point, radar level transmitters have typically had a dynamic range of around 90db – that was until the VEGAPULS 64 (for liquids) and the VEGAPULS 69 (for solids) were developed.

VEGA now manufactures a radar level transmitter with a dynamic range of 120db, an increase of 30db. Similarly to audio, for every increase of 3db, the power is doubled.

With an increase of 30db, the VEGA 80GHz radar level transmitter is able to provide over 1000 times the sensitivity of previous and existing radar frequencies.

With this increase, VEGA transmitters are now able to measure extremely low DC products such as plastics.

Radar level transmitters, like all instrumentation, do have their limitations, many of which are set by the physics of the technology.

It is very important to take into account not just the frequency but all the data when evaluating whether a transmitter is suitable for the application.

At VEGA, 80GHz has proven to be a large step forward in solving difficult applications.

Radar level transmitters are now a very accepted form of non-contact level measurement and the use of these units has increased by many times over the past decade.

As with all developments, it is not over yet and VEGA will continue to improve the transmitters so that in the near future we again break the barriers faced previously and open up the opportunities for radar to solve more and more applications.

This partner content is brought to you by Vega.  For more information, visit www.vega.com