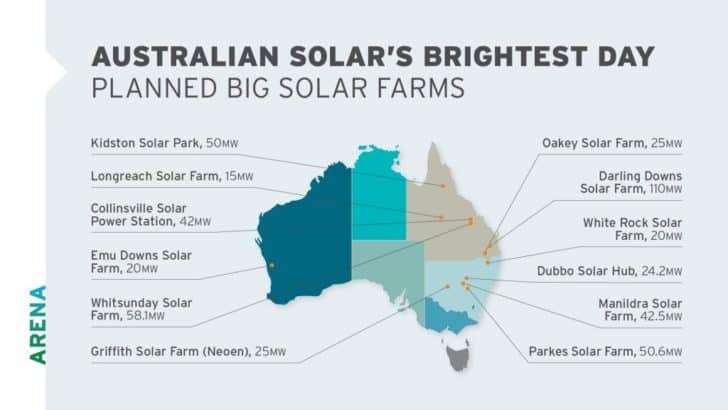 Energy production from solar is expected to triple with the construction of twelve new large-scale solar photovoltaic (PV) plants in Australia.

The new plants are expected to unlock almost $1 billion of commercial investment and boost regional economies which aims to accelerate Australia’s move to sustainable energy.

“ARENA is working to accelerate Australia’s shift to a sustainable, affordable and reliable energy future and our work supporting the development of Australia’s large-scale solar industry is central to this vision,” Mr Frischknecht said.

“Six plants in Queensland, five plants in New South Wales and one plant in Western Australia are slated for funding, in a major milestone that’s expected to triple Australia’s large-scale solar capacity from 240 MW to 720 MW.

“They will provide enough energy to power 150,000 average Australian homes and deliver one tenth of the new capacity required to meet Australia’s 2020 renewable energy target.”

Mr Frischknecht said regional economies will greatly benefit from the growing big solar industry, with 2,300 direct jobs and thousands more indirect jobs expected to be created by this round of funding.

“It is now up to successful companies to deliver these projects in line with ARENA’s requirements, which could see all plants built by the end of next year. This is an aggressive timetable to lock in financing, off take arrangements, connection agreements and required approvals,” Mr Frischknecht said.

APA has been approved for $5.5 million of funding, pending finalised commercial agreements for the project which will be located adjacent to, and share infrastructure with, the company’s existing Emu Downs WInd Farm.

Genex were approved for up to $8.85 million of funding to be used for construction costs of the Kidston project.

Genex’s Managing Director, Michael Addison said, “Genex is pleased to partner with ARENA to advance the construction of its Solar Project at Kidston in North Queensland.

“The estimated construction costs for the Company’s Solar Project will benefit significantly from this competitive environment.

“Additionally, the significant natural advantages of the site such as the high solar yield prevalent in this part of North Queensland, favourable ground conditions and existing infrastructure provide a compelling investment case.”

Mr Frischknecht said since it was established in 2012, ARENA had been a driving force in bringing down costs and accelerating the commerciality of large-scale solar in Australia.

“As a result of our efforts, the ARENA funding ask for big solar projects has dropped significantly from half of total project costs to just 10 per cent on average. This means that every dollar of ARENA funding is leveraging $10 from other sources in this round.

“ARENA support and knowledge sharing activities have also slashed the locally determined costs of developing and building plants by more than half.

“We made a point of working with developers and network companies to design our large-scale solar round and identify where ARENA’s support would have the most impact.”

Mr Frischknecht said an ARENA expected $100 million of grant funding to support around 200MW of new projects when the program was announced in September 2015 but this had doubled to $92 million, supporting around 480MW in total.

“This competitive tender approach could be adopted to speed up the commercialisation of other renewable energy technologies such as battery storage, concentrating solar thermal and bioenergy,”  Mr Frischknecht said.

“ARENA is not just focussed on building more solar. We want to bring down costs faster, fuel growth in Australia’s industry and give the next tranche of projects a head start.

“The projects delivered through the ARENA funding round will build on current expertise and generate new knowledge for the burgeoning large-scale solar sector including co-location of solar and wind.

“Australia’s big solar revolution is tantalisingly close and, as more home-grown businesses step up to provide construction, engineering and financial services, this newest tranche of ARENA-supported projects is well positioned to take the sector even closer to commerciality.”