One reason for this is the nature of its geography, as there are a lot of elevation changes. There are also seasonal fluctuations in the water usage, as demand rises rapidly during the summer months.

As a result, there are around 700 active PRVs in the city of Athens that ensure a reliable water supply to 5.5 million people. However, the complex pressure demands require the PRVs in Athens to be durable, smart and flexible – qualities that not all of the existing valves have been able to offer.

In 2021, the Athens Municipal Water Authority therefore decided to proceed with a pilot project in its water network with cutting edge NeoFlow PRVs developed by GF Piping Systems.

In order to measure the potential benefits of NeoFlow, the decision was made to launch the pilot project on Salamis, an island off the coast of Piraeus.

Vangelis Balokas, Technical Director at Olympios SA, one of the suppliers of the project, said, “We chose this location because it’s a perfect example of the water challenges in this region.

“A very large section of Salamis is mainly a summer destination, so the demand for water is very high during the tourist season but very low during winter.”

After a number of successful tests were conducted at Olympios headquarters, it was time for a NeoFlow PRV to be installed on the island in September 2021. The newly installed neoflow pressure regulating valve on the island of salamis.

Before the new valve could be fitted, the existing model, which was struggling to meet expectations, had to be removed – a task that required three people to complete. The NeoFlow PRV, on the other hand, could be handled and installed by a single person due to its lightweight and compact construction.

In total, the replacement took about one hour. “After the installation the results were fantastic. The downstream pressure was much more stable compared to the previous PRV,” Mr Balokas said. 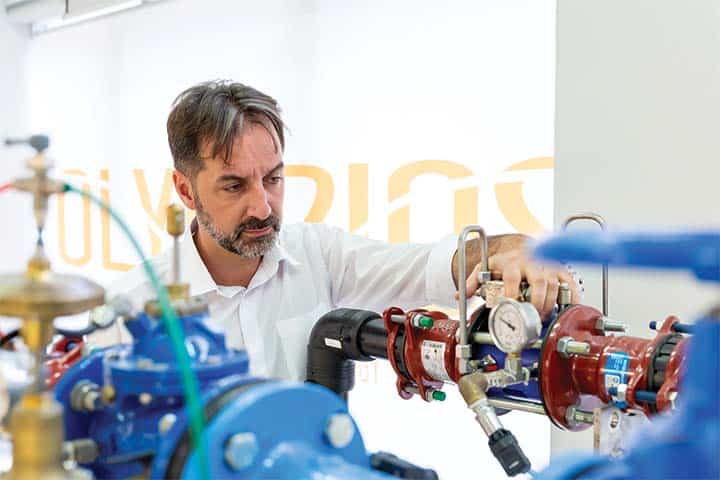 “Crucially for us, this was also the case at very low flow rates of around three to four litres per second.” The NeoFlow PRV is designed to help utilities achieve accurate and stable flow as well as an increased flow capacity. Its axial flow construction, which only features three components made from corrosion-free polymers, is designed to be as simple and compact as possible.

For utilities, this means reliability, an extended operational lifetime, and reduced maintenance requirements. Moreover, NeoFlow allows utilities to easily digitise their water networks by installing attachments such as flowmeters directly onto the body. Mr Balokas said these are features that set NeoFlow apart.

“It is a revolutionary product in comparison with other PRVs. Especially in very low flow situations, it sustains pressure much better. We hope to install many more NeoFlow valves in the future.”

This sponsored editorial is brought to you by GF Piping Systems. For more information, visit https://www.gfps.com/landing-page.html.