Across Australia there is growing momentum towards finding solutions to traditional and emerging threats to water resources and infrastructure through innovative technology and programs. Water Corporation and South East Water have recently been recognised for their innovations in the water industry, and have been appointed members of the Leading Utilities of the World (LUOW) network. Reducing water use, through initiatives such as waterwise gardens, forms an important part of Water Corporation’s long-term planning.

At the 2017 Global Water Summit in Madrid, Spain, the Global Water Leaders Group launched LUOW to highlight the achievements of the top performing water utilities in the world, with ambitions to change the way the industry works through the promotion of performance and innovation.

Samantha Yates, Secretary General of the Global Water Leaders Group, said, “It is a space where utilities doing remarkable and innovative things can shine a light on their achievements, share their experiences, and get involved in an ongoing conversation about how to do things even better – because we always perform better when we work together.”

Twelve water and wastewater utilities were inducted into LUOW at the Summit. Six utilities joined as founder members of the group’s Advisory Board, with another six selected to join by acclamation after presenting their innovations and future plans for innovation to the board.

Water Corporation was appointed a founder member of the LUOW Advisory Board along with DC Water (US), Milwaukee Metropolitan Sewerage District (US), Waterworks Bureau of City of Kitakyusha (Japan), Waternet Amsterdam (Netherlands), and Public Utilities Board (Singapore).

A Water Corporation spokesperson said its appointment to the board was recognition of its reputation for performance and innovation in the utilities sector.

“Water Corporation’s achievements to secure water supplies in response to climate change are well regarded by water utilities across the world. The south-west corner of Western Australia is known as one of the areas of the world most impacted by climate change. Since the 1970s rainfall in the south-west of WA has reduced by around 19 per cent, but inflows to dams have declined much more dramatically,” the spokesperson said.

Water Corporation’s long-term plan to secure water supplies in response to climate change, titled Water Forever, is based on a three-pronged approach, which includes working with the community to reduce water use, increasing the amount of water recycled and developing new water sources.

“We are progressing well towards the targets set in Water Forever, including the development of climate-independent sources such as desalination and groundwater replenishment. Desalination is now the largest source of water for Perth, contributing 47 per cent of total supply in 2015-16,” the spokesperson said.

“An important part of Water Corporation’s Water Forever plan is our continued work with our customers – households, businesses and industry – to reduce water use.

“Water saving efforts in Perth helped save around 130 billion litres of water in 2015-16. To put that into perspective, that’s more water than WA’s largest desalination plant produces in a year.

“Investment in ongoing programs and education, to help the community reduce water use and ensure water is used sustainably, has deferred the need to invest in new water sources.”

Water Corporation also works closely with business and industry to save water.

“Through various programs, water saving advice has been provided to 326 large businesses, industry customers, office buildings and housing developments. This has helped save more than 72 billion litres of drinking water since 2007,” the spokesperson said.

Showing innovation is key to LUOW, and Water Corporation believes it is vital for water utilities to keep up 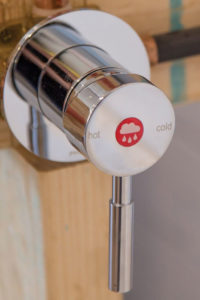 Rainwater to hot water systems are one of the innovations south east water is developing to build more resilient communities in the face of climate change.

with the changing ways in which customers want to be engaged, as well as providing operational improvements.

Water Corporation’s innovation in helping its customers to save water won the utility an Australian Water Association award, taking out the 2016 Water Innovation Challenge for its online Water Use Calculator.

“The Water Use Calculator allows households to create a water saving plan, quickly and tailored for their home. The water use calculator uses a traffic light system to give a rating for each room of your home, including the bathroom, kitchen and living area, laundry and garden,” the spokesperson said.

“This provides an overall waterwise rating for a home, compared to others of a similar size. The calculator then creates a water saving plan, personalised to the household.

“By calculating the amount of water used in each area of the home, the action plan is able to hone in on areas which can achieve the most significant savings. Users are then able to print, email or even share their action plan on social media.”

On the operations side, the utility also won the national Water Industry Safety Award at the 2017 Australian Water Awards, held during the Ozwater conference in May.

“The innovation is known as a ‘crawler’ – a remote-controlled device that attaches to the external steel wall of a water tank and measures the thickness and condition of the steel using ultrasound technology. The device can roam up to 30m high, which allows Water Corporation to get a clear picture of the condition of the tank,” the spokesperson said.

South East Water was inducted as an inaugural member of LUOW at the Summit, along with Budapest Waterworks (Hungary), Atlanta Department of Watershed Management (US), VCS Denmark (Denmark), Los Angeles Department of Water and Power (US), and K-Water (South Korea). 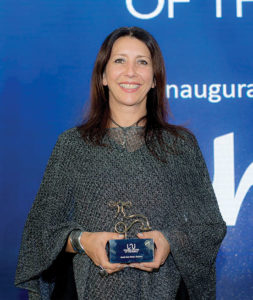 South East Water Chair, Lucia Cade, said the utility was given the opportunity to talk about the solutions it is developing to deal with challenges such as climate change, population growth and shifting customer expectations.

“We demonstrated how we’re leveraging emerging technologies to tackle these challenges. A good case study is Aquarevo, a collaboration with Villawood Properties, to build what’s on track to become Australia’s most water-efficient residential development,” Ms Cade said.

“Aquarevo is intended to show there’s a better way to use water in the home without losing liveability. Solutions include an app that will enable Aquarevo homeowners to track and monitor all energy and water use in near real time on a single interface, and a rain to hot water system for  bathing and laundry.

“We have also designed an intelligent pressure sewer system that takes wastewater to a treatment plant on the estate, treats it to Class A standard, and returns it to homes for irrigation and toilets.

“These solutions are all underpinned by South East Water’s intelligent OneBox® monitor and control technology, which we developed to make our water and wastewater systems smarter and more flexible. The solutions have the potential to support liveability not just in our service region, but across Australia and beyond, and it’s fantastic to see them recognised.

“It’s rewarding to see our work recognised globally, and to share the stage with so many other innovative organisations. However, it’s also a reflection on the local water industry as a whole. In Victoria, we have a history of collaboration as a sector to find new ways to deliver value for customers. Whether it’s integrated water management, IoT enabled meters, or innovative community support programs, our goal is to work together where we can for the benefit of our customers.”

Ms Cade said that water utilities around the world are facing many of the same challenges; cities are growing, climate change is creating increased uncertainty about future water supplies, and millions of people in the world still don’t have access to reliable safe drinking water and sanitation.

“Leading Utilities of the World has a role to play in sharing expertise to help rectify this, and achieve the UN Sustainable Development Goals,” Ms Cade said.

“An example is the application of South East Water’s OneBox® technology in the Wellcome Trust/Asian Development Bank funded research project in Indonesia and Fiji.

“Led by Monash University, the project will help to bring cost-effective and reliable sanitation to clean up the water in unplanned slum developments in large cities that haven’t been able to keep up with population growth.”