The University of New South Wales (UNSW) is making new partnerships that will investigate the potential of smart cities and hybrid energy storage systems.

UNSW Sydney will lead Australia’s first fully integrated smart city trial in partnership with Providence Asset Group (PAG) and Tamworth City Council, in a deal announced at an event at the University.

The trial will be the first based on Internet of Things (IoT) technologies and include applications across transport, energy, health, telecommunications and other community services. Previous trials have incorporated only energy systems and are based on older technology on individual user cases instead of an integrated approach.

Professor Joe Dong, Director of the UNSW Digital Futures Grid Institute, is leading the research at UNSW and said the aim for the Tamworth Smart City project was to build the IT systems that would monitor and control data flowing through “smart” services, using the wireless network.

“Imagine having an app on your computer or phone that gives you your electricity usage and cost information in real time, and also tells you how some slight change of usage pattern of appliances such as the washing machine could most effectively save electricity bills,” Professor Dong said.

“You could have other apps on the smart network for a variety of purposes – such as wearable health monitors that alert your medical practitioners should you need to go and see them or live transport and traffic monitoring to give you alternative routes as soon as a hazard occurs.

“If we can prove that our solution works, the potential benefits are endless.

“UNSW is very excited to trial these systems with Tamworth City and Providence, and hopes it will provide a template for other smart cities in Australia in the future.”

“We are delighted to be recognised by UNSW and for their strong support. Providence realises Australia has global leading universities and talents,” Mr Sun said.

“We want to bridge them with industry. On the other side, we are collaborating with world class partners in the renewable field such as Risen Energy and Sungrow Power.”

In another announcement, UNSW detailed its involvement in developing Australia’s first large-scale hybrid energy storage system – using lithium batteries and hydrogen fuel cells – to be installed at a $200 million solar farm to be built by Providence Asset Group and Risen Energy Group in south-east Queensland. The system will be designed to store surplus electricity generated at the farm and then discharge it when required.

Professor Dong and his team, together with researchers from UTS and with Providence Asset Group as lead applicant, was working on a solution that would use artificial intelligence to manage and smooth out the intermittency of renewable energy, balance out supply and demand, and allow the storage and use of excess renewable energy where and when needed.

“The Australian Renewable Energy Agency have said hydrogen could contribute $1.7 billion annually to the Australian economy by 2030, driven domestically and by demand for sustainable green hydrogen in Japan, South Korea, China and Europe,” Professor Amal said.

Professor Amal said Australia was well-placed to take the lead on hydrogen technologies.

“Australia has plenty of sunshine and we lead the world in solar technology. The use of hydrogen technology to store renewable energy at this solar farm is just one opportunity for Australia in the global hydrogen market,” she said.

Professor Amal also said that Australia was well positioned to lead the world in hydrogen generation and transport, and that UNSW researchers, along with industry partners and other universities, were working to highlight the magnitude of this opportunity to capitalise on Australia’s strengths and not miss out on a lucrative opportunity for the country.

Professor Nicholas Fisk, Deputy Vice-Chancellor, Research at UNSW, thanked the partners at the event, “UNSW Sydney is already a world leader in renewable energy research. But the challenge to efficiently, stably and affordably generate, store and distribute sustainable electric power for all Australians in future cannot be achieved without significant investment and the contributions of our partner organisations.

“I am very proud of UNSW’s involvement in these endeavours and extremely grateful to all involved.” 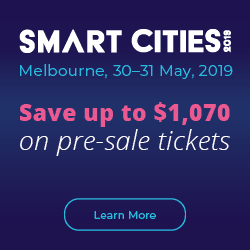 The inaugural Smart Cities 2019 conference will run from 30-31 May 2019 at the Pullman Hotel in Albert Park, Melbourne. The event highlights the tools, technologies and people working to make our cities smarter, more efficient, better places to live. Hear from industry leaders, connect with colleagues and gain new ways of thinking about the cities of the future.

Early bird tickets are available on the Smart Cities website until Friday 3 May. To register, click here.