The recently completed 530 km APLNG gas transmission pipeline has occupied much of the Australian gas pipeline industry for several years. We take a look at each stage in the construction of this world-leading gas pipeline project.

The Australia Pacific Liquefied Natural Gas (APLNG) project is one of three mega coal seam gas (CSG) to LNG projects under construction in Australia. The project is on track to have the first LNG train started up in mid-2015 and the second LNG train remains on schedule for start-up in late 2015.

The main export pipeline is now being commissioned, the first gas began flowing from the Condabri Central Gas Processing Facility in June, and on Curtis Island hydrotesting of both LNG storage tanks was successfully completed in August.

Australia Pacific LNG is an incorporated joint venture between Origin, ConocoPhillips and Sinopec. Origin is responsible for the further development of Australia Pacific LNG gas fields in south central Queensland, and the construction and operation of upstream gas field facilities and the gas transmission pipeline.

ConocoPhillips is responsible for the construction and operation of the downstream multi-train LNG facility and associated infrastructure on Curtis Island, near Gladstone. The LNG plant will be constructed using ConocoPhillips’ Cascade technology, and will have the capacity to produce up to nine million tonnes of LNG per year.

A key component of the Australia Pacific LNG project is the high pressure gas transmission pipeline that will transport CSG from the gas fields in the Surat and Bowen Basins of Queensland to the LNG plant on Curtis Island.

The pipeline infrastructure comprises the 530km main export pipeline and 180km of high pressure laterals connecting to Gas Processing Facilities such as Condabri and Reedy Creek.

“This is the one of the largest pipeline projects that’s been undertaken in Australia,” Graeme said. “The pipeline consists of over 700km of high pressure gas pipeline of which 360km is 42inch – very large, high pressure pipeline.”

“Just the sheer size of the project in its own right is a challenge, and we have successfully delivered construction of this world class project as planned, and on time.”

MCJV was contracted to engineer, procure, construct (EPC) and pre-commission 510km of the large diameter pipelines on the project. The MCJV engineering scope extended to the whole of the gas pipeline system.

Origin procured all the line pipe as well as the large valves and fittings.

Nacap is constructing the infield small diameter gas pipelines that connect the various gas plants to the main export pipeline and has constructed 40km of high density polyethylene pipeline for water transfer.

Getting off to a great start

Getting the basics right at the start of the project played a key role in managing technical complexities, resolving construction and timeframe challenges, and creating a unified “one team” culture of cooperation and support across multiple sites, teams and companies.

The use of an Engineering, Procurement and Construction (EPC) contract model enabled Origin and MCJV to share ideas and expertise in design, selection of materials and equipment, and resolve potential issues with construction techniques.

While use of EPC is not unique, Mr Hogarth said the decision to also establish an integrated leadership team (ILT) with representatives from Origin, MCJV and Nacap proved strategically important.

“ILT members remained objective during discussions, and developed and endorsed common project values to create a sense of cohesion and shared purpose.

“This integrated approach, developed from the outset, was fundamental for developing ‘teamwork’ and a positive workplace culture across the pipeline project.”

These shared values and goals were brought to life across the project through a range of team development activities.

For example, the ‘Game On’ team engagement program proved highly effective in building performance in relation to the key project elements of Safety, Quality, Environment and Progress.

On the pipeline project, safety was recognised as the most important one of four critical elements for project delivery – alongside quality, environment and progress.

As the project moved from planning to critical construction stage, a common approach to safety and progress activity was adopted in order to encourage collaboration and best-for-project outcomes.

Using the common elements of existing safety programs from the different project partners, the pipeline project management developed the ‘Game On’ safety program to ensure a simple, consistent message to help engage work teams and supervisors in safe project delivery.

The Game On program was based on the successful Australia Pacific LNG safety program ‘Every Day is Game Day’, led by rugby league legend Darren Lockyer in his role as safety ambassador.

“The idea of Game On is really just a delivery method for these three concepts, and it proved to be extremely effective,” Mr Swanson said.

Thanks to Game On and to every person who worked on the project, by July 31 2014 the pipeline project had reduced its rolling 12 month Total Recordable Injury Frequency Rate to an industry leading 2.42.

Working with landholders and local communities

Cultivating effective relations with landholders and local communities was another critical aspect of the pipeline project’s success.

A team of pipeline landholder liaison officers was established to maintain relations with local landowners, community groups, and local government to provide information and listen to feedback.

These relations and communication lines were essential for managing discussion about issues such as impacts on roads, road use permits, placement of camps, land access negotiations, cultural heritage and environmental permits, and responding to feedback and complaints.

“The first three years of the pipeline project were all about the approvals and the engineering; about defining the route of the pipeline, and then designing the pipeline – taking into account design safety as well.”

During the pipeline project a total of 260 landholder land access agreements were negotiated, along with numerous permits and approvals at Federal, State and local government level. The last shipment of pipe is unloaded at Gladstone Port.

In parallel with planning activities, logistics and procurement functions shifted into high gear in order to secure necessary equipment and materials, particularly items with long lead times, varying from 42,000 sections of steel pipe, to specialist pipelining equipment such as side boom cranes for laying in the pipe.

It involved a total of 42,000 steel pipes, most at 18 metres in length and half at 42 inches in diameter, and weighing around 270,000 tonnes, delivered via 45 ship movements, around 250,000 crane lifts and 330 train trips. It required close coordination with international manufacturers and shipping agencies, port operations, stevedores, Government departments, rail and road transport operators and construction contractors.

The pipe sections were manufactured in Japan by Nippon Steel for Metal One, coated in Malaysia by WASCO, transported by vessels under charter from Thoresen and Westlink, and unloaded in Australia by Patrick Stevedoring.

Port operations were managed by Gladstone Ports Corporation, with quarantine and Bio-Security services provided by the Federal Department of Agriculture, Fisheries and Forestry.

Pipes were transported from Gladstone via rail by Aurizon Railroad to a central laydown area at Callide, near Biloela and by road to work sites for construction.

The decision to use rail to transport the pipe sections removed around 10,000 heavy truck movements from Gladstone and the surrounding traffic corridor.

Due to the remote location of the project, and the fact that work locations constantly moved as work on the pipeline progressed, workforce accommodation and transport for work teams was a major challenge for the project.  Temporary accommodation facilities or camps were established.

Camp locations were planned so that drive times to and from the right of way were minimised.  MCJV constructed four temporary camps at various locations, NACAP constructed three camps, and two camps managed by commercial operators were also used. Purpose-built, 18-seater four-wheel drive (4WD) buses were used to transport crews to work sites each day.

A combination of buses and commercial/charter aircrafts were used to transport personnel to Brisbane and other destinations on cycle break.

A $20 million upgrade to the Miles Airport funded by Origin on behalf of Australia Pacific LNG and completed in October 2013 helped to further reduce use of private vehicles using local roads for workers commuting. 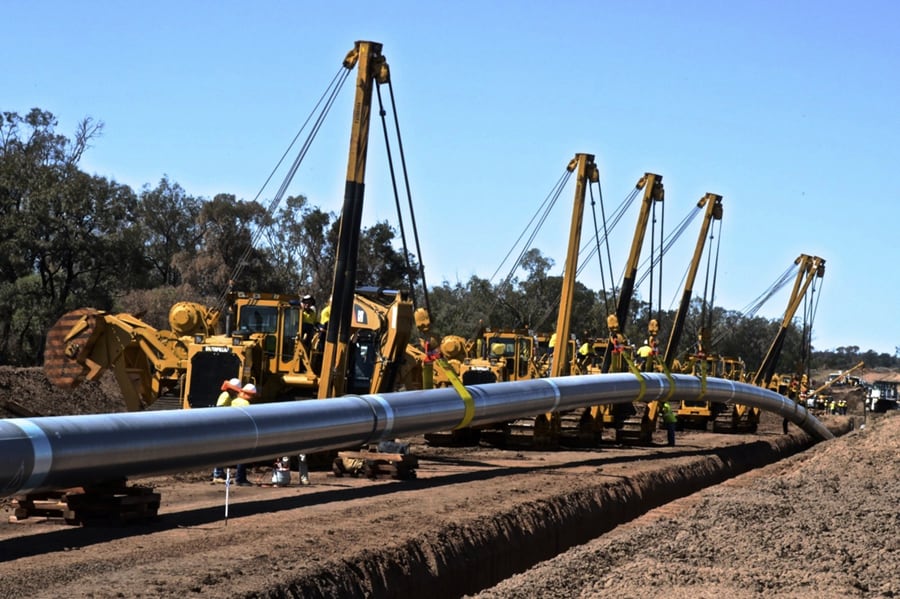 Working on the pipeline gang

A clear and grade crew then removes vegetation, bulldozers and graders level out the right of way to create a working platform for work crews, and topsoil is stockpiled for rehabilitation activities.

Semi-trailers deliver and place pipe sections in preparation for pipe bending and the ‘firing line’ – the automatic welding line which involved over 80 people completing up to 145 welds per day, and covering a linear distance of up to three kilometres.

Automatic ultrasonic and radiographic testing ensure the integrity of each weld, followed by field joint coating where joints that have been welded are sandblasted and epoxy coated.

The ditching crew then digs the trench, followed closely by the lowering-in crew, which lays the pipe section in the open trench in continuous sections of up to 1,200 metres.

Once the pipe is lowered in, it is backfilled and compacted, the topsoil is reinstated and seeded with locally appropriate pasture grasses. Trimming the final section of pipe near Gladstone.

One of the most technically and environmentally challenging aspects of the Australia Pacific LNG pipeline project was crossing the Narrows, a channel separating Curtis Island from the mainland featuring creek, marshland and marine sections with high environmental value.

Australia Pacific LNG and Queensland Gas Company adopted a collaborative approach to the task of installing each respective company’s pipeline across The Narrows.

The two companies agreed to locate their pipelines in the same trench across the Narrows, and install the pipelines simultaneously to minimise environmental impacts. The collaborative approach resulted in the world’s first dual CSG to LNG transmission pipeline project, where MCJV successfully installed both pipes in parallel.

The Narrows crossing pipeline involved horizontal directional drilling to install the dual pipelines, construction of a temporary coffer dam to traverse the marshland section, and winching the completed pipelines through the coffer dam, and then across the open channel.

Once the two pipelines had been constructed, welded and tested, they were moved into position at the entrance to the cofferdam.

The Narrows channel was closed to shipping and a cable was towed from Curtis Island to the mainland and attached to the pipe-header.

A 450 tonne winch on Curtis Island was used to pull the twin pipe strings through the flooded marshland cofferdam and then across the channel to Curtis Island.

Conventional trench and bury techniques were used to install the APLNG pipeline from the Curtis Island winch pad to the APLNG receiver station, which will deliver the gas to the newly-constructed LNG processing plant.

Construction of the main high pressure gas transmission pipeline was safely and successfully completed in July, and the pipeline is now being progressively placed into service.

At the same time, hydrotesting of LNG tanks on Curtis Island has been completed, and gas from the recently commissioned Condabri Central gas processing facility is now being delivered into the gas network.

These milestones play a critical role in the delivery of first LNG in mid-2015, with gas from Condabri Central delivered to Curtis Island through the pipeline system where it will be liquefied and shipped to Asia.