Due to heavy rainfall, Central Coast dam levels are at full capacity, with Central West dams being used to hold back water to reduce flooding.

The Upper Mooney Dam and Mangrove Creek Dam are at full capacity due to ongoing heavy rainfall in New South Wales.

“This storage increase places the Central Coast water supply in a secure position for years to come,” Mr Loader said.

“While the overflow from the Mangrove Creek Dam will contribute to the level of the already flooded rivers, it is a relatively low rate and small in comparison to existing catchment flows. 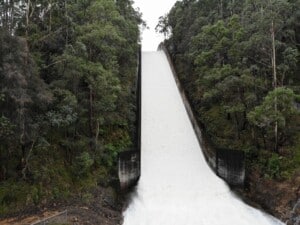 “For comparison, the current flow over the spillway is less than 2GL per day, with the Warragamba Dam spilling at 515GL per day at its peak.

“Although rising water levels are unpredictable during a natural disaster, Central Coast Council crews are on ground monitoring the situation and providing daily advice to impacted communities as required.

“The dam level remains significantly below any levels that require activation of the Dam Emergency Plan.”

Central Coast Council is selecting best quality water sources to use and is currently drawing water from Mardi Dam and the Upper Mooney Dam.

Central Coast Council staff will continue to monitor and optimise treatment processes to ensure the safety of the water provided.

Central West dams have captured large volumes of inflow to hold back water and minimise downstream flooding in the Macquarie and Lachlan valleys.

Burrendong and Wyangala dams have both risen into flood surcharge zones after receiving 430GL and 150GL respectively, from an unexpectedly intense rain event which crossed the state over the weekend.

Both dams functioned to greatly reduce downstream flood impacts by holding the water back to allow significant downstream tributary flows to peak and begin receding, before releases from the dams were increased.

Burrendong Dam, situated on the Macquarie river, is at 132 per cent of capacity and releasing 17GL per day.

The storage has risen from 107 per cent at the start of the inflow event, up to 132 per cent without the need for major releases during the peak inflow period.

The valley’s flood reference panel met on 7 July and agreed on a release strategy to maintain a flow at Gin Gin of approximately 28GL per day to draw storage down to 120 per cent.

Any rain sufficient to generate inflows will delay the draw down. If this situation arises, the release strategy will be revised.

Wyangala Dam, situated on the Lachlan River, is 101.6 per cent full and 21GL above full supply level, with inflows falling to 8.7GL and releases currently 14GL per day.

The rainfall event has so far generated 150GL of inflow to Wyangala dam with a peak instantaneous inflow of 122GL per day on 3 July.

Releases are likely to remain around 10-14GL per day over the coming days to pass inflow and gradually draw the storage below the current surcharged level.

WaterNSW has set up a dedicated incident team to manage the situation and is working closely with the Bureau and the New South Wales State Emergency Service to monitor weather and inflows.