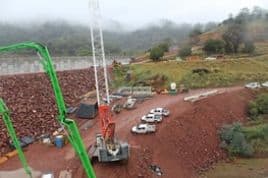 The NSW Chaffey Dam upgrade and augmentation project is nearing completion with 590m3 out of 1,280m3 of concrete poured to raise the spillway.

The upgrade involves increasing the dam’s capacity from 62GL to 100GL and raising the dam wall by eight metres to increase water security to the Peel Valley.

The concrete poured also aims to maximise the strength of the structure.

The project is jointly funded by the Australian Government, the NSW Government and Tamworth City Council.

Engineering contractors, John Holland, was awarded the contract for the project and has carried out the upgrade.

The $18million dam safety component of the upgrade is funded by the NSW Government, which will ensure the dam complies with necessary safety standards in the event of extreme flooding.

Minister for Agriculture and Water Resources, Barnaby Joyce, said, “The upgrade and augmentation of Chaffey Dam will not only help secure long-term water supplies for the growing city of Tamworth, but will also improve the security of water entitlements for downstream users”

NSW Member for Tamworth, Kevin Anderson, said no additional water has been released from the dam for the works, with the storage currently sitting at around 51 per cent.

“Despite the recent rain the dam hasn’t risen significantly meaning we haven’t had to make any additional releases.

“The WaterNSW team will continue to monitor the water level of the dam and forecast inflows and can act if necessary.”

“Work will now continue with installing parapets and guardrails on the dam crest as well as pouring concrete for the raised spillway over the coming weeks,” Mr Khan said.

“At this stage we are on track for completion by April 2016.”

The $31.781million augmentation component of the works is funded by the Australian Government’s National Water Security Plan for Cities and Towns ($18.145million), the NSW Government ($9.668million) and Tamworth Regional Council ($3.968million).

Mr Joyce said this project is one element of the Australian Government’s broader investment in infrastructure that will support more efficient management of water resources and greater water security across Australia.

“Through the Agricultural Competitiveness White Paper, we are investing $500million in a National Water Infrastructure Development Fund to support planning and delivery of water infrastructure projects across the country—including new and augmented water infrastructure, such as dams, pipelines and managed aquifer recharge projects.

“In addition, we are making an average of around $2.5million dollars available each day for infrastructure upgrades across the Murray–Darling Basin to support agricultural productivity and profitability, and deliver economic, social and environmental benefits.”