In the past, the use of trenchless technologies for installing and rehabilitating water and sewer pipelines were considered after other methods such as open-cut. However, water authorities have started to take notice of trenchless, and for those that have embraced these technologies, the benefits have been rewarding. Unitywater, the water and sewerage service provider for Moreton Bay, the Sunshine Coast and Noosa, has made trenchless methods its first preference for pipeline projects.

In November 2016, Unitywater put out a tender for trenchless construction services throughout its operational area.

Simon Taylor, Executive Manager Infrastructure Planning and Capital Delivery at Unitywater, said the tenders were released with some specific pipeline installations in mind.

“We knew that these would be through areas of important environmental considerations, along some major traffic routes, and would also be going past areas of commercial business. If we’d chosen more conventional open-trench type construction, we’d have caused disruption in all three of those areas,” Mr Taylor said.

“So the idea of using trenchless technologies was to limit, or have as little impact as possible in those sorts of areas.

“We released the tenders last November, looking for those services across the network. We put services out which included things like horizontal drilling, pneumatic ramming, some rock breaking, vacuum excavation, and also pipe jacking.”

“Horizontal drilling has gotten underway, as well as some pipe jacking, but the major technology we’re using is horizontal directional drilling. 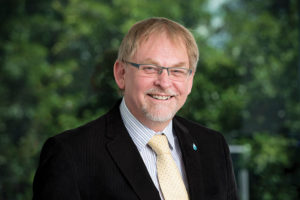 The benefits of trenchless

Mr Taylor said one of the most important benefits Unitywater has realised from the use of trenchless technologies is the reduction of environmental impact.

“The environmental benefits have been very important to us. That’s been a very good outcome, as we’ve been working in areas of great sensitivity, and we haven’t had to excavate in places like reserves, or fragile environments. That’s made a big difference,” Mr Taylor said.

“A great benefit has been the lack of impact on customers and disruptions to road traffic.

“The work is going on in the background without disrupting people.

“That’s really important to us because we’re working alongside main roads and areas of important commercial activity, and to disrupt that would cause some form of cost to people who are our customers. We’re pleased that we’ve been able to significantly minimise disruptions in our communities.”

From open-cut to trenchless

Mr Taylor said that trenchless technologies are being used for both new pipeline installations and the rehabilitation of existing assets.

“The split in expenditure between those two is round about 50/50 as we go forward over the next few years for Unitywater,” Mr Taylor said.

“It’s fair to say that trenchless technology is probably the first adopted technology that we would go to, which wouldn’t have been the case a few years ago.

“Our experience in the last 12 to 18 months or so has really changed our thinking. We now consider how we can use trenchless technology as a first port of call, rather than as an afterthought.

“We can now ask ‘why would we not use trenchless technology?’ whereas a few years ago it would have been, ‘well, that’s a bit novel, do you think it will work in that situation?’”

Mr Taylor said that while the tender process didn’t come up with any new technologies or methodologies, the five-year contract encourages the contractors to look at opportunities to innovate while retaining the certainty of the contract.

“It’s as much about creating the opportunity. There was nothing new at the start, but now we’re exploring the opportunities, with the knowledge of a long-term relationship, so they can trial new things without having to worry. Having that certainty of working with us gives them the chance to develop.”

While open-cut technology may still be acceptable in areas with less existing infrastructure, and less environmental and community impact, in high-density urban areas water authorities need to be seeking alternative technologies.

“I think utilities need to throw away all the old preconceptions about trenchless technologies. Come and talk to those who have used it, and to those who’ve been converted,” Mr Taylor said.

“There are real benefits in using the technology, especially minimising disruptions to other users of utilities or spaces that you might be working in.

“Our construction needs are no longer impacting on locations such as important road junctions, or important environmental sites, because now we simply don’t need to be working in those spaces. Talk to those who have got some real experience. It’s really good technology.”