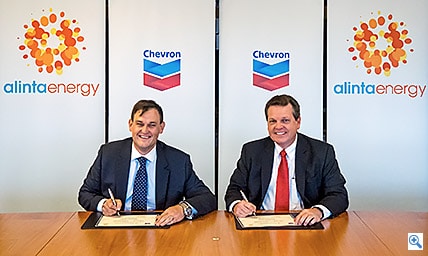 Chevron has signed a domestic sales agreement with a gas retailer for the delivery of natural gas from the Chevron-operated Wheatstone Project in Western Australia.

Under the agreement, Chevron will supply Alinta Energy with 20 Petajoules per year of its equity domestic gas for seven years starting in 2020.

Chevron Australia managing director, Roy Krzywosinski said Wheatstone is a significant new source of energy for Western Australia and will be a leading domestic gas supplier for many years to come.

“We are committed to being a safe, competitive and reliable supplier of domestic gas for Western Australia’s future energy needs and we are pleased to strengthen our longstanding relationship with Alinta Energy,” Mr Krzywosinski said.

“At full capacity, the Wheatstone Project has the capacity to produce 200 terajoules per day (TJ/d) of domestic gas for the Western Australian market.

“This agreement is an important step in Chevron’s rapidly expanding domestic gas business in Western Australia and the establishment of our leading domestic gas portfolio across the Wheatstone, Gorgon and North West Shelf Projects.”

“Securing this agreement demonstrates Alinta’s ongoing commitment to our West Australian customers, and will enable continuation of Alinta’s award winning excellence in customer service and competitive product offerings into the future.”

Wheatstone is expected to deliver domestic gas to the Western Australian market in 2018.

The Wheatstone Project is under construction near Onslow, Western Australia and will consist of two LNG trains with a combined capacity of 8.9 MTPA and a 200 TJ/d domestic gas plant.

Gas from the Wheatstone domestic gas plant is being marketed separately by the Wheatstone Project joint venture participants and will be delivered from Onslow via pipeline to an inlet point on the Dampier Bunbury Natural Gas Pipeline.

Chevron currently supplies 10 per cent of the Western Australian gas market through its participation in the North West Shelf Project.

The Wheatstone Project is a joint venture between Australian subsidiaries of Chevron (64.14 per cent), Kuwait Foreign Petroleum Exploration Company (KUFPEC) (13.4 per cent), Woodside Petroleum (13 per cent), and Kyushu Electric Power Company (1.46 per cent), together with PE Wheatstone, part owned by TEPCO (8 per cent).