The winner of the inaugural Clean Energy Award at the United Nations Association of Australia World Environment Day Awards 2015 has been announced in Melbourne. 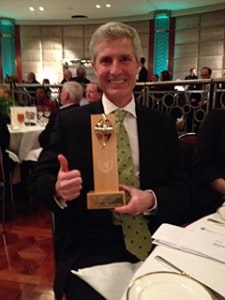 ARENA has taken home the award which recognises the efforts of those working towards a more sustainable future through the development and deployment of renewable energy programmes or processes.

“ARENA is honoured to be the first recipient of this Award,” ARENA CEO, Ivor Frischknecht said at the Awards ceremony on Friday evening.

“We are a relatively young organisation and, as we approach our third anniversary, it is fantastic for the ARENA team and the projects we support to be recognised in this way.

“ARENA targets its investment to advance the renewable energy technologies most likely to deliver an affordable, diverse and resilient energy future for Australians.

“To date, ARENA has committed $1.1 billion in 230 projects that are helping to reduce the cost and increase the use of renewable energy in Australia.

“Our role is unique, in that our support extends across the innovation pathway, from early research to large scale projects on the brink of commercial viability.

“One of ARENA’s goals is to help renewable energy technologies get to market faster by building partnerships, increasing knowledge, reducing risk and attracting investors.

“ARENA’s portfolio of high quality projects includes several world or Australian firsts, many of them at the research end of the development pathway.

“At the deployment end, ARENA is supporting a number of landmark projects, which in total are expected to deliver close to 500 megawatts (MW) of renewable energy almost exclusively in remote and regional Australia.

“In addition to creating jobs, growing skills, advancing renewable energy and contributing to the nation’s economy today, ARENA investment is also laying the foundations for tomorrow’s energy in Australia and beyond.

“I’d like to take this opportunity to acknowledge the professionalism and commitment of everyone who has worked at ARENA since its inception in 2012, as well as our project proponents and other partners.

“I look forward to continuing our work to deliver the next generation of renewable technologies in Australia, home to some of the best renewable resources in the world.”