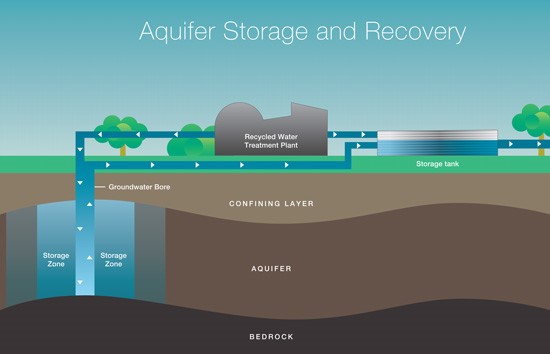 Victorian Minister for Water Peter Walsh has switched on the pumps to trial the Aquifer Storage and Recovery (ASR) project which will store millions of litres of excess water produced from the soon to be completed recycled water facility at the Werribee Treatment Plant.

Aquifers are underground layers of rock or sand which can hold water in the spaces between sand particles or pores in the rock.  Most aquifers already hold water in these spaces, and detailed investigations have shown that the Werribee Formation Aquifer has the potential to store water in large volumes.

The water to be stored is then pumped from the surface and injected into the aquifer so that it spreads through the spaces in the rock or sand closer to the bores. The injected water establishes an area of stored water in the aquifer which may later be accessed when required.

To recover the water the same borehole can be used – the pumps at the surface are reversed and water is extracted from the aquifer and brought to the surface for use. Investigations so far have shown that close to 3.1 billion litres of recycled water per year can be delivered from the Werribee Formation Aquifer.

The ASR project has been funded by the Federal Government’s National Urban Water and Desalination Plan.

Recycled water that can be used for garden watering and toilet flushing by residential customers is due to begin production in 2014.