Water Corporation manages more than 34,000km of water mains across 2.6 million square kilometres of Western Australia, making it the largest water utility in the world in terms of geographical area serviced. This makes it a challenge to detect leaks and save water, so the utility is always looking for new and innovative ways to manage the pipe network. In June 2017, in an Australian first, Water Corporation trialled two sniffer dogs to detect water leaks, and now, a new dog is set to start soon.

The vast length of water mains Water Corporation manages could stretch across Australia, east to west, more than 8.5 times, and demonstrates what a huge undertaking it is to detect non-visible leaks in its system.

Water Corporation spokesperson Louise Fleming said most traditional leak detection technologies are not effective at detecting leaks on long sections of underground water mains across farmlands areas in the Wheatbelt. But an innovative solution to this was found in the use of sniffer dogs which can detect leaks in areas where the traditional methods, such as acoustic or insertion type leak detection, are unsuitable.

“We began a research and development project after one of our employees heard about dogs in South Africa being trained to detect leaks underground by sniffing a substance with a distinctive smell, which had been added to the water,” Ms Fleming said.

“Through our research and development program we carried out a field trial in June using two dogs, which was the first time they had been used for this purpose by a water utility in Australia.”

Ms Fleming said spaniels from working lines, such as English Springer Spaniels, were chosen as they are preferred for this type of detection work in the field.

“These dogs are high energy and nimble, and love hunting out a scent they have been trained to detect; in our case, treated water,” Ms Fleming said.

“Spaniels are traditionally bred to be hunting dogs and are used widely as sniffer dogs due to their acute sense of smell, willingness to work and ability to cover rough terrain.” 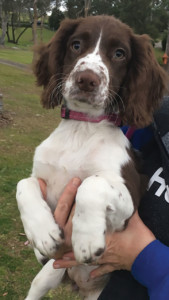 The winning name for Water Corporation’s newest recruit is Kep, a Noongar word for ‘water’.

Learning to sniff out leaks

To find underground water leaks, the detection dogs undergo around 12 weeks of scent and obedience training, the exact duration of which depends on the dog’s age and maturity. The obedience training ensures they will always respond immediately to three commands that their handler may give out in the field: stop, change direction and come.

Ms Fleming said the dogs are trained to recognise the scent of scheme water, and ignore all other scents such as rainwater, pipes and fittings. Their reward for finding the target scent is to chase a tennis ball.

“In June, we carried out trials through our research and development program, using an English Springer Spaniel called Tommy and a Cocker Spaniel called Emma. They were trained in Sydney by one of Australia’s leading dog trainers, Steve Austin, and have now returned to their usual line of work in feral animal, narcotics and explosives detection,” Ms Fleming said.

“The trials were successful, and confirmed that a detection dog is capable of locating a leak in an underground main buried up to 60cm deep. The accuracy of the dogs actually surprised us!

“As a result of the success of the trials we made the decision to invest in our own leak detection dog. It’s a little too early to say if we will bring on more dogs in future – we need to first work with our new pup over the next year to get a better idea of how effective she is in comparison to other programs we run to detect leaks.”

“We held a Facebook poll so the community could vote for their favourite name for our new puppy, with Kep the clear winner from more than 7,450 votes. Kep is a Noongar word for ‘water’ and has one syllable, making it a perfect name for our dog. Noongar people are the traditional owners of the South West of Australia,” Ms Fleming said.

“Four month old Kep has begun 12 weeks of intensive training with Steve Austin in Sydney, before she makes the journey to Perth in the new year to put her nose to work to save our precious water.

“Once she’s finished her training we have already scheduled about 1,000km of mains for our dog to start work on around the Dalwallinu, Pithara, Wongan Hills, Goomalling and Dowerin area.

“In terms of Kep’s paw-formance, we’re confident from the trials we ran earlier this year that Kep will be effective at finding leaks but we will have a better idea of how much she can save once we get further into the program.”

Along with the new leak detection dogs, Water Corporation has a number of programs to reduce the frequency of leaks and breaks.

This includes the use of acoustic technology to locate non-visible leaks for repair, which, in 2015-16, saved around 2.8 billion litres of water. This program involves walking near underground pipes with listening technology and if a non-visible leak is present, specialist equipment is brought in to pinpoint its location.

250 permanent acoustic sensors are also installed on water mains in the Perth CBD to identify hidden leaks early and reduce the frequency of breaks by listening to the flow of water, picking up anomalies in noise produced by potential damage to the water main.

Water Corporation also has an ongoing water pressure management program, which aims to help save over ten billion litres of water each year, creates separate water supply zones which can be easily monitored and managed so that water pressure can be reduced when it is found to be significantly higher than average.