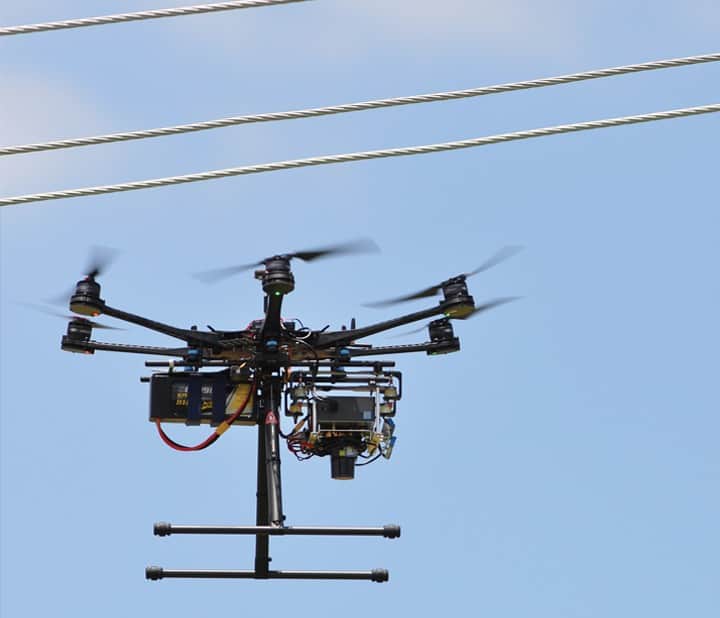 The energy industry is already enjoying some of the benefits drone technology is able to provide, but now a team from Queensland University of Technology and the FrontierSI are researching ways to enhance the benefits for the industry.

According to a recent PwC report1, operational safety and increased automation are two of the biggest challenges – and opportunities – in the application of remotely piloted aircraft systems (or drones) to the power and utilities sector. Globally, there is an estimated loss of $169 billion annually related to network outages. And while using drones to improve asset inventory and maintenance management is on the rise, we are still faced with some critical technological gaps. While current commercial-off-the-shelf drone platforms come equipped with collision avoidance features, these are insufficient to address the needs of the utilities sector, especially when it comes to the automated detection and avoidance of wires in real-time.

The research team from the Institute for Future Environments at Queensland University of Technology has developed a 20-month rapid proof of concept program to address key operational safety issues in the routine use of drones for aerial robotic inspections. Bringing together researchers from industry (Ergon Energy Corporation Limited) and academia (QUT), the successor entity for the CRC Australia and New Zealand for Spatial Information, FrontierSI, has managed the project and allowed the team to answer the following questions:

Piloting a drone close to any object (and not hitting it!) is a challenging task. But when it comes to flying these drones close to power lines, it’s even more challenging, because the pilot has to precisely estimate and control the drone’s location relative to the infrastructure. We needed to increase the autonomy on the drone – that is, to make the drone capable of recognising and avoiding obstacles in real-time, so the onus isn’t solely on the operator.

The benefits from adopting this technology are many – the productivity of data collection is improved, as the operator can concentrate on getting the best quality data, and can also capture that data at a faster rate. The drone pilots also have a reduced cognitive load, meaning that they can operate with reduced risk of damage to the drone and the infrastructure from unintended impact. Pilots can also trigger precision standoff inspection at an operator defined set distance to suit the requirements of the inspection task. And finally, the system allows partial automation of inspection methods, generating and flying self-determined paths between assets under review.

Ultimately, when applied in conjunction with the appropriate regulatory instrument from the Civil Aviation Safety Authority (CASA), this technology may enable the routine adoption of infrastructure inspection using drones in a beyond visual line of sight (BVLOS) environment – opening new markets not economically feasible with current technology.

The team has made significant progress toward the development of such a solution, having conducted an evaluation and selection of sensors after laboratory and in-situ condition testing. Our team  has also fused these sensors into a prototype autonomy package, and integrated this solution onto a professional hexa-rotor platform. Additionally, the team has developed a concept of operations and analysis of sensor coverage for pole, cross-arm and wire detection – key requirements to address the operational specifications of Ergon Energy.

So, what have we found?

The advancements have been tested in simulated environments using the Robotic Operating System for prototyping and testing of the collision avoidance controller. This has then been proven under real-word conditions on the real-life model of power lines at our disposal.

The team behind this work is led by Distinguished Professor Peter Corke, Director of the QUT-hosted ARC Centre of Excellence for Robotic Vision (ACRV), and Associate Professor Jason Ford, from QUT’s Robotics and Autonomous Systems discipline. Associate Professor Ford has a rich history of delivering projects in support of the utilities sector, having been the architect behind the development of the automated flight path planning and control system that enables the Fugro ROAMES data capture via general aviation aircraft (typically Cessna 206 light aircraft). That project, also conducted with Ergon Energy and FrontierSI (formerly CRCSI), has seen the deployment of a solution that saves Ergon Energy an estimated $40 million per annum in vegetation management costs alone.

Working closely with QUT’s Research Engineering Facility and the Ergon Energy RPAS team, the research group comprising Professor Corke, Associate Professor Ford, Dr Feras Dayoub, Dr Aaron Mcfadyen, Dr Steven Martin and Mr Matt McTaggart have been able to make accelerated progress toward implementation of a prototype solution, and have tested it in real-world environments –  critical to the delivery of a robust system suitable to the end-user requirements.

These three challenges assist the group with prioritisation of the projects that they take on – with robotics becoming a “must have” in the innovation space, careful selection of projects from the perspective of what is achievable and what will have the greatest impact is becoming increasingly important. Fortunately, the three domains are sufficiently broad enough to encompass the majority of sectors that approach the group for partnership.

With the project coming to a close in the next few months, the focus for the team is to finalise delivery of a semi-automated inspection of a series of power poles. This will see the drone automatically ascend relative to a power pole (and maintain minimum separation from detected obstacles such as poles, cross-arms and wires), conduct an orbital inspection of the cross-arms from a fixed position above the pole top, then automatically detect and follow the wires to the next pole in order to repeat the inspection regime.

Coupled with this deliverable is the composition of a business case to affect the maturation of the sensor package into a commercially viable solution – progressing it through technology readiness levels – something the team has previously delivered for multiple parties in similar domains.

Ultimately, it is hoped that the adoption of technologies such as those being developed by the QUT team will yield both economic and safety improvements for the sector and make drones just another tool to be deployed by the field service teams.