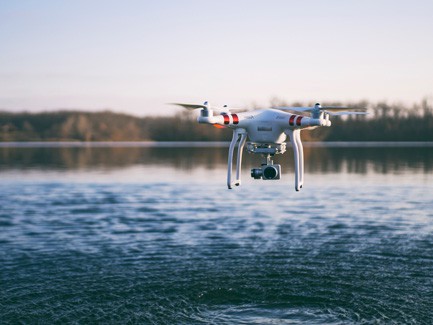 The Queensland Government is using drone technology to assess water levels in dams and bores in remote areas.

“Many of these activities could previously take days of labour-intensive effort, but with drones they can now be accomplished in as little as a few minutes,” Mr Furner said.

Drones can also be used by farmers to map water flows and drainage lines, site new dams and irrigation points, and plan new drains and catchments.

Queensland is at the forefront of drone technology in Australia, with Premier Annastacia Palaszczuk unveiling the country’s first ‘drone strategy’ at the inaugural World of Drones Congress in Brisbane 2017.

Ms Palaszczuk said the aim of the program is to build local industry capability in drone research, design and development, which will in turn attract investment and create jobs in the state.

This has already had flow on effects for water, with the Queensland Government developing drone technology that protects an important agricultural product – sugarcane – as well as local waterways.

“The Queensland Government has developed a drone that can fly over sugar cane fields, identify weeds and take them out with a targeted shot of herbicide. This saves time, money and helps to reduce herbicide runoff into local waterways,” Mr Furner said.