The trial is part of the Queensland Government’s push to increase the uptake and availability of renewable energy.

Five regional sites were initially selected to host six network-connected batteries with a total storage capacity of up to 40MWh.

Energy Queensland CEO, Rod Duke, said nine potential sites have been identified for the new batteries and will be now assessed, in depth, for suitability.

“This announcement provides Energy Queensland with the tools it needs to deliver on the next stage of our Local Network Battery Plan,” Mr Duke said.

“I recently spoke at Australian Energy Week about the need to drastically increase the storage capacity in Queensland –now we can start doing that.

“The new batteries will be spread across major centres in regional Queensland near communities that have significant rooftop solar generation because we know that’s where they will have the greatest overall benefit.

“The network of the future will not only need to move electricity from where it is generated to where it’s going to be used, but also to when it’s consumed.” 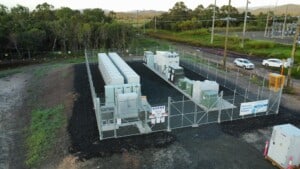 “We now have 8MWh batteries at Bohle Plains and Black River near Townsville, Kleinton near Toowoomba, Baraga near Bundaberg, Tanby near Rockhampton, and at Torquay near Harvey Bay,” Mr Duke said.

“We are close to having all of these first six batteries constructed, commissioned and operating on the network.

“Having more storage capacity will enable us to move electricity in both space and time … and that will lead to greater network stability and reliability for customers.”