EnergyConnect: meeting the challenges of a remote environment Project EnergyConnect, once approved and constructed, will directly link the energy networks of South Australia and New South Wales for the first time.

The ISP is a roadmap to ensure Australia has a resilient and secure grid to accommodate future renewable energy, and promote a decarbonised future. The project has passed a cost-benefit analysis, overseen by the Australian Energy Regulator (AER) and is progressing through the final phase of a rigorous approval process.

The challenges of delivering EnergyConnect are being assessed, including the transmission route, the construction of transmission lines and substation requirements.

EnergyConnect will enable the renewable wind and solar energy generated in South Australia to flow into the New South Wales grid, helping stabilise prices in the National Energy Market (NEM).

Transgrid will build the New South Wales section of EnergyConnect, ElectraNet will deliver the South Australian component and Secure Energy has been appointed as the primary contractor.

The challenges of distance

Yousseph Ters, Transgrid Project Integration Manager, said, “The stability of the network is vital, with outages requiring quick remediation, which will be a challenge given the remoteness of the transmission and substation infrastructure.”

Innovation vs tried and tested technology

“We need to demonstrate the value that EnergyConnect will provide, balancing the concerns of landholders and affected communities with environmental, heritage and economic constraints,” Mr Ters said.

Transmission towers to suit the terrain

EnergyConnect is using innovative guyed tower technology, consisting of a single mast with guyed wires that spread out diagonally, providing the support required for the tower.

Guyed towers are used extensively in the US, South America, Africa and Europe in locations where the topography is flat. Australia’s grid is often in hilly and rocky areas, so this will be the first use of double circuit guyed towers in Australia, with EnergyConnect using a blend of guyed and self-supporting towers.

Transgrid and Secure Energy are investigating the use of helical screw piles for new tower foundations for EnergyConnect – if deemed feasible, the screw piles will save time and money, and be the best environmental choice.

“Helical screw piles are like what they sound. We literally screw the foundations of all transmission towers into the ground with a special machine, rather than dig a foundation and fill it with concrete, which is how towers in Australia are most commonly constructed,” Mr Ters said.

“With this alternative method to build tower foundations, we will save around 6GL of water, the equivalent of 2,400 Olympic swimming pools.”

Helical screw piles also generate a lot less spoil, as foundations do not have to be excavated.

A new, third substation will be built roughly at the halfway point between the two, 40km south of Coleambally, at Dinawan, which is the local First Nations word for “emu”.

“We needed an intermediary point between the existing substations to add reactive support to the network. Switchgear at Dinawan substation will include reactors, capacitor banks and synchronous condensers,” Mr Ters said.

“The section between Dinawan and Buronga will be 376km, which will be the longest continuous section of transmission line on the Transgrid network. This will also allow for a logical connection point for the proposed South Western Renewable Energy Zone.”

The remoteness of Dinawan and Buronga substations, coupled with EnergyConnect’s regulatory requirements, requires technology resilience at the highest levels.

“We came to the conclusion that air insulated switchgear, which is identical to the majority of what we have on the rest of the network, is best for EnergyConnect”. 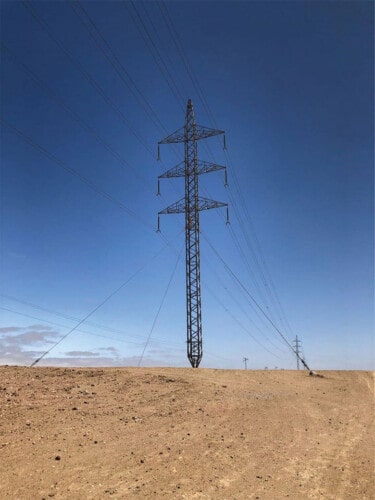 A guyed tower, used in the EnergyConnect project for the first time in Australia.

The Buronga substation, through EnergyConnect, will become one of Transgrid’s largest substations, converted from 220kV to 330kV. Phase shifting transformers and two of the four synchronous condensers of EnergyConnect will be installed at Buronga.

It will have 15 diameters of breaker and a half 330kV switchgear, which will be the largest on the New South Wales network.

The Wagga Wagga substation switchgear will be upgraded with four new double-switch switch bays, which will improve the reliability of other lines connecting into the substation.

“We have taken a cautious and minimalist approach at the existing Wagga Wagga substation, which was built over 60 years ago,” Mr Ters said.

“For EnergyConnect we have had to consider the most cost-effective completion of the project while considering the needs of future projects currently in the planning phase.”

A new 330kV substation will be built at Dinawan, between Buronga and Wagga Wagga, with the potential to be upgraded to a 500kV site and become an interconnection point for renewable energy supply.

Dinawan substation will provide reactive support with capacitor banks, reactors and two synchronous condensers to manage the voltage on the line, and four breaker and a half diameters of 330kV switch gear.

While being initially operated at 330kV under the EnergyConnect Project, the transmission line from Dinawan through to Wagga Wagga will be able to be operated at 500kV.