You would not expect to find saltwater crocodiles in the suburban streets of Alice Springs. But a new innovation in town, named after famous Top End crocs, is a central feature of a power pole replacement program currently underway. 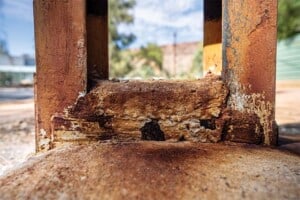 Each measuring five metres long, the fixtures are large-scale clamps that hold steel poles in position while works are undertaken to re-make corroded pole bases on the spot.

“Steel poles can fall over if the steel below ground rusts away and in the past, complete pole replacement has been the only option to address this issue,” Power Services Acting Executive General Manager, Dr Stephen Vlahovic, said.

“This is expensive, slow and disruptive for customers. It is a lot of work considering the only part of the pole that has deteriorated is below the ground.

“We developed the concept design of the pole fixtures and led the detailed design, technical analysis, fabrication and testing to develop a solution fit for the Territory.” 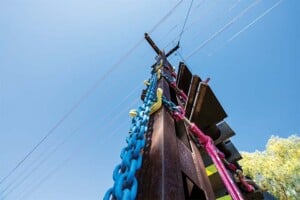 After the flooding of the Todd River in 2015 saw the failure of a steel power pole due to corrosion, Power and Water commenced an inspection of pole footings across Alice Springs.

The inspection data along with soil chemical analyses were analysed in the Corporation’s Geospatial Information System to identify pole locations with a high likelihood of corrosion, and build risk profiles for each pole in consideration of the environment, social and physical influences.

The majority of the town’s power poles were found to be at risk of failure due to subsurface corrosion – an unexpected result given Alice Springs’ dry climate. Replacing an in-service pole is expensive and customers experience a lengthy interruption to power supply while works are undertaken.

The current practice requires a power outage of around six hours and stresses the adjacent poles and wires, placing them at increased risk of failure. In response to these problems, Power and Water engineers and maintainers, supported by a local engineering firm, invented the pole fixtures.

Four pole fixtures were manufactured by a local Territory business, each weighing in excess of 2.5 tons. Each fixture, which has the capacity to restrain up to 32 tons, will work on poles of any height, size or pole top arrangement, including legacy I-beam poles erected in the 1950s and 60s.

After being trucked to a pole requiring maintenance, the fixture is lifted into place using a knuckle boom crane, all the while maintaining safe distances from the live electrical conductors.

The fixture’s steel jaws will clamp down on the pole, allowing the corroded below-ground section of the pole to be removed without a power outage in most cases.

“Once the pole has been clamped the corroded base of the pole can be re-made by removing the corroded base, welding on new steel and pouring the concrete footing to establish a barrier between the pole and the corrosive soil, preventing future corrosion,” Dr Vlahovic said.

“Any cables going from the pole top to underground are encapsulated in conduit and made into the pour without being disconnected.

“Once the concrete is set, the clamp is removed and the job is complete.”

And to monitor the hardness of the concrete, Power and Water is using sensors to determine the point at which the pole tip load will be overcome.

“We are able to monitor the temperature and moisture of the concrete, which then tells us when we are able to safely remove the fixture and move on to the next pole,” Dr Vlahovic said.

The fixtures are expected to help save millions of dollars in repairs and maintenance costs and will eventually eliminate the need for power outages during pole replacement work.

Dr Vlahovic said the use of the fixture could also result in minimal interruptions to the town’s streetscape and community, reduced traffic control requirements and limited customer outages.

“It’s an outstanding innovation,” he said.

To date, around 300 power poles have been rebutted. The pole replacement project in Alice Springs was identified as being one of the largest planned capital investment programs for Power and Water’s Power Services team in recent times.

The use of the fixtures will also result in a 60 per cent savings compared to the previous pole replacement program options.