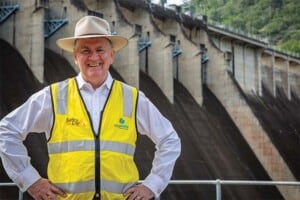 For Seqwater, maintaining and improving $12 billion of traditional and climate-resilient water supply assets is what continues to allow the utility to deliver approximately 280,000 million litres of drinking water a year for SEQ.

Approximately $8.2 million has been spent in the 2019-20 financial year on vital projects to improve the health of SEQ’s drinking water catchments.

Mr Brennan added that about $5 million had been allocated to partnership projects, and Seqwater had been working with land care, natural resource management and conservation groups, local governments and directly with landholders across the region to deliver its program of catchment improvement works.

“These projects have taken place across a number of catchments across SEQ and include: riparian weed control and revegetation work, landslip remediation and bank stabilisation, on-site wastewater system upgrades and other on-farm improvements,” Mr Brennan said.

“This work with the community to restore our drinking water sources and protect water quality, is going a long way to creating a safer, more reliable and cost-effective water supply.”

Mr Brennan said Seqwater’s catchments were one of the most highly-developed and ‘open’ in the country, with some areas containing farmland, rural properties, degraded waterways, industrial facilities and growing townships.

“Water treatment starts on our catchments, and Seqwater works hard with the community to improve catchment health and protect the quality of water entering our water treatment plants.

“Through working with established catchment groups across the region to carry out these projects, it’s allowed Seqwater to tap into local knowledge and better connect with the communities we serve.”

Highlights of the 2019-20 partnership program include:

To support its commitment to a safe, sustainable and efficient water supply, Seqwater is upgrading several of its water treatment plants.

The Mt Crosby Water Treatment Plants, both East Bank and West Bank combined, are critical to the operation of the SEQ Water Grid and can provide up to half the region’s daily water supply.

The project, which commenced in March 2020 and is expected to take more than two and a half years to complete, will deliver major improvements to the plant’s filter design and control.

Aqseptence Group Australia was engaged by Seqwater to design, manufacture and install over 6km of Triton Underdrains for the Mt Crosby filtration upgrade project.

In light of the COVID-19 pandemic, suppliers such as Aqseptence Group are urging water utilities to support and work with local supply chains to minimise the impacts of the pandemic and ensure greater resilience in future.

Filters play an essential role in the water treatment process, assisting with clarifying water prior to disinfection.

The upgrade work will help the plant be better able to treat water with high levels of turbidity or sediment which can result from extreme rainfall events across the Wivenhoe catchment, washing soil and debris into the creeks and waterways.

The SEQ Water Grid will be used to supplement Brisbane’s water supply while the refurbishment works are being undertaken.

Works are being staged to ensure water supply is maintained, with six filters being taken offline at a time.

An $800,000 upgrade of the Kenilworth Water Treatment Plant commenced in June 2020, to improve the treatment process and treated water quality. The project is expected to take approximately four months to complete.

Mr Brennan said Kenilworth was one of 16 off-grid communities across SEQ, which meant it was not connected to the SEQ Water Grid and relied on local water sources.

“Without the availability of the grid, it’s important that our off-grid plants continue to operate safely and reliably to meet the water demand for these regional communities,” Mr Brennan said.

Previously, the town was receiving water via tanker from Kilcoy since the old plant, built in 1970, flooded and was forced to close in 2013.

“Following the initial assessment, it was considered more economical, reliable and effective to construct a new plant to be able to ensure local water supply security into the future.” 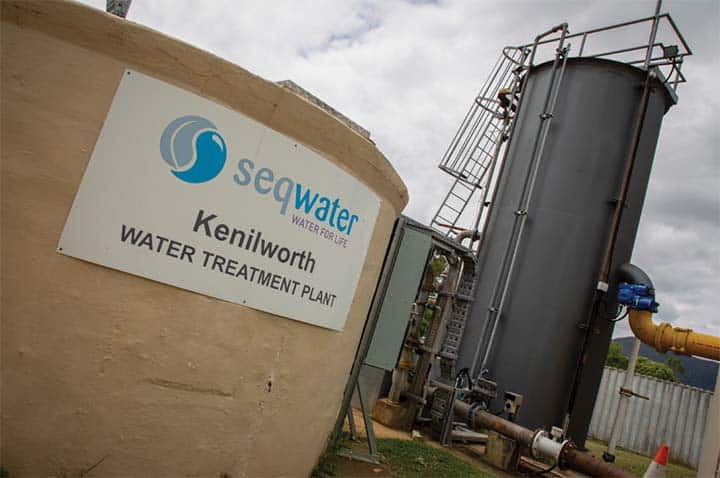 Upgrades to the Kenilworth Water Treatment Plant commenced in June 2020.

Maintaining and improving an extensive asset base

In addition to catchment management projects and water treatment plant upgrades, Seqwater has also been hard at work enhancing a variety of its other assets.

At the beginning of the year, a number of improvements were made to the Sparkes Hill Reservoir, which holds up to 16 per cent (94ML) of Brisbane’s water supply.

Mr Brennan said the need for improvements at Sparkes Hill were identified following an engineering assessment in 2018.

“The reservoir was originally constructed in the 1970s and just like our dams and treatment plants, these are long-life assets and require continual monitoring and maintenance.”

In 2012-13, Seqwater commissioned an independent review, which found improvements are needed at many of its 26 regulated dams to meet Queensland’s dam safety guidelines and bring them in line with the latest engineering standards.

Seqwater is carrying out improvement works at a number of its dams:

The pipeline will connect to the two recently-built reservoirs at the existing Beaudesert Water Treatment Plant– and to the SEQ Water Grid – by 2022.

Once connected, the local community will have access to up to 10ML of drinking water daily – more than double what is currently available. A climate of extremes

Seqwater operates in a challenging and changing environment. Since the Millennium Drought, SEQ has experienced two large floods and a lengthy drought, and Queensland’s climate is expected to become increasingly variable.

The utility is involved in a research project that is using palaeoclimate data to better plan and prepare for extreme floods and droughts in Queensland.

Palaeoclimate data, such as that found in ice cores, tree rings or corals, can extend hydroclimatic records by thousands of years, providing greater insight into what is possible in terms of drought frequency and duration.

The project provides an opportunity to develop a methodology to incorporate palaeoclimate proxy data into water security planning for Queensland.

Specifically, it provides a methodology for the inclusion of this data into climate adaptation and water security programs by using specific case studies in Queensland.

It also delivers an online database of all local and remote data that can be used for the purpose of modelling and managing flood and drought risk in Queensland under a changing climate.

Seqwater is also developing a business-wide Climate Resilience Strategy to deal with the many impacts of a changing climate.

Seqwater has worked with the State Government in the development of the strategy and it features as a case study within the Queensland Government’s own Climate Adaptation Strategy.

In line with its legislative responsibility, Seqwater has developed and amended its Water Security Program – a long-term plan to manage water security across the region.

This program includes triggers for activating drought response and actions that aim to manage the water supply and demand to ensure that the region does not run out of water.

The biggest single change since the Millennium Drought has been the construction of the SEQ Water Grid which allows Seqwater to move treated drinking water around the region.

The connected water treatment plants and pipelines across the grid, and the availability of the Gold Coast Desalination Plant and the Western Corridor Recycled Water Scheme to respond to drought, means the region has more resources at its disposal than ever before to manage drought.

Seqwater also regularly monitors the level of water in its dams (the drawdown), rainfall frequency, duration and volume. This monitoring is compared to previous data to understand any significant changes.

For Seqwater, innovation is the key to working smarter, operating its water supply more efficiently and meeting the challenges of climate change and population growth as it plans for the region’s future.

In December 2019, the utility became a member of WaterStart, a not-for-profit organisation that provides water innovation services to water management agencies, technology companies and policymakers to spur economic growth in the water sector.

Mr Brennan said the WaterStart partnership offered the opportunity to work with its retail customers in SEQ to identify common challenges and potential solutions, not only for SEQ but water providers across Queensland.

“One of the big attractions of working with WaterStart is the opportunity to leverage off technology solutions which have already been piloted, proven and implemented by WaterStart and its members in the US,’’ Mr Brennan said.

“Across the water sector there are a range of similar issues and challenges we all face. Our aim is to ensure that the outcomes of technology pilots and solutions identified are shared across Queensland, particularly in the smaller regional communities that may not have the resources to participate directly.

“The innovation we identify and implement, we want to be able to share for the betterment of the water sector across Queensland.

The WaterStart platform will allow us to do just that.’’