It was only a few short years ago that the idea of producing your own free, clean energy during the day, and storing that electricity in your car for use overnight, either locally or in the grid, was the realm of pure science fiction. But the increasing popularity and storage capacities of electric vehicles, combined with drastically reduced solar photovoltaic costs, could turn that fiction into a reality.

The potential for electric vehicles (EVs) to replace dirty, CO2 emitting internal combustion engines (ICEs) has been recognised for decades and remains the main goal of the technology, with a growing impetus to curb man­made climate change hastening development of EV technology and market adoption.

Although EV batteries (as opposed to electric motors) are still in their relative technological infancy, cars such as the Tesla Model S and BMW i3 have proven that driving an electric vehicle doesn’t have to be a story of personal sacrifice for the sake of saving the environment (or giving the finger to ‘big oil’).

Drastically increased range and performance characteristics comparable with ICE competitors have helped EVs to go increasingly mainstream, and while only currently enjoyed by a handful of early adopters, the predicted (some would say inevitable) technology cost reductions have the potential to rapidly hasten the uptake of zero emission EVs. (The missing piece of the puzzle in Australia is government incentives for EV uptake, but that’s a topic for another article.)

There are distinct challenges and opportunities for utilities in the future mass charging of EVs. While EV charging promises to be a large new source of electricity demand, uncontrolled charging could stretch or even break current infrastructure, in contrast to the belief held by many that the grid is gold-­plated and overcapitalised.

However, the reality of a future with higher uptake of EVs is more complicated than just the demand side of the equation. Beyond the ability of EVs to replace fossil fuel burning cars on our roads, it may be that the development of electric transportation could have the added benefit of helping to increase the amount of renewable energy that can be stored and used by car owners, and the grid.

As we all know, renewable energy has one major disadvantage over traditional forms of power generation such as coal, gas and nuclear: intermittency.

All forms of supply intermittency (whether short or longer term) make it difficult for grid operators to meet demand, which is also highly variable and largely out of the control of utilities, even with the increasing application of demand response measures. 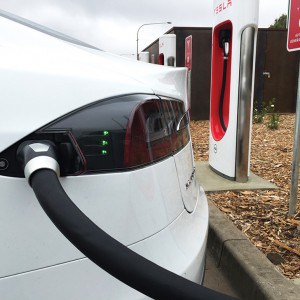 A Tesla Model S plugged in and charging.

One solution to smoothing the intermittency that characterises renewable generation is of course energy storage.

Energy storage has added benefits in that it can also be used for frequency regulation when the load diverges significantly from the available supply on the network, and can assist with network augmentation deferral and improving power quality.

However, while costs have come down significantly in recent years, augmenting households with solar photovoltaic (PV) installations – let alone entire networks – with storage is still an expensive and difficult proposition.

But as the broader energy storage revolution continues to edge towards economically viable and reliable utility­scale storage, many experts are examining the possibility of using EVs – which can be simply perceived as just large batteries on wheels – as energy storage devices for the grid (known as EV2G for short).

Indeed, some pilot projects on intelligent EV2G systems are already underway in the US, China and Europe.

The key to grid integration of EV-­based storage is the aggregation of individual vehicles into a critical mass of total storage, with a combined capacity to palpably impact the grid. Individual storage capacities of single cars for grid integration are currently in the range of only 1 to 95kWh – or 0.2 to 19kW output over a five-­hour discharge of full capacity.

However, there are many informational uncertainties and infrastructure voids which would need to be overcome to make EV2G feasible. Physical infrastructure in the form of a network of chargers in places such as car parks and workplaces will be required.

These will take time to build and will be expensive to implement; however, it is likely that market forces alone should eventually provide this physical infrastructure as a response to greater EV uptake.

However, in addition to physical infrastructure, EV2G systems will require significant informational infrastructure to operate. This will require the construction of a deep information layer, including data on individual EVs, their parking status, storage capability, power flows, state of charge, and the preferences and constraints of car owners – and these are just some of the datasets required to effectively realise EV2G. Electric vehicles and chargers on the UNSW Kensington campus.

The maintenance and development of this infrastructure will likely fall to a new form of enterprise – a storage aggregator – which will develop and maintain battery management systems and user interfaces, information collection and distribution, and control of charging/discharging of EVs based on, for example, market signals from the National Electricity Market (NEM).

But before we get too carried away, it is pertinent to ask a slightly more basic question about using EVs as batteries for the grid or the home: should, and would, we do it?

It must be remembered that – currently at least – electric cars, like their ICE predecessors, are built and marketed as a personal transportation solution, not a personal (or communal) energy storage solution. They are simply not designed with EV2G functionality in mind.

To make an analogy, using a current generation EV as if it were a grid­connected battery is akin to running the engine of your VWGolf, even when you are not driving it, for use as a diesel generator.

Sure, you could provide some useful spinning reserve to either your home or the grid by doing this, but for obvious reasons, this is not a good idea on many levels – an ICE car is simply not designed for this type of usage and you would most certainly kill the motor in short measure, all the while voiding the manufacturer’s warranty.

The same is true for an electric car, where each charge/discharge cycle will reduce the life of its chemical batteries. On top of that, there are also significant conversion losses of about 20 per cent in each direction (charge and discharge), adding further cost to the EV2G concept.

Aside from the physical and informational infrastructure needed to make EV2G a reality, it is essential that car makers themselves embrace the idea of using their vehicles as multi­purpose transport and energy storage devices.

The most likely candidate to do this is Tesla, as it has expertise and products in both home energy storage and EVs. Whether or not it makes business sense for Tesla to replace two of their current successful products (the Model S and the Powerwall) with a new do­it­all EV model is another matter.

So while it is certainly an area worthy of further research and development, it is unlikely in our view that EVs will support grid or home energy needs in the foreseeable future (repurposing second-­life EV batteries in the decades to come may prove to have more potential in this regard than actual, functioning vehicles).

While it is tempting to think of EVs as giant batteries on wheels, they are designed for a completely different purpose, and this severely limits the feasibility of the EV2G concept, unless their design changes. Therefore, utilities are perhaps better served focusing on the demand side challenges generated by increased EV uptake into the future.