Seqwater has repaired scouring and erosion at the toe of Borumba Dam in South East Queensland in readiness for the summer months.

The repairs were required as a result of damage caused by the January 2011 floods.

The toe, made of rock, sits in front of the dam wall and almost 3,600 tonnes of rock was brought in to provide extra protection against erosion. Being so close to the waterway, Seqwater commissioned an environmental study before starting the works to ensure any possible impacts were minimised.

The January 2011 flood waters also deposited around 12,000 tonnes of gravel in the outlet channel downstream of the dam spillway. The gravel has been cleared to improve outflows from the dam.

The remediation works began in May after the wet season to reduce the risk of outflows over the ungated spillway during construction. The timing of the project also allowed for the works to be finished before the Christmas holidays so there would be no impact on the popular camping spot downstream of the dam.

Despite several construction days lost to wet weather and challenges experienced while moving water from one section of the plunge pool to another to allow for access, the works were completed in less than five months.

Essential repairs to Mt Crosby Weir, a critical link in Brisbane and Ipswich’s water supply chain, have also been completed.

Mt Crosby Weir is one of the most important assets in South East Queensland’s bulk water supply system. Water from the weir is pumped to the region’s largest water treatment plants, which supply most of Brisbane and Ipswich’s drinking water.

A diver sent in to inspect the weir and associated infrastructure following Ex-Tropical Cyclone Oswald in January discovered significant damage to the structure, most likely caused by the huge volume of water and debris that flowed down the Brisbane River as a result of the wild weather.

Work at the weir included hauling out a 22-tonne log, which was wedged in one of the two intake pipelines to the Mt Crosby East Bank Water Treatment Plant.

Once the log was removed, about 300 tonnes of rock and sediment that had accumulated in the intake pipeline had to be cleared away.

The repairs began in late June 2013 and, despite a number of challenges including the need to build a coffer dam to confine the flow of the Brisbane River to allow for a detailed inspection of the structure to be carried out, the works were completed in less than five months.

Originally built in 1926, the remediation works were the first major maintenance works at the weir since it was transferred to Seqwater in 2008.

Both repair projects are part of an extensive program of works Seqwater is undertaking to prepare for the 2013-14 wet season. 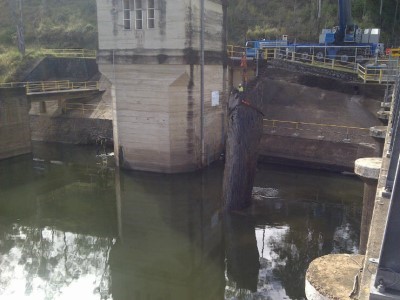 The 22-tonne log being removed from the intake pipeline at Mt Crosby Weir.