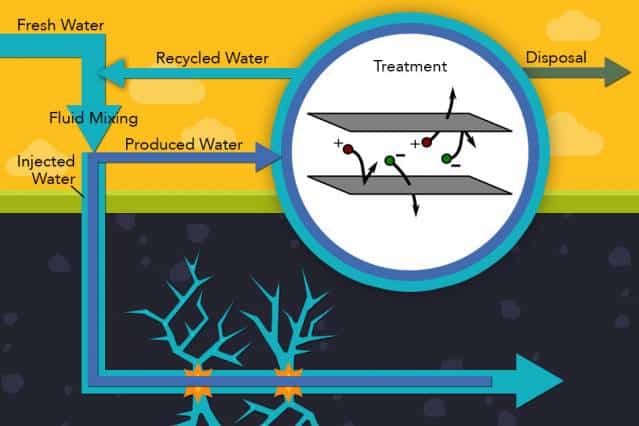 While the boom in oil and gas produced through hydraulic fracturing has been welcomed as a solution for global energy needs, until now there has been no means of dealing with its unfortunate by-product: millions of gallons of water left much saltier than seawater after leaching salts from rocks deep below the surface.

Now researchers at MIT and in Saudi Arabia say they have found an economical solution for removing the salt from this water. The new analysis appears in the journal Applied Energy, in a paper co-authored by MIT professor John Lienhard, postdoc Ronan McGovern, and four others.

The method they propose for treating the “produced water” that flows from oil and gas wells throughout their operation is one that has been known for decades, but had not been considered a viable candidate for extremely high-salinity water, such as that produced from oil and gas wells. The technology, electrodialysis, “has been around for at least 50 years,” says Lienhard, the Abdul Latif Jameel Professor of Water and Food as well as director of the Center for Clean Water and Clean Energy at MIT and King Fahd University of Petroleum and Minerals (KFUPM).

“Electrodialysis is generally thought of as being advantageous for relatively low-salinity water,” Lienhard says — such as the brackish, shallow groundwater found in many locations, generally with salinity around one-tenth that of seawater. But electrodialysis also turns out to be economically viable at the other end of the salinity spectrum, the new analysis shows.

Produced water from fossil-fuel wells can have salinity three to six times greater than that of seawater; the new research indicates that this salt can be effectively removed through a succession of stages of electrodialysis.

The idea would not be to purify the water sufficiently to make it potable, the researchers say. Rather, it could be cleaned up enough to enable its reuse as part of the hydraulic fracturing fluid injected in subsequent wells, significantly reducing the water needed from other sources.

Lienhard explains that if you’re trying to make pure water, electrodialysis becomes less and less efficient as the water gets less saline, because it requires that electric current flow through the water itself: Salty water conducts electricity well, but pure water does not.

McGovern, a postdoc in MIT’s Department of Mechanical Engineering and lead author of the paper, says another advantage of the proposed system is “flexibility in the amount of salt we remove. We can produce any level of output salinity.” The costs of installing an electrodialysis system, he says, appear to compare favorably to other widely used systems for dealing with produced water.

It’s not clear at this point what the optimal salinity is for fracking fluids. “The big question at the moment is what salinity you should reuse the water at,” he says. “We offer a way to be able to control that concentration.”

Before reaching the desalination stage, the researchers envision that chemical impurities in the water would be removed using conventional filtration. One remaining uncertainty is how well the membranes used for electrodialysis would hold up following exposure to water that contains traces of oil or gas. “We need some lab-based characterization of the response,” McGovern says.

If the system works as well as this analysis suggests, it could not only provide significant savings in the amount of fresh water that needs to be diverted from agriculture, drinking water, or other uses, but it would also significantly reduce the volume of contaminated water that would need to be disposed of from these drilling sites.

“If you can close the cycle,” Lienhard says, “you can reduce or eliminate the burden of the need for fresh water.” This could be especially significant in major oil-producing areas such as Texas, which is already experiencing water scarcity, he says.

While electrodialysis technology is available now, Lienhard explains that this application would require the development of some new equipment.

Jack Gilron, who studies desalination and water treatment at Ben Gurion University in Israel and who was not involved in this research, says the team has “created an impressive demonstration of their systematic approach to analysis of [electrodialysis] performance [in] the produced water system.”

However, he adds, “The authors correctly point out that the issues of scaling and organic fouling must be answered to actually put [electrodialysis] into practice for this system.”

The work was supported by KFUPM through the Center for Clean Water and Clean Energy, and benefitted from a Hugh Hampton Young Memorial Fellowship and undergraduate student support from the MIT Energy Initiative.