From prehistoric to artesian gold 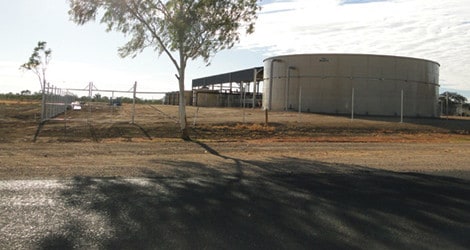 It’s not so often that one hears of a rags to riches water story, let alone one that sees a town’s entire water source transformed into an award-winning drop.

However the small town of Richmond in western Queensland, famous for its paleontological discoveries that include the fossils of prehistoric marine creatures, did just that, and has reinvented their town’s drinking supply to win the ‘best tasting water’ award at the 2014 IPWEA Queensland conference.

This year, following the Queensland state win, Richmond’s water ran to compete with NSW at the WIOA Operations Conference and Exhibition for the title of ‘best tasting water’ between the two states. A competition referred to as the ‘Water of Origin’ of water taste tests.  The competition is held annually and coincides with the Rugby League State of Origin series.

Although Queensland lost game two of the rugby series, they did take home the honour of having the best tasting water between NSW and QLD.  For a small town like Richmond to win such an award against Orange NSW, a larger, better resourced council from south of the border, demonstrates that it can be done, and all communities regardless of size or location have the opportunity and capacity to deliver the highest quality in essential services.

John Wharton, Mayor of Richmond Shire Council, is proud of the town’s achievements. “It has been a great result winning the awards in western Queensland, let alone winning the state title against all the large councils that were finalists,” he said.

“Topping it off with the water of origin win is testament to the Aeramix design team’s process development methods, expertise and their capacity to deliver outcomes at full scale.”

Beyond the honour of receiving the award, Geoffrey also pocketed a trip to attend the New Zealand WIOG Conference and spend a week touring water and wastewater treatment plants expanding his knowledge and further honing his skills.

Geoffrey also presented a paper at the conference detailing his experiences and involvement with the water treatment plant construction, and his learning curve throughout the commissioning and early days operating the plant – for which he took home third prize in the best operator papers category.

The transformation of the town’s water began when high levels of manganese and iron were found to be present in the Shire’s bore water, combined with sulphide, causing strong odours and rusting of pipes.

“People will not invest in a community that has bad water,” said Mr Wharton. “Continual maintenance and renewal of taps and water infrastructure due to the water’s highly corrosive properties was costly to the council.”

Not only were residents complaining of the water’s unpleasant odour and the discolouration of building facades from outdoor sprinklers, the poor water quality meant that water meters could not be installed as they were continually becoming blocked from precipitates of iron and manganese.

Design and installation of the plant was part of the contract, as well as installation of related pumps, pipework, filters, tanks, chemical dosing and connection to the township. The project was a $4million water investment for the Shire and was completed by December 2014. Since the plant’s construction the community of Richmond have benefited greatly from the new water system in multiple ways.

“Since the opening of the new treatment plant, we can now install water meters in the knowledge that they will actually work, and not block up,” said Mr Wharton. “In the past, council had never been able to meter and charge for water, which led to excessive water usage by some ratepayers and extra pumping charges for council.

“Now the people living in Richmond can drink straight from the tap, and good water means a very positive future for Richmond.”

How the new treatment process works

The new water treatment process uses physical and chemical oxidation to aid removal of the iron and manganese. The aeration stage also removes the sulphide smell and softens the water.

The water is then dosed with a coagulant, which attracts the iron and manganese, forming larger particles which are filtered out of the water leaving nearly no traces of iron and manganese while the filter media also absorbs organics.

A small scale pilot plant was developed before the project began, to simulate the treatment process and demonstrate its effectiveness.

Aeramix CEO Cole Harvey said “This was a challenging project. There were fixed assets and treatment infrastructure Richmond Shire had already purchased that the design team had to utilise in the process.

“The results are something the team can all take pride in and it demonstrates our resourcefulness and understanding of how to make these systems work.

“We also utilised local contractors and Richmond Shire operations staff in all facets of the project from design through to construction and commissioning. It was a real team effort and a fantastic experience for everyone involved,” said Mr Harvey.