Stage 3 of the South East Irrigation Scheme in Sorell, Tasmania, has recently commenced operation, and is set to increase much needed water capacity for agricultural land by 6,000ML. Pump Industry spoke with Paul Ellery, Senior Project Manager at Tasmanian Irrigation, to take a closer look at how the scheme was developed and exactly how it will benefit farmers and the community at large.

During the 1980s, the push for a reliable water supply within the low rainfall rural districts north of Hobart brought the Sorell Irrigation Scheme into being.

The area was favourable to the production of cool temperature crops such as lettuces and fruits, and lay within close proximity to population centres.

A reliable water supply would allow the region to become an agricultural gold mine, providing a boost to the state’s economy.

The scheme has since been carried out in three stages, with the third and recently completed South East Stage 3, increasing capacity to 6,000ML over two delivery periods.

The first stage of the scheme began in 1985 with the construction of the Craigbourne Dam, located on the Coal River. The dam was built to release 5,400ML per annum into the river, to make 3,500ML of water available to be pumped onto farms within the district.

Stage 2 involved extending the scheme, by pumping water from Richmond to Cambridge through underground pipes. Stage 2 was completed in 1991 and supplemented in 2000­01 by the construction of the Daisy Banks Dam. This dam enabled water provided by Hobart Water to be linked into Stage 2.

According to Mr Ellery, reliability of supply was the focus for Stage 1. Stage 2 enabled farmers to grow a wider variety of agricultural produce.

“The region is low rainfall at around 500 to 600 millimetres per year, so before the scheme began, the area could only be used for sheep and cattle. Stage 2 allowed for the production of more intensive crops, and today there are apricots, cherries and many vineyards within the area.

“A major player within the region is a lettuce growing company called Houston’s Farm, which is one of the  largest agricultural producers in Tasmania. Without irrigation water, no fruit or vegetable production would have been possible.” 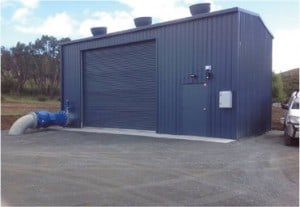 South East Stage 3 was commissioned in May 2015 and commenced operations in October 2015. The district now services agricultural, horticultural and viticultural enterprises around the townships of Tea Tree, Campania,

Orielton, Pawleena, Penna, Sorell and Forcett. Water is sourced from the River Derwent at TasWater’s water treatment plant at Bryn Estyn, and transported by TasWater via the Box Hill Head Tanks and West Derwent Main to an off­take on the western side of the river near Granton.

Delivery throughout the district is via a pipeline distribution network, with water pressurised at the Tea Tree Road Pump Station and boost pumps at Shrub End Road and Table Hill.

Hazell Bros was the head contractor for the project, and Netco Pumps were contracted for the supply of pumps and pumping equipment.

According to Mr Ellery, the decision to go ahead with Stage 3 of the scheme was due to water supply falling short of demand, and farmers being keen to pay a premium for a reliable source of water. “We only build based on demand, and in each case demand has exceeded what can be supplied.”

Working together for Tasmania

According to Mr Ellery, this irrigation scheme is just one of ten that have been built in Tasmania over the past five years. All have had the financial support from the Tasmanian and Federal Governments, as well as farmers within the area.

“We’ve put in lots of pumps and pipelines over the years and are currently working on another five schemes. It’s quite a big undertaking for a relatively small area. With the government and local farmer support, it is a public/private partnership,” said Mr Ellery.

These have been sold and serviced locally by Netco Pumps in Derwent Park.

According to Nathan Cruickshank, Manager at Netco, “The pumps at Tea Tree are ISO 150×125­315 mounted in a long coupled configuration on a common heavy­duty baseplate, complete with 132 kW CMG motors.

The Grundfos vertical multistage pumps at the other stations are close coupled in vertical configuration with common manifolds.

“A DN600 strainer is also mounted on the inlet pipework to protect the pumps from any debris that may be resident in the pipework from the construction stage, as the water is from a potable source it is not anticipated that water quality will be changing or be troublesome as far as the scheme goes.” According to Mr Ellery, the Pawleena and Forcett stations are the smaller boost pump stations that pump water up to two separate high points in the scheme where farmers require water to be delivered.

“The pump at Tea Tree is the largest, delivering 3,000ML of water over the summer period, with a delivery requirement of 16.7ML a day.

“There is also a large dam that can be used as backup storage located a few kilometres away from Tea Tree Road pump station.

“It’s somewhat like a holding dam, where if we have an issue and we can’t get water supply for a period of time, we can still use the holding dam to release water.

“The pumps are capable of putting through 28ML a day, so we can still deliver the 16.7ML to the farmers and another 11.3ML into the holding dam at the same time,” said Mr Ellery.

According to Mr Cruickshank, the pumps were of a standard type and construction, however, the biggest challenges were the large range of pump head conditions required at Tea Tree, and the endless pump duties that may be experienced depending on actual water distribution at any given time.

“The Tea Tree station was designed with two pumping solutions, one involving pressurisation of the distribution line for flows in excess of 130L/s, and the other involving a back­up holding dam if the potable supply happened to be restricted at any time.

“A solution for this application required a design that could provide for flows from 130L/s at 0 metres head, right through to 324L/s at 70 metres head,” said Mr Cruickshank.

High efficiencies were also a requirement, as each scheme had a kWh/ML target in order to give stakeholders the best value for money water. This was a difficult range of duties to meet, said Mr Cruickshank, and compromises had to be made.

A large number of pump sizes and configurations were examined before three end suction centrifugal pumps were chosen for installation at Tea Tree, the Pawleena and Forcett Stations were much more straightforward.

Together, they have the ability to provide up to 324L/s flow with a high point control that provides a minimum of 7 metres head at any given flow.

“The median range of flows expected were identified to be in the vicinity of 1,500­1,650rpm for the pump motors,” said Mr Cruickshank.

“For these particular pumps with speeds as low as 700rpm and as high as 2,150rpm, to eliminate efficiency loss, it was decided that it was better to overspeed 4 pole motors than run 2 pole motors at such low speeds.

According to Mr Ellery, coordination and cooperation with landowners before and during the construction of the scheme was critical to the successful outcome of the project.

“We held a lot of public meetings and sent out newsletters to keep people updated on how the scheme was progressing. We also engaged with landowners when completing studies along the construction footprint. These could be flora, fauna and Aboriginal heritage studies.

“For the South East Scheme, there were 150 separate landowner agreements to be made across the 84km of pipeline. That’s a lot for a single job, so we had Hazell Bros working full time to manage the landowner liaison and so did we.”

Economic boost and a bright future

Mr Ellery has said that the scheme will not only service the area with a reliable water source, but also has the potential to lead to a significant economic boost to the region.

“It’s looking like a couple of hundred jobs relating to horticulture will arise due to the increase in water availability. Also, Sorell is becoming a bit of a commuter town due to its proximity to Hobart, so there is some fantastic agricultural land which has been going under sub­division,” said Mr Ellery.

Thanks to the scheme, the future for agricultural production within the region looks more positive than ever before.

“A reliable water source for the region is now a game changer for agricultural production and farming.

“Especially during these time of significant drought, everyone is really noticing a great difference. It’s safe to say that because of the scheme, the future of Sorell is looking bright,” said Mr Ellery.