With unseasonable weather patterns, and issues around using more water than was being captured or stored, the city of Darwin was faced with a big challenge – expend on capital infrastructure to build a new 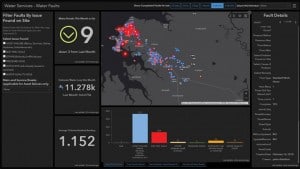 dam and potentially increase water costs for residents, or avoid this by looking to conserve and preserve as much water as possible.

Power and Water Corporation is responsible for water and sewerage services across the Northern Territory, an area of more than 1.3 million square kilometres. In the Darwin region, water resources are under greater pressure than ever before.

Through its Living Water Smart program, Power and Water Corporation has completed more than 700 residential water audits and 50 commercial and government audits. The audits showed that approximately 15 per cent of Darwin’s water consumption was the result of leaks.

To specifically target this water waste in a cost-effective way, Power and Water Corporation designed the Community Leak Program to reduce leaks in the region whilst increasing community awareness of the water and money wasted.

Power and Water Corporation saw that water lost through leakage was a major contributor to water wastage.

To tackle the problem, the corporation first needed to identify where the leaks were.

This involved updating its infrastructure and maintenance information to provide operational and asset management teams with the data needed to make informed decisions regarding its maintenance program.

At the heart of this update was the checking of around 30,000 residential water meters for signs of leaks.

To undertake this task effectively, Power and Water Corporation needed a mobile, reliable and user-friendly data collection system that would allow its team of leak checkers and 18 different plumbing companies to receive and capture data out in the field.

It also needed to be able to integrate this information back into its existing corporate systems for further analysis.

“Initially we found one in every eight homes had a leak. So far, we’ve fixed 3000 of them, saving more than one billion litres of leaking water per year,” Power and Water Corporation’s Water Efficiency Project Manager for the Living Water Smart program, Tori Hampton, said.

Central to Power and Water Corporation’s solution were two user-friendly, mobile mapping applications that plumbers and the corporation’s own leak checkers used to record relevant data accurately in the field and upload it to an operations centre in real time.

With each group using their own purpose-built survey app, leak checkers recorded the locations and volumes of leaks, while plumbers subsequently recorded the leak repair and confirmed the volume.

Additionally, should there be any future incidents, asset data can now be instantly accessed, enabling many issues to be resolved from the office instead of sending another contractor to the site.

The apps have also empowered the plumbing sector to carry out Power and Water Corporation’s sustainability objective of saving water through fixing leaks.

Simply using the app has built awareness in the industry about leak identification and repair, thereby extending the longevity of the program.

It is hoped that leak checks will become ‘business as usual’ for the Darwin plumbing sector and residents, as they now understand the sheer volume of water that is wasted and subsequent water costs that result.

“The app will also be extended to existing and future programs – such as field auditing on vital power and water assets – which will dramatically reduce data handling,” Ms Hampton said. The award-winning Living Water Smart program used highly successful mobility applications that were the first of their kind in Australia.

The apps were recognised and highlighted as a key innovation at the industry-leading OzWater conference, and have been roundly praised by government, utility and plumbing sector stakeholders.

By replacing old technology infrastructure, surveying and monitoring processes, the apps revolutionised data collection for Power and Water Corporation by allowing field workers to enter information directly into the system in real time.

The data has also provided Power and Water Corporation’s operational and asset management teams with vital technology infrastructure and maintenance information that now informs decision-making across the board.

This groundbreaking innovation has been recognised on a global scale, with Power and Water Corporation being awarded the prestigious Special Achievement in GIS award (SAG) by founder of Esri, Jack Dangermond.

“By using this software, we saved the cost of two full-time administration resources and an external consultant: around $200,000,” Ms Hampton said.

The solution has been a central contributor to Power and Water Corporation’s efforts to improve Darwin’s sustainable water future and deliver financial savings for its customers and the community at large. Key outcomes include:

This partner content is brought to you by GIS. For more information, visit www.esriaustralia.com.au/savewater