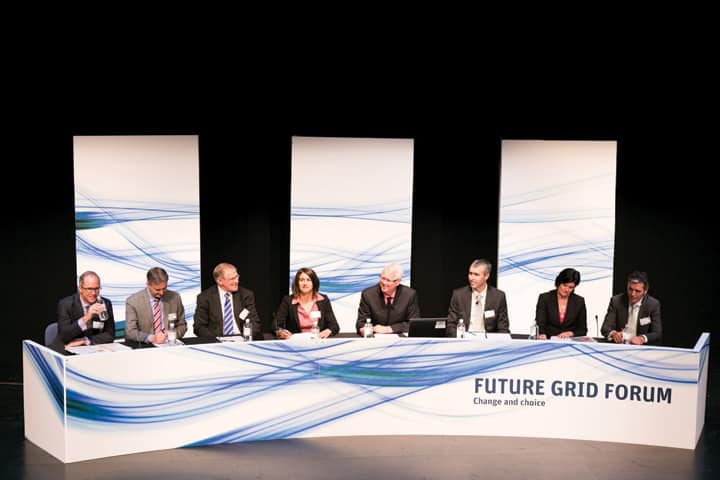 Historically high retail electricity prices, widespread deployment of solar panels, and declining aggregate peak demand and consumption in most states have changed projections of how the electricity sector may develop in the future. To take a fresh look at the possibilities and their implications, the Future Grid Forum has been working for 18 months to develop plausible alternative scenarios, review their associated risks and challenges and determine the options for responding.

The Future Grid Forum was convened and facilitated by CSIRO, commencing in August 2012. The project brought together 120 representatives from across industry, government and community groups. The process emphasised the need to analyse the system as a whole, rather than just in individual parts. The projects final report is titled Change and Choice: The Future Grid Forum’s analysis of Australia’s potential electricity pathways to 2050.

In developing the scenarios the Forum chose to explore “megashifts” – events that fundamentally change the electricity business model either suddenly or incrementally over time. The main sources of megashifts were proposed to be low cost electricity storage, sustained low demand for centrally-supplied electricity, and the need for significant greenhouse gas abatement.

Consumer choices were also considered as a key catalyst for change and may include adoption of potential new business models, openness to alternative tariff arrangements, and a higher overall level of engagement by consumers with their electricity use. 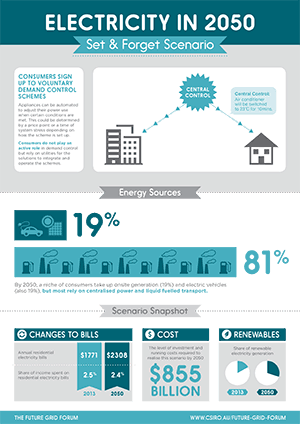 Rise of the prosumer 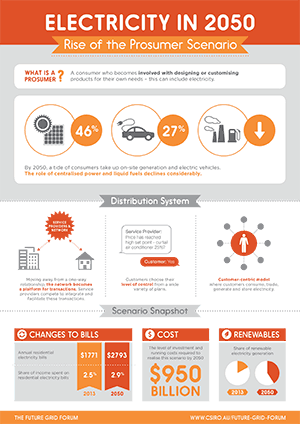 Continued falling costs of solar rooftop panels and other on-site generation technologies, sustained high retail prices, and increasingly innovative financing and product packaging from energy services companies leads to the widespread adoption of on-site generation with almost half of generation on-site. Residential consumers in particular are empowered by their choice to become more actively engaged in their electricity supply and call themselves ’prosumers’. 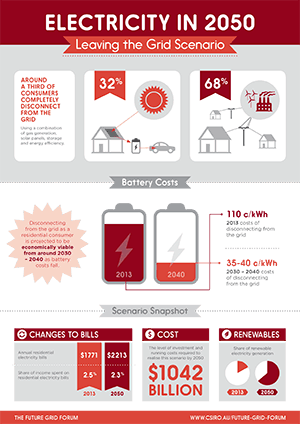 The continued dominance of volume-based pricing among residential and small commercial consumers encourages energy efficiency without accompanying reductions in peak demand growth. The subsequent declining network utilisation feeds increases in retail prices. New energy service companies sensing a market opportunity invite consumers to leave the grid, offering an initially higher-cost solution, but one that appeals to a sense of independence from the grid. By the late 2030s, with reduced storage costs, disconnection becomes a mainstream option with a third of consumption eventually being removed from the grid. 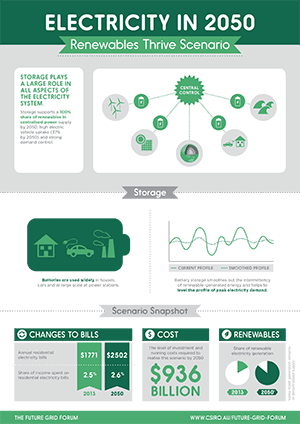 Confidence in the improving costs of renewable and storage technologies, achieved by combined efforts from government and industry around the world, results in the introduction of a linearly phased 100 per cent renewable target by 2050 for centralised electricity generation. Some customers maintain fossil based on-site power so that overall, the renewable share, taken as a share of both centralised and on-site generation, is 86 per cent by 2050.

The Future Grid Forum recognised that in reality the future will likely incorporate combinations of these scenarios and also be impacted by other factors not considered. However, these scenarios were useful to be able to explore some specific challenges.

In Set and forget, Rise of the Prosumer and Renewables thrive, distribution network utilisation initially improves because peak demand growth is being limited while consumption is growing (underlying consumption growth is consistent with AEMO’s 2013 projections). However, from the 2020s, the utilisation rate begins to decline as a result of the uptake of on-site generation, which decreases the amount of consumption that needs to be supplied by the grid.

The incidence of declining network utilisation begins earliest and the rate is strongest in Rise of the Prosumer and Renewables Thrive because they have stronger uptake of on-site generation.

Leaving the grid does not include any peak demand reduction measures and this is the major reason for the projected lower utilisation from 2015 through to 2035. After 2035, when customer disconnection is at its strongest, the loss of these customers temporarily improves utilisation because those leaving the grid tend to be smaller residential and commercial consumers who have a higher contribution to peak demand. However, as the level of disconnection stabilises, the declining trend reasserts itself.