GIS the future of asset management 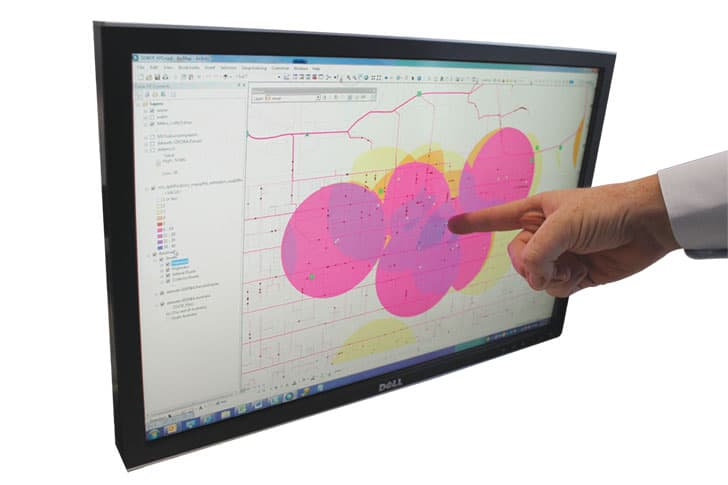 Since its development began almost 30 years ago, SA Water has developed its geographic information system (GIS) into a robust network that is used for a wide variety of applications. Last year we spoke to the organisation about the development of their system; and recently, Senior Asset Information Analyst John Bormann spoke to us about how SA Water staff interact with the GIS, and its important place in the future of utility asset management.

The GIS is integral to the functioning of SA Water, and is used in many different ways across the organisation. There are different levels of users, ranging from basic viewing and printing to complex spatial analysis and editing. Systems administration is another important function the GIS provides.

“I have been using SA Water’s GIS since 2002,” said Senior Information Analyst John Bormann. “I started in the GIS Management team within the Information Services department, undertaking systems administration work, supporting other users, and performing tasks and analysis too difficult for regular or light GIS users. The great thing about starting there was I had a small amount of project support work, where I had problems of my own to work on, but supporting the rest of the corporation’s near-100 full desktop GIS users and 2,000 web based GIS users (both internal and external to the corporation) gave me exposure to a broad range of utility GIS related work.

“In 2009 I moved into the Asset Management team, which is the primary support area for corporate usage of the GIS. This means I still get to do an extremely broad spectrum of GIS work, but without the systems administration aspects.”

The GIS has a vast functionality, and can be used for many different applications. Mr Bormann has used the GIS to assist SA Water staff on a wide range of projects, which include:

The future of asset management?

The GIS is particularly essential when it comes to managing assets, as it allows data to be quickly accessed, edited, and analysed.

“I can barely fathom how we would operate in the long term without a GIS,” said Mr Bormann.

“At SA Water the GIS is the pipe asset register, so the system is used in conjunction with failure (works management) data within sophisticated statistical models to develop failure curves on top of being used to fuel Key Performance Indicators to prioritise action on shut-off blocks for water mains. 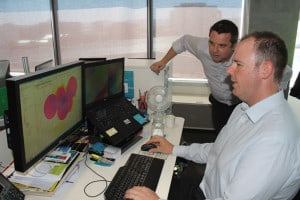 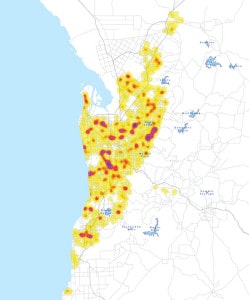 SCREEN SHOT SHOWS HOTSPOTS FROM THE PAST THREE OR FOUR YEARS OF CHOKES AND OVERFLOWS IN THE SA WATER NETWORK, CAUSED SPECIFICALLY BY FAT BUILD-UP.

“The GIS is also used to maintain the sewer mains cleaning program and score the performance of pipes to increase or reduce cleaning regimes. In SA Water’s Land Management area, mobile GIS is used to accurately map issues that contain vegetation, to pass on to contractors.”

According to Mr Bormann, the asset management team have seen a variety of benefits since they began using the GIS, most particularly the creation of a robust water mains replacement program, the ability to proactively manage the sewer mains cleaning program, and an automated valuation process.

Though SA Water’s GIS is one of the most advanced and extensive in the Australian utility sector, new initiatives are constantly under consideration to further evolve its effectiveness and range of functionality.

“We have a project to implement a unified mobility solution, but the first version doesn’t include GIS. Future revisions will include a GIS component so workers don’t need to travel back to a depot to use the web mapping system to generate a shutdown, repair or recharge plan. This solution will also allow workers to accurately position the point of failure, improving the quality of analysis using this data (sewer mains cleaning program, water mains replacement/rehabilitation program).

“I would also like to see automated lodgement of as-constructed plans into our GIS to speed up appearance of infrastructure on Dial Before You Dig requests and improve the quality of the data coming in to the system by increasing QA checks of data entering the system. A project to provide the functionality is already underway.

“Longer term, we would like to have survey accurate data and couple this with a mobility solution that includes an augmented reality component to ‘x-ray’ our subsurface infrastructure. Given our data’s placement relative to land parcel boundaries and capture methods dating back to 1986, there is little we can do in the short term to achieve this.”

SA Water also intends to develop the GIS to allow for live updates from the field.

“In the future we would like field operators to be able to change attributes like whether a valve is opened or closed or those that require a QA workflow to be triggered. It would also be useful to capture missing assets like fire plugs, isolating valves and maintenance holes, but with these additions going to a staging area, rather than performing the edit on the live production data.”

Not just for the experts

Despite its intimidating range of functionality, the GIS is very user-friendly. SA Water’s internet GIS is called the ‘AquaMap’, and users can access its data through the Geocortex Silverlight web viewer. ArcGIS Desktop is a more complicated software platform, used primarily by editors, asset managers, and other high-end users. Employees who need to use the GIS for more complex activities have access to a multitude of training and education options.

“Our web mapping system, Geocortex, which runs alongside ArcGIS for Server, is fairly simple and requires little to no training to use. Regular training sessions are held by Asset Management during the year if people want to attend.

“Use of ArcGIS Desktop is carried out by people already trained, or they attend an ESRI course, or they’re assisted through a self-learning phase conducted by Asset Management. The tools aren’t as complicated as they used to be, the real learning curve is understanding the data.”

Perhaps the most useful aspect of the GIS is its ability to allow asset managers like Mr Bormann to proactively assess and circumvent potential problems across SA Water’s vast network of assets. Particular procedures have been built into the system to ensure that assets are regularly and appropriately assessed.

“If a shut off block has three or more unplanned outages within a rolling 12 months, it triggers a KPI that elevates its assessment on SA Water’s mains replacement program. Sewer events similarly trigger entry to the CCTV program and/or cleaning program with varying levels of cleaning types and frequency.”

This proactive and responsive system helps asset managers in the forward planning of their asset requirements.

“In more purely proactive terms, SA Water maintains two complementary models for water mains replacement – NESSIE and PARMS. PARMS is a Water Services Association of Australia (WSAA) initiative, carried out by the CSIRO and since maintained by WISER Analysis. These models, especially PARMS, take in GIS and failure data and help form the forecasting and replacement program.”

The continued success of the GIS is dependent on it being continuously updated to reflect changes in the system. Certain safeguards have been built into the system to ensure the integrity of the data it provides.

“Within the web mapping system there is a option to immediately notify the GIS edit team (within Asset Management) of a required correction, e.g. missing information, updated valve status. As for new infrastructure, part of the asset handover process is received by the GIS edit team of as-constructed data. Without it, the contractor cannot receive final payment.”

The benefits of GIS for utilities

Given its huge functionality, user-friendliness, and potential for further development, the GIS represents a powerful opportunity for the modern utility. For Mr Bormann, the biggest benefits are the ability to easily update plans and maps with new data and the ease of assessing and valuing underground assets.

“I don’t understand how a utility, at least, a large utility could operate today without a GIS. Without it, we’d still be updating hard copy plans, we wouldn’t have as accurate a picture of asset performance and asset valuation would be far less accurate. Given that the vast majority of our assets are underground, I don’t see how we could survive without it in the long term. I think we could survive for a short time, based on operator knowledge and hard copy plans, but performance would be severely impacted.” 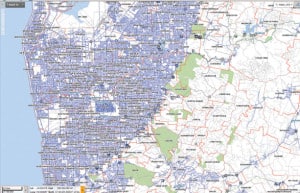 Benefits flow through to contractors

SA Water’s GIS is also utilised by external parties, who can access a condensed version of the web mapping environment.

“They receive a guide on how to use it and can contact our Customer Service Centre, which then relays the request to us, if someone needs assistance. We receive very few calls, as there are only a couple of hundred external users.”

“Benefits include a reduction in Dial Before You Dig requests and other infrastructure queries that may have come through our Customer Service Centre,” he said.