As the south west corner of Western Australia continues to have hotter summers and low rainfall, Water Corporation is seeking new ways to secure climate-resilient water sources. The utility has embarked on an expansion of its $262 million Groundwater Replenishment Scheme — the first full-scale scheme in Australia — which will see 28 billion litres of water per year pumped back into Perth’s aquifers for reuse.

The process of groundwater replenishment is an innovative concept that involves treated wastewater being further treated so that it’s good enough to drink, before being recharged into groundwater supplies. This water is then stored or ‘banked’ in the aquifers, and taken out later for further treatment and supplied to a drinking water system.

As the process doesn’t rely on rainfall and has the potential to recycle large volumes of water, it is sustainable and drought-proof. 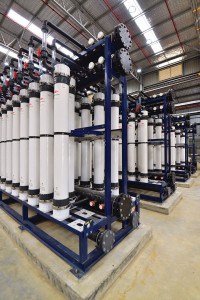 Inside the Advanced Water Recycling Plant.

For this reason, Water Corporation has prioritised groundwater replenishment in its Water Forever plan – a long-term plan to further secure water supplies in response to climate change and an increasing population.

The Water Forever plan is based on a three-pronged approach: working with the community to reduce water use, increasing the amount of water recycled, and developing new water sources.

A Water Corporation spokesperson said the Groundwater Replenishment Scheme, taking place at the Beenyup Advanced Water Recycling Plant in Craigie, ticks two of these boxes as it increases water recycling and is developing a new source.

By 2060, groundwater replenishment could provide up to 20 per cent of Perth’s water supply.

For the water to be recycled for reuse, wastewater is first rigorously treated at the Beenyup Wastewater Treatment Plant. It then undergoes further treatment at the on-site Advanced Water Recycling Plant where all trace levels of microorganisms and chemicals are removed so that it meets drinking water standards.

To achieve this, it is processed through three water treatment methods:

Once water has passed through the three stages, it is of drinking water quality and is recharged into the aquifer where it mixes with the existing groundwater.

The water will remain in the aquifer before it is drawn out at another location, treated at a groundwater treatment plant and added to the water supply scheme.

Over time, the difference between the recycled water and existing groundwater is indistinguishable.

A work in progress

Stage one of the Groundwater Replenishment Scheme was completed and began operation last year, and has the capacity to recharge up to 14 billion litres of water into Perth’s groundwater supply each year.

Work on the stage two expansion of the scheme is underway, which will double the capacity to 28 billion litres of water per year.

Stage two includes the duplication of the 14 billion litre Advanced Water Recycling Plant, and the construction of a 13km recharge pipeline extending to the north-east of the plant, connecting the plant in Craigie to the two new off-site recharge bore sites in Wanneroo and Neerabup.

The location of the new Advanced Water Recycling Plant has meant careful planning and delivery continues to be important.

The site is located in the Perth suburb of Craigie, on Water Corporation-owned land that houses the original Advanced Water Recycling Plant and associated infrastructure from stage one of the Groundwater Replenishment Scheme. This stage continues to recharge water while stage two is under construction.

The proposed route for the pipeline was selected with a number of considerations in mind, including impacts to the community, environment, safety (of people constructing and maintaining the pipeline), constructability and cost.

At each recharge site, Water Corporation will be installing a total of four bores, including two recharge bores and two monitoring bores. Work to install these bores will involve drilling and construction of above-ground infrastructure. The work will be delivered in stages.

Work to install the bores at both the Wanneroo and Neerabup sites has begun and is expected to finish later this year. Work on the associated above-ground infrastructure will begin after the bores are completed and are expected to be completed early next year.

When complete in 2019, the scheme will have the capacity to recycle enough water to supply up to 100,000 households per year, providing Perth with a new climate independent water source to boost much needed drinking water supplies.