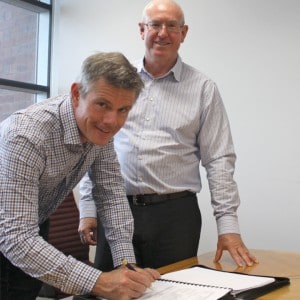 The 280km Gunbar Water Pipeline is a major component of this project and MI Asset Delivery Manager, Jody Rudd, said he was looking forward to working with Comdain to deliver it.

“Comdain have already done a significant amount of work in relation to the design of the Gunbar Water Pipeline,” Mr Rudd said.

“This is a unique project for us due to its complexity and scale and we are confident that Comdain will deliver this component safely, to a high quality and on time.”

The WWSD will benefit Wah Wah customers through improved levels of service, with year round access to river and bores, pressurised water supply and measured water use, which can be remotely monitored.

MI CEO, Brett Jones, said it wasn’t just Wah Wah customers who would be supported by the project, but all customers will benefit from operating and maintenance savings, lower future refurbishment costs and conveyance water savings, once the project is complete.

“To grow as a company we need to continue to increase efficiency and eliminate waste,” Mr Jones said.

The Wah Wah Stock and Domestic Pipeline Project is due to be completed by April 2018.