Guy Chalkley: transforming a utility against a backdrop of industry change Guy Chalkley was appointed Chief Executive Officer of Western Power in August 2016, after acting in the role from March in that same year. As Guy marks his official 12-month anniversary in the top job, we sat down to talk with him about the changing energy industry, integrating renewables into the network and embracing change as an opportunity – not a threat.

Mr Chalkley came to Western Power with a varied career history. Having trained as an accountant in the 1980s, he worked in a range of industries in countries such as Nigeria, Poland, Russia, Hong Kong, Brazil, Mexico and Nicaragua; had brokerage stints in New York and a sugar refinery in Queensland; and worked in the airport sector in Shanghai, Mauritius and Naples.

It was after this experience that he made the move to utilities, joining Veolia Water. Mr Chalkley finished his stint there in the role of Finance and Regulation Director, during a period in which the business changed hands four times in ten years. 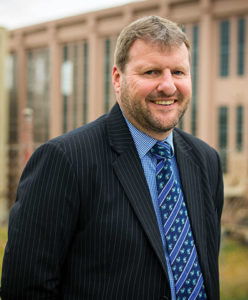 Five years ago, Mr Chalkley made the move out west, and transitioned from a finance role at Western Power into the CEO role last year.

Coincidentally, Mr Chalkley’s first 12 months as CEO have come at the same time as some major transition points for both Western Power, and the energy industry more broadly.

For Western Power, in June last year it looked as if the organisation would shift from being regulated by the state Economic Regulation Authority, to the national regulator, the Australian Energy Regulator.

Against the backdrop of this change, in Mr Chalkley’s first weeks in the role of CEO, the organisation announced a major transformation program, designed to help Western Power provide its customers with safe and reliable power in a more efficient manner.

“This transformation program had a strong focus on positioning the business to respond to an economic downturn, understanding that it would have a major impact on our people,” said Mr Chalkley.

“We announced the potential people impact in my first week in the role, as it was important to be open, honest and transparent through the journey. We knew we would only be successful with everybody on board.

“While we made mistakes, I believe the openness and honesty of our approach to change allowed us to move forward together at a very fast pace.”

The amount of change we’re currently seeing in the energy industry more broadly has also had its implications for Western Power. New technologies – including renewable energy sources and battery storage – are naturally having an impact on the way Western Power approaches is long-term planning activities.

“A 50-year plan was fine in an era where the investment solution was the same, but this cannot be said now.

“The challenge for all of us is to move away from the belief that the wood pole we put in the ground today will still be the only solution in 50 years’ time. The rapid march of technology in the energy industry will constantly refine the 50-year outlook, especially in the shorter term.

“It will be vital to have information and be flexible to meet the challenges of the next ten years, while not overlooking the immediate needs of the next two to five years.”

According to Mr Chalkley, Western Power’s new business intelligence and data analytics team will play an important role in meeting these future challenges.

Western Power has also created a change and innovation business unit, with the Executive Manager forming part of the leadership team. Bedding down the way these teams interact with the entire business – especially the emerging technology unit within asset management – will be of critical importance.

“The combination of these functions will allow us to pilot and test new ideas and customer-focused asset solutions based on emerging trends and patterns now, rather than in five or ten years’ time.” For Western Power, as a traditional network with both transmission and distribution functions, and with high solar PV penetration on one side and substantial renewables projects on the other, the broader shift in the traditional energy chain of generation, distribution and retail is being keenly felt.

“The advent of battery storage on one side, as well as smart meters and Big Data on the other, is also providing a challenging environment for distributors. Add to this grid defection from solar PVs and large-scale renewables, and you have a real melting pot.”

For Mr Chalkley, it’s been important that Western Power recognises this evolution as an opportunity, rather than a threat.

“The challenges we’re facing can be overcome with changes to current legislation and regulation, which haven’t kept pace with industry changes,” said Mr Chalkley. “We are also in a strong position as a trusted provider to test and pilot the new technologies that have emerged.

“This will counter the revenue decline as solar PV continues to grow.”

Mr Chalkley also believes that the disruption being seen in the industry, in the form of new technologies, will significantly challenge the business to consider the best investments when it comes to new asset planning.

“I believe that the disruption has added another step, very early in the planning stage, that challenges whether the traditional form of investment will be the best solution.

“Our traditional network assets and solutions have long lifecycles and long payback periods – but new, emerging technologies could make these assets obsolete over a short period of time.

“We do not have all the answers yet, but we remain committed to safety and reliability, whilst we wait for a fuller view of impact of disruption or alternative investment solutions.”

Getting the renewable connection right

For Western Power to sufficiently take advantage of the opportunities renewables provide – rather than be threatened by them – Mr Chalkley firmly believes the utility needs to take the right approach to integrating renewables into their network.

“Renewables need to be connected in the right places and with the right level of investment in the network to enable their efficient use,” said Mr Chalkley.

“The current network wasn’t designed for renewables, or the two-way flow of electricity for that matter. We do need a good forward picture and plan of what and where future renewables are likely to be located, so we can prepare the network for the changes that will take place.

“This needs to be done at a high level so that we are not simply adding piecemeal, point solutions. A longer-term view has to be taken that secures the network for future generations utilising a mixture of renewables and traditional generation.”

One of the key points to consider is the fact that there is a wide variety of emerging technologies out there, that can be considered for implementation into the network. As Mr Chalkley says, there is no one “silver bullet” solution to meet the brief of providing energy that is reliable, affordable and clean.

“All of the new solutions provide customers with alternative options that can be better than existing options,” noted Mr Chalkley. “And ultimately, this can only be good for the customer. From a network position, the customer’s particular set of circumstances has to be considered to deliver the most efficient solution possible, to meet their needs for safe and reliable energy.”

To that end, Western Power is moving forward with a number of projects that incorporate innovative technologies that answer customer needs.

“We are piloting a large-scale microgrid in an edge-of-grid eco-tourist town, a battery storage system in a remote town that suffers above average outages, and a stand-alone power system in a farming community with below average reliability,” said Mr Chalkley.

“Along with these physical projects, demand management tools are helping shape customer behaviours, which is proving to be a smarter investment than the traditional sub-station build in urbanised areas.

“These are four of many options that we will continue to pursue in the future. As an organisation, we need to work now to be more prepared for higher levels of PV and batteries on customer premises, as well as technologies such as ‘peer-to-peer’ trading.

“Western Australia has very good sun, wind and wave resources, with global technological partners queuing up to partner and test their projects in an environment that can provide an available site. The fact that land is available and the population is sparse has become an advantage.

“Add to this our committed people who have always got things done and delivered, often in adversity, and you have an excellent mix for the future.”

The focus on integrating solutions into the network that offer the best benefits to customers is a sentiment echoed in other areas of the business, particularly when it comes to affordability.

The transformation program that Western Power embarked on at the beginning of Mr Chalkley’s tenure is already delivering significant savings in terms of efficiency gains, and importantly, safety and reliability has not diminished.

“We also want to improve the process for access and with new technologies, better communication and by taking the time to listen, we believe the customer experience has improved and will continue to improve.

“One of the things that you realise quickly, as a monopoly, is that we have responsibilities. We are embedded in the community, our employees are also customers and we all reside in the community. Fundamentally the customer has little choice but to use us in some form.

“It is important that we treat people with respect and act with integrity, this involves actively listening to and engaging with our customers and the community to identify and implement innovative solutions that take their input into consideration.

“We aim to engage with the community early and proactively to address social impacts. We engage across a broad platform of stakeholders and community members, from people who are potentially impacted by new or existing infrastructure – through to our regionally based community investment program that aims to make a meaningful contribution to our communities.”