South East Water is using Advanced BlokAid® in its sewers to monitor sewer levels, derive flow rates and detect the presence of hydrogen sulfide (H2S) gases. This Internet of Things (IoT) device, is helping the organisation detect and fix blockages before they potentially cause a spill to the environment. South East Water manages more than 10,000km of sewer pipeline and almost 200,000 maintenance structures across its network in Melbourne’s south east. 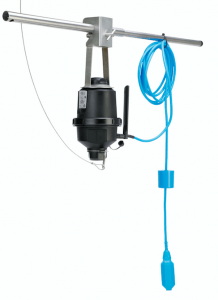 The water organisation’s service region includes more than 270km of pristine coastline and beautiful beaches. That’s why it’s important for the utility to protect its environment and maintain the liveability of its region.

South East Water‘s Beach Guard project, implemented on the Mornington Peninsula, helps to protect beaches from potential wastewater pollution, to make sure the community can continue to enjoy the Peninsula’s sandy shores.

The key to Beach Guard’s success is Advanced BlokAid®. Developed by South East Water and manufactured locally in Melbourne, Advanced BlokAid®is an advanced IoT-enabled device installed at the top of high-risk manholes to identify sewer blockages before they become a spill.

The device is easily installed in sewer manholes to monitor sewer levels, derive flow rates and detect H2S gases – all in near real time. Recent independent lab testing of Advanced BlokAid® found the solution runs at an accuracy of +/- 5 mm for flow level in a DN150 pipe with 40mm flow depth up to a range of 3m.

The project is part of South East Water’s transition to becoming more predictive about potential problems, enabling it to fix problems before they become an issue for customers.

South East Water’s Managing Director, Terri Benson, said, “As part of our journey to becoming a digital utility, we’re making the shift from reacting to problems to being able to predict problems before they impact our customers or the environment. Solutions like Advanced BlokAid® are playing a big role in that shift.

“Thanks to Advanced BlokAid®, we’re now reporting on the number of spills avoided, which is a first for our organisation.”

The Beach Guard project started as a trial in 2018, with a particular focus on the Mornington Peninsula after finding that the region contributed to around 20 per cent of all sewer blockages in South East Water’s network.

South East Water was able to detect a partial blockage in its network just a few weeks after the first deployment of the Advanced BlokAid® devices. The operations team were alerted to and able to clear the partial blockage before it became a larger issue or caused a sewage spill to a popular nearby beach.

South East Water’s General Manager Customer Service Delivery, Terry Schubach, said, “Since deploying the Advanced BlokAid® devices to the Mornington Peninsula, we’ve been able to detect and subsequently clear a number of blockages which could have resulted in spills to the environment.

“Cleaning up from the average dry-weather spill can cost our organisation around $20,000 or more, depending on complexity. So having this solution available to us provides improved visibility of our network where it is deployed, which in turn provides a better experience to our customers, protects our environment and helps us to save on costs.”

The data collected by the Advanced BlokAid® devices also helps inform South East Water’s proactive sewer cleaning and maintenance program, as its operators now have increased visibility on which sewers are due for maintenance. This proactive maintenance regime helps to reduce spills and long-term maintenance costs.

Other utilities across Australia and New Zealand are now realising the benefits of Advanced BlokAid®. The solution is available through Iota, the commercialisation arm of South East Water.

This partner content is brought to you by Iota. Learn more about Advanced BlokAid® and how other utilities are now using the solution to protect their sewers here.