Starting the International Year of the Reef, the Prime Minister of Fiji, Frank Bainimarama, announced the nomination of large portions of Fiji’s Great Sea Reef as a Ramsar site in an effort to protect it from threats such as chemical and wastewater runoff from neighbouring urban settlement and industry.

A Ramsar site is designated under international treaty as a wetland important for the conservation of global biological diversity and for sustaining human life. Under the convention, wetlands are broadly defined and include areas such as coral reefs.

“We are engaged in a battle for the future of these reefs. We approved the nomination of large parts of the Great Sea Reef as a Ramsar site to protect it for future generations,” Mr Bainimarama said.

“Today I appeal to every single person on earth to help us. We must replace the present culture of abuse with a culture of care.”*

Fiji’s Prime Minister is certainly one who understands the threat, with Fiji being made up of an archipelago of more than 330 tropical islands surrounded by coral reefs.

But “winning the battle” for the future of the reefs is not quite so simple. It has been widely known for some time that whilst healthy coral reefs can exist over a wide range of natural nutrient environments, the heat and light stress tolerance of corals, and thus their bleaching susceptibility and recovery after bleaching events, is adversely affected by high dissolved inorganic nutrient loads.
Higher than normal inorganic nutrient loads disrupt the finely balanced environmental conditions necessary for coral to thrive via multiple pathways.

Increased phytoplankton loads can supply more food for the larvae of the crown of thorns starfish, limit light penetration and cause an abundance of filter feeders, whilst high algal growth, fuelled by the unnatural abundance of inorganic nutrients, out compete and smother both live and bleached coral, release algal toxins and deplete oxygen, inhibiting growth and recovery.

In a naturally nutrient balanced environment, the heat and stress tolerance in the first instance and the recovery speed after bleaching events of coral reefs is likely sufficient to withstand the globally predicted higher water temperatures, however, when combined with the higher inorganic nutrient loads we are imposing on the coral reefs, it is rapidly becoming apparent that their survival is unlikely.

Inorganic nutrients make their way into the coral reefs from a wide variety of sources, including fertiliser usage, deforestation, land use for grazing, urban stormwater pollution and lack of sewage treatment or poor nutrient removal in sewage treatment plants.

Even mobilisation of sediments via trawling and dredging increases the levels of nutrients.

Making matters worse, nutrient stress on coral reefs often occurs a considerable distance from the source via the movement of the increased phytoplankton loads. 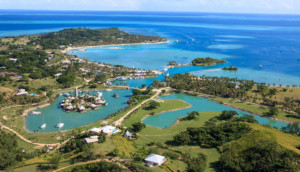 Hydroflux Pacific is helping Fiji with its battle to protect coral reefs by bringing advanced, global, technology and the necessary local support to island resorts.

Hydroflux Pacific, Hydroflux’s latest addition to its environmental group and located in the heart of Suva Fiji, knows only too well the challenge ahead.

Hydroflux Pacific has already started helping Fiji with the battle for the future of the reefs. Bringing advanced global technology to the islands along with the necessary local support, Hydroflux Pacific is already helping Fiji treat the wastewater from both industry and resorts, all of which potentially makes its way into the coral reef oceans.

The Hydroflux Group already has a number of major projects underway in the region. This includes the provision of an advanced wastewater treatment plant at the multi-award winning Musket Cove Island Resort, located in the remote Malolo Lailai, and several more packaged sewage treatment plants under construction for other major resorts in Liku Liku, Malolo and Matamanoa in the Fijian Mamanuca group of islands.

Hydrofluxs’ range of advanced packaged sewage treatment solutions treat wastewater generated by guests, in addition to that from the laundry and the kitchens, to a standard suitable for reuse in irrigation, thus ensuring the environmental sustainability of the resort and helping protect the fragile neighbouring coral reefs into the future.

Hydroflux Pacific fully supports the Prime Minister of Fiji, Frank Bainimarama and his appeal to every single person on earth to help save the coral reefs of the world.

This partner content is brought to you by Hydroflux. For more information, visit hydroflux.com.au.