The oil and gas industry has celebrated the career achievements of politician Ian Macfarlane after he announced his resignation from parliament at the next election. 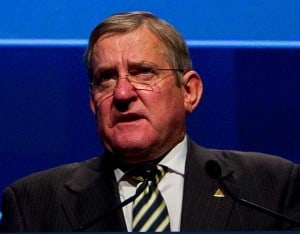 The Australian Petroleum Production and Exploration Association (APPEA) Chairman, Bruce Lake, wished Mr Macfarlane well for the next phase of his career.

“Since 2001, Mr Macfarlane has been a tireless, passionate champion of the resources sector in general and the gas industry in particular.

“He leaves office with an impressive record of achievement and universal respect.

Mr Macfarlane entered Parliament in 1998 and was Australia’s longest-serving Minister for Resources.

From November 2001 until September 2015, with one brief interval, he served as the Coalition’s Minister or Shadow Minister in the industry, resources and energy portfolio.

“With Australia poised to become the world’s leading LNG exporter, Ian can be proud of his pivotal role in developing this world-class industry.”

Mr Lake said Mr Macfarlane has been an effective advocate for policies that have seen the oil and gas industry invest hundreds of billions of dollars and bring Australia’s largest-ever resource projects to fruition.

“The industry thanks Ian for his unstinting support. Given his knowledge, experience and practical approach, Ian still has much to contribute. APPEA wishes him well in his life and his career after politics,” Mr Lake said.