It is often the simplest ideas which create the best outcomes – and so it was with Sydney Water’s Andrzej Krawiec and Martin Byrnes’ simple modification of sewage pump operating protocols, which is now saving Sydney Water around $6 million in operational costs each year.

The idea was seeded in 2011 following a safety incident that occurred during the manual cleaning of a sewer pump station wet well.

Andrzej Krawiec, Service Delivery Officer at Sydney Water said “The safety incident triggered me to think that there must be a better way. Why do we continue to clean wet wells in this manual and dangerous way? Surely we can come up with some way to automate this process.”

Mr Krawiec sought the guidance of Martin Byrnes, SCADA Configuration and Test Engineer at Sydney Water and together they created an innovative solution to the problem, which reaped far greater benefits than they initially imagined.

At sewage pump stations, grease, fat and other material such as wet wipes combine on the well surface over time and can form a significant crust. Heavy silt builds up on the well floor.

Combined, these factors cause significant odour and many operational and maintenance problems, such as:

Issues with this manual cleaning process, known as flushing, include:

As materials become consolidated over time they choke pumps, which to remedy, requires the expensive process of lifting the pump out of the well to clean and restore the pump to operation, involving crane hire and multiple people on site.

Each sewage pump station required on average five to six manual flushes per year, plus two de-­siltings per year, with each manual clean requiring flow isolation of the system.

The combined cost of manual cleaning was around $2 million per year for Sydney Water.

“I thought that if we could just get the material to go through the pumps one small piece at a time, rather than allowing it to consolidate, then we would have much less of a choking problem”, said Mr Krawiec.

The traditional setup for operating levels and pump cut­in and cut­out, ensures the well surface stays above the pump body and definitely above the pump intake.

The well surface is not disturbed during the pump down which causes crusting on the surface and silt build up on the well floor.

The process involved automatically pumping the wet well down to a very low level so that it draws the floating material into the pump intake and removes it on a daily basis.

Also the bottom silt gets swept up by the turbulence and is drawn into the pump intake. Sydney Water uses its SCADA system IICATS to control level changes which can be scheduled for any time of day or night.

The process is undertaken at peak inflow times for additional turbulence, which creates more effective cleaning.

For some particularly problematic sites this Auto Flush period is repeated in the evening peak, or more often if necessary to keep the well clean.

In cases of heavy crusting, a manual clean may be necessary prior to commencing Auto Flush. In other cases where level instruments are so encrusted with fat, a manual clean and re­calibration is necessary to get an accurate reading at low levels so that Auto Flush can be effectively implemented.

In both situations manual cleaning was not required after Auto Flush was implemented.

Sydney Water initially ran the Auto Flush concept as a trial of 18 sites, for which the worst sewer pump stations were chosen.

Some of these trial sites had experienced persistent odour complaints and were ideal candidates to determine if the Auto Flush process would be effective.

Once initially implemented, most other costs gradually declined because of less instrument failures, less pump chokes and less pump breakdowns.

The trial was so successful that Sydney Water rolled out the protocol to 485 sewage pumping stations. 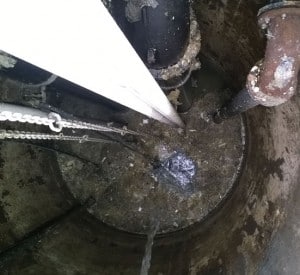 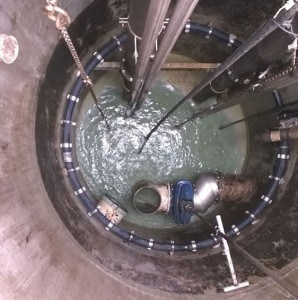 After Auto Flush the surface remains liquid and free of solid crust four weeks after implementation.

Since undertaking the trial, Sydney Water has experienced a number of benefits.

The success of the Auto Flush protocol has created a culture where the wider group of Sydney Water engineers is now looking for other ways to innovate to improve operations. Success breeds success.

Gary Hurley, Sydney Water’s Networks Manager said “Sydney Water is proud to have innovative people such as Andrzej and Martin working to improve the way we do our work.

“The Auto Flush innovation has the potential to be implemented by the water industry across the globe.”