Security lighting is a well-established method of deterring theft and vandalism at utility assets and other high-value sites. While lighting alone won’t stop a determined intruder, a well-lit site can discourage those who would hide under the cover of darkness, assist video surveillance operators by improving visual assessment abilities and provide better visibility for on-site workers.

Making lighting “intelligent” by adding embedded sensors and/or other intelligence features, not only makes it a more effective deterrent, but can also allow it to actively detect and respond to intrusion attempts. For example, strobing or changing light intensity in reaction to intrusion attempts, or triggering alarms and automatically selecting applicable camera views in video management software.

Security starts at the perimeter

The first step of any security plan is to deter intruders. While a fence alone provides an initial barrier, it can be cut, climbed or otherwise broken through. An effective security system should immediately alert security to exactly when and where an intrusion is occurring, as well as communicate to intruders that their presence is known, they are being watched and response forces may already be dispatched. That’s why fence-mounted sensors and other perimeter intrusion detection systems are increasingly being used to protect utility sites. They are field-proven, difficult to defeat and work reliably in all-weather conditions.

When an intruder is detected, the generated alarm (which includes intrusion zone or precise location, typically to an accuracy of 6m along a fence line) can be used to trigger other on-site security resources, including PTZ cameras and deterrent devices such as sirens, loudspeakers or other security lights. The system can be monitored by centralised security personnel, enabling them to assess the situation remotely and dispatch a response if required.

When intelligent security lighting is added, it expands the capabilities of perimeter intrusion detection systems by enabling additional deterrent and assessment capabilities:

A better approach to lighting

Despite being widely used, indiscriminate security lighting has substantial costs and some drawbacks. Traditional technologies such as high pressure sodium (HPS) and metal halide (MH), are expensive to install, require periodic maintenance, and cannot be switched on and off rapidly. As a result, they usually remain on all night, following a simple time-based schedule. In addition, these technologies, as well as their newer LED-based replacement fixtures, generate light pollution due to their wide coverage area. Light pollution can be a significant concern for facilities located near sensitive areas like protected nature reserves or airports. For sites adjacent to residential areas, the use of indiscriminate high-powered lighting can lead to complaints and infringe upon local or state bylaws and regulations.

The first step to reducing light pollution is to use low-voltage engineered LED lighting that directs light downwards and along the fence line, thus meeting the International Dark Sky Association’s (darksky.org) recommendations of using targeted lighting only where needed. Targeted, top-shielded luminaires minimise light escaping upwards or horizontally. In addition, lights must be dimmable and minimise blue light emissions. 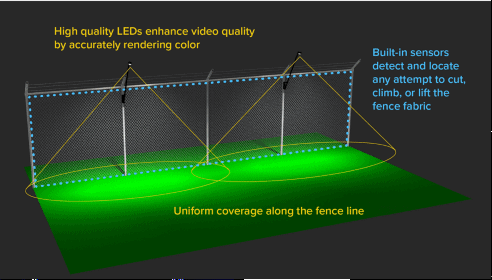 The Senstar LM100 Hybrid Perimeter Intrusion Detection and Intelligent Lighting System limits its coverage to where it is needed, while embedded accelerometers detect attempts to cut, climb or lift the fence fabric.

Total Cost of Ownership (TCO) of the Senstar LM100 compared to other security lighting solutions.

Avoiding nuisance alarms generated by weather, animals and lawful people is critical to the overall success of a perimeter security system. Too many nuisance alarms may lead security personnel to become complacent, ignoring valid alarms or hesitating to initiate a response until it is too late. In addition, the cost to send response forces to a remote site may prohibit a response unless the threat is validated.

A perimeter security system should be designed from the outset to minimise nuisance alarms:

Integration with other systems for effective, multi-layer security

They can also be interfaced at a low level to alarm panels, or a low or high level with other monitoring systems. The mainstream adoption of low-voltage LED-based lighting combined with low-cost embedded processors has revolutionised the lighting industry, with new applications being introduced every day. The physical security market is benefitting from these advancements and can expect many new cost-saving products, all which can benefit from mature detection and nuisance alarm rejection algorithms.

Other technology options from Senstar

Senstar has a fence-mounted cable intrusion detection system called FlexZone, which can detect intrusion attempts to an accuracy of 3m.

FiberPatrol is a fence-mounted fibre optic intrusion detection sensor that detects and locates intruders climbing, cutting or lifting the fence fabric to an accuracy of 4m. It is a popular product for electrical utilities and oil and gas facilities, as the fibre cable is non-conductive and carries no power that could produce a spark

The link below discusses some use case scenarios for electrical, water and oil and gas facilities.

The link below is for a webinar discussing physical security solutions for electrical utilities, which is also relevant for other utility types.