Investing in the future of water assets Aging infrastructure presents a key challenge to the water industry. Deteriorating assets threaten to undermine continuity of water supply and water quality. Industry-wide reform is required to ensure long-term asset investment decisions can be made without causing significant increases in the cost of water. Water utilities need to make prudent investment decisions in order to maximise the life of water assets. This paper considers the rehabilitation of concrete tanks, finding that a large multi-site rehabilitation program can be executed to effectively extend service life and maintain safe water supply.

The Australian water industry owns and operates assets with a combined value of over $160 billion. There are 220 urban water authorities supplying water to over 20 million people and employing over 31,000 people, with 75,544GL supplied in 2015-16.

It is a significant industry adding over $13 billion to the Australian economy in 2015-16. Annual capital expenditure is estimated to be between $3.5 and $4.5 billion, 8.7 per cent of national infrastructure investment.

The price of water is low but, unless some significant reform in the industry occurs, prices are set to rise dramatically in the coming decades. In 2017, the annual cost of water to households was $1,226. In order to maintain the current standard of water supply, Infrastructure Australia modelling predicts the annual household water bill will increase to $1,827 by 2027 (50 per cent increase) and to $2,553 by 2040 (more than double).

Maintaining, renewing and replacing aging infrastructure is one of the major drivers for cost increases and presents a key challenge to the water industry. The Australian Water Association report State of the Water Sector 2015 found that investing in asset maintenance, upgrades and augmentation was the number one priority for water sector reform.

The 2017 Infrastructure Australia report Reforming Urban Water noted that some urban water systems will require a step change in investment. The 2018 Australian Industry Standards Water Industry Key Findings Discussion Paper found that ‘the water industry is highly reliant on infrastructure, which requires ongoing maintenance and renewal. Given the dependency on aging infrastructure and increasing urbanisation, new challenges are anticipated to emerge. Water supply management, quality control, and compliance will present complications that must be addressed’.

Water utilities need to consider the long-term interests of customers when making investment decisions. The Water Services Association of Australia (WSAA) identified that additional infrastructure and expenditure for water distribution systems will be required to meet the challenge of aging infrastructure.

A key element of the water distribution system is water storage within the system. The Australasian Corrosion Association (ACA) Corrosion Challenges study found that approximately five per cent of the total cost of deteriorating assets was caused by tanks and similar assets, equating to an annual cost across the water industry of $42 million per year.

This paper outlines the approach of a large water authority to rehabilitation of concrete water storages to ensure supply and meet long-term demand for water.

The potable water supply in South Australia is primarily supplied by SA Water. The utility has a large network of reservoirs, treatment plants, tanks, earth bank storages, pipelines and pump stations which carry the water from the source to the customer.

Included in these assets are over 700 storage tanks, of which over 600 are concrete tanks. SA Water has a dedicated team of asset managers that manage these tanks, prioritise maintenance and renewal works, and plan for capital works.

In 2016, SA Water began a four-year program to upgrade and refurbish these 92 tanks. These tanks were prioritised due to condition, criticality and opportunity, and the majority were concrete tanks with steel roofs.

The cost of the refurbishment is approximately $70 million. This is a major investment in ensuring safe and reliable water for the people of South Australia. It is the largest renewal program of its type that SA Water has ever undertaken. Indeed, it is one of the largest ongoing concrete rehabilitation programs in Australia. 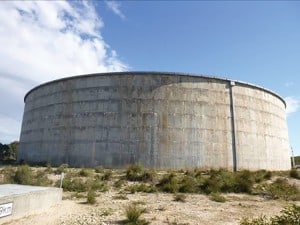 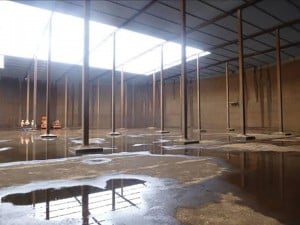 The scope of work for each tank was determined through a series of inspections. In order to capture the various aspects of the scope, the tanks were broken down into elements as per Figure 3. This breakdown is largely consistent with the WSAA Condition Assessment Guidelines for Civil Structures. Each element was assigned a Condition Grade correlating with the observed condition during inspection, and repair actions were determined.

Figure 3: Elements of each tank.

For a state-wide renewal program with so many different sites and so many variations of tank configuration, it was not efficient to design a specific rehabilitation solution for each site. 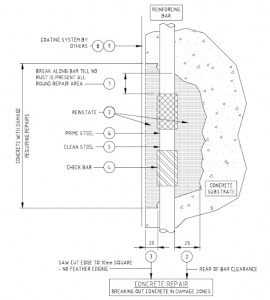 Therefore, some typical drawings were developed for expected scenarios for the rehabilitation of spalling concrete and for the repair of concrete columns.

Two types of concrete repair were developed, to repair scenarios where excessive reinforcement corrosion has occurred and where it has not occurred. The requirement for the concrete repairs was to return to standard configuration and provide an additional 40 years’ service life. A schematic view of the typical repair is provided in Figure 4.

The simplified sequence of work was as per Table 1. 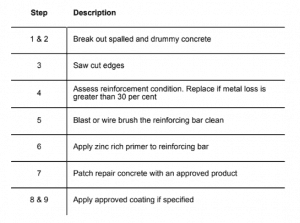 Delamination of concrete on external walls was found by tap testing. Simple pH testing for depth of carbonation was conducted using a drill and phenolphthalein solution.
For many tanks in the program only a small number of repairs were required, less than 3m2, although the most significantly affected tanks required up to 30m2 of repair.

The mechanism for this type of corrosion of reinforcement and subsequent spalling is carbonation. Concrete spalling was more noticeable in areas of low cover.

The internal condition of the concrete walls was generally good. The common design included more than 50mm concrete cover to reinforcement and this has proven to provide good protection to the reinforcement. Minor issues had occurred with old fittings and remnants of formwork that had been embedded in the concrete.

Previously, issues with circumferential construction joints were reported and these continue to be common in older tanks. These were repaired with Hypalon® strip. Some tanks exhibited minor cracking believed to be associated with movement and were repaired by crack injection methods. 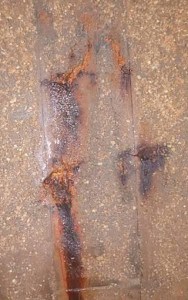 Figure 5: Visual appearance of concrete surface with evidence of steel reinforcement corrosion within the wall.

Two instances of severe corrosion of reinforcement had occurred as shown in Figures 5 and 6. These areas had suffered severe localised corrosion and metal loss. In both cases, the concrete appeared to have been poorly compacted which may have contributed to severe corrosion in these locations, whereas nearby areas did not experience the same corrosion.

Other contributors may have been local concrete cracking or poor quality steel. In the case of poor compaction and local cracking, the diffusion rate of chlorides to the steel surface was likely to be higher. 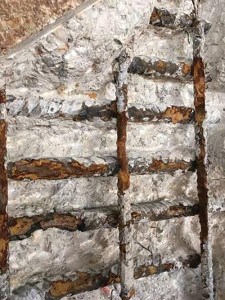 Figure 6: Reinforcement condition of the area identified in figure 5 after concrete was broken away

The columns presented some particular structural challenges in terms of concrete rehabilitation. The columns are tall slender elements that have a foundation in the floor slab and are connected at the top to the roof support structure.

SA Water tanks constructed before the 1960s were designed such that the roof directed rainwater into the tank. However, this created water quality issues due to pollutants from the air, leaves and debris entering the water. From the 1960s onward, the roofs were constructed so that the rainwater flowed to perimeter gutters and into a site stormwater system.

Consequently, the roofs had to be raised to achieve the required pitch and this was done by increasing the height of the columns. A number of methods were used; steel stubs, stainless steel stubs and in situ cast concrete either to the same dimensions as the original or to a larger cross section to provide additional concrete cover to the reinforcement.

It was found during site inspections that the tops of the extended concrete columns often suffered steel reinforcement corrosion and spalling. When the spalled concrete was removed, the most common contributor to premature failure was low concrete cover to the reinforcement.

In that case, reinstating the column to the original dimension by patch repair would not provide the durability required for the ongoing service of the column due to the cover remaining low. Therefore, additional concrete material needed to be applied to achieve the required cover to reinforcement. Installation of this additional material created a construction challenge.

Industry feedback led to designs that incorporated fibreglass jackets as formwork. These jackets could be stacked for the full height of the column and filled with grout to create a new larger column (Figure 7).

Further review led to the use of a carbon fibre wrap solution which could readily be applied to the tops of the columns without creating an increased weight issue (Figure 8). This solution was found to be more efficient in terms of time and cost than the jacket style solutions. 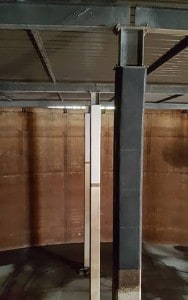 A significant concrete rehabilitation program for potable and raw water concrete tanks has been undertaken by SA Water, which has involved detailed planning, site visits and construction activities at 92 sites across South Australia.

It has been found that steel reinforcement corrosion within concrete columns has occurred above and below the water line. The proposed mechanism for the above the water line corrosion is carbonation with additional influences from soft water attack and stressing of the columns due to daily expansion contraction cycles.

The corrosion below the water line was unexpected as this type of corrosion has not been common at SA Water in the past. The proposed mechanism for the corrosion below the water line is alkali leaching coupled with chloride ion ingress. Severe reinforcement corrosion has occurred at anoxic zones adjacent to concrete cracks that extend to the reinforcement. Rehabilitation options for the deteriorated concrete have been developed.

The evolution of the renewal program has involved a number of unexpected challenges and continuous improvement opportunities.

The size and complexity of this state-wide program has included up to thirty simultaneous work sites and created many logistical challenges. The condition of every tank at the start of work on each site has been different. An effort has been made to develop typical solutions, but particular attention needs to be paid to the actual condition at each site to ensure adequate rehabilitation works are completed.

The water industry in Australia faces many challenges but key amongst these is aging infrastructure. Significant investment in asset rehabilitation is required in order to maintain the required level of service to customers, both in terms of water supply and water quality.

This paper has provided a snapshot of one program at one water authority. Similar projects are underway across Australia as part of the ongoing effort to meet the challenge of aging infrastructure.

If existing assets are not maintained, the cost of future replacement will result in increases in the cost of water. The AWA 2016 Australian Water Outlook states that lack of investment in infrastructure now will be costly in the long run.

Paul Vince is a corrosion engineering consultant that works with clients to maximise the life of assets. He is primarily involved with condition assessment and remediation options for concrete and steel structures.