Levelling the playing field for local energy through tarrif reform 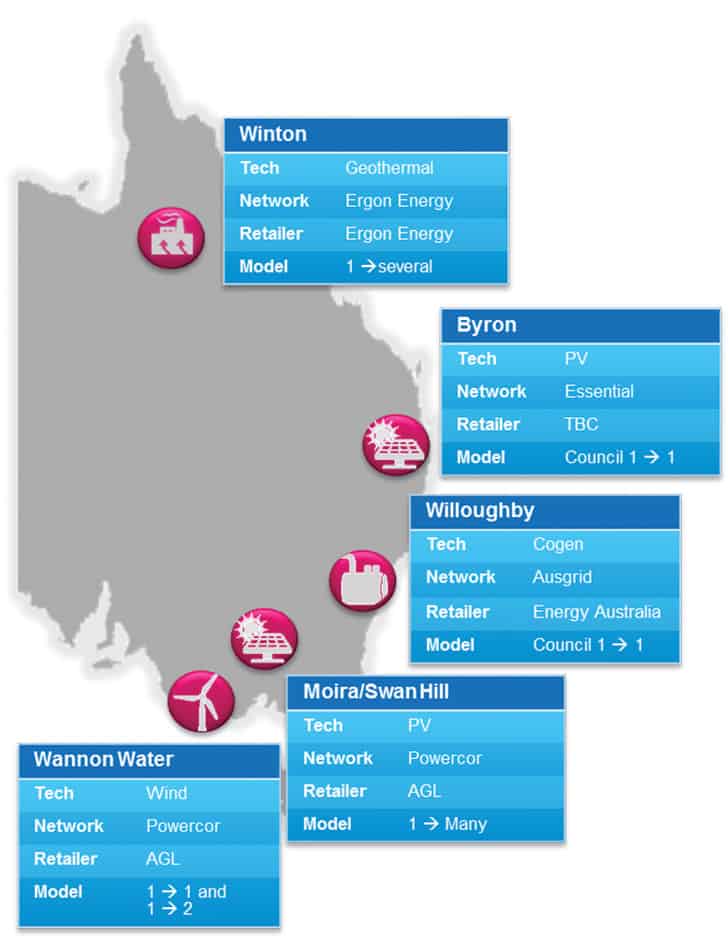 The electricity market is changing as technologies like solar panels and battery storage improve and become more affordable. Widespread uptake of battery storage now seems to be a question of when, not if. Many consumers are interested in not only using electricity, but trading with the grid and with each other, becoming prosumers who generate some or all of their own electricity and sell the excess back into the market.

Improving the business case for small­-scale, embedded electricity generators to sell electricity locally, by offering innovative tariffs and billing arrangements, could unlock substantial new clean energy potential and reduce the negative impacts of customers taking their load off the grid.

To give an example, small to medium businesses (such as local councils or universities) may want to generate electricity at a site with a suitable renewable energy resource, and use it at another of their nearby sites with high electricity demand, using only a small proportion of the distribution network.

Network businesses do not currently offer tariffs to reflect limited use of the system to transport electricity between nearby sites, saving future network costs by reducing use of the upper levels of the grid. Nearby sites may be as close as two metering points in the same building, or across two sides of a road.

Electricity retailers do not routinely offer the capability to ‘net off’ energy generated at one site at one or multiple other sites. This means that local generation is sized to match the lowest on-­site electrical load to minimise grid exports, reducing economies of scale and operating efficiency.

There are plenty of examples of cogeneration plants that are undersized or under-­operated because of the need to restrict operation to match on­-site electrical load.

Current incentives encourage local generators to keep consumption behind the meter (load defection), or even disconnect from the grid through building a private wire (a duplicate, privately owned, distribution line connecting one or more assets) to avoid using the existing electricity network.

If less electricity flows through the network, the relative cost of network electricity will rise for the customers who are unable to generate their own electricity. This will further incentivise defection from the network, reinforcing the cycle.

The Institute for Sustainable Futures at the University of Technology Sydney is leading a project, funded by the Australian Renewable Energy Agency (ARENA) and other partners, that brings together consumers, researchers, electricity providers and government to help level the playing field for local energy generation, and prepare for the electricity grid of the future.

The project is researching the impacts of paying credits to local generators to reflect their long-­term impact in reducing future network costs, and Local Electricity Trading (LET, also known as Virtual Net Metering) between associated customers and generators in the same local distribution area.

The centrepiece of the research is five ‘virtual trials’ of Local Generation Network Credits (LGNCs) and LET in New South Wales, Victoria and Queensland, which are currently nearing completion.

The research project has also undertaken extensive background research and stakeholder consultation. The results of the trials will feed directly into the Australian Energy Market Commission’s (AEMC) consultation on a request for a rule change on LGNCs.

The project will provide case study evidence for a LGNC, a recommended LGNC methodology, and economic modelling of the effect on consumers. It is the first time LGNCs have been tested in this way in the Australian market.

At the time of writing, four out of the five virtual trials are nearly complete and the story they tell is clear. Business as usual, with no change to the status quo, is the financial worst case scenario for embedded generators, and they are incentivised to keep generation behind the meter, or to install private wires which take large elements of load offgrid.

Network businesses will need to work together with local generators to agree on business models that meet customer needs and ensure better outcomes.

The private wire scenario generally represents the worst scenario for the network businesses and retailers, and the loss of revenue to the utilities is not reflected in the benefit to the consumer. This is not that surprising, as reduced payments to the utilities are simply funding an inefficient duplication of existing infrastructure.

While the introduction of local generation network credits will mean reduced payments to network businesses, they offer the opportunity to maintain network utilisation and ultimately result in more modest reductions in network revenue – and associated rises in customer costs – than in the alternative private wire scenarios.

Detailed results from the trials will be available during May, from the project website, https://bit.do/Local­-Energy

LET may offer opportunities for retailers to differentiate as new business models and products evolve, and it may boost customer retention in a climate where engaged customers are demanding greater choice and control over sourcing their energy supply.

LGNCs will more fairly reflect the impact of local generation and consumption on the electricity network. Combined with the ability offered by LET to net off electricity at other sites, it will incentivise local generators to keep utilising the grid, which in the long term is the preferred outcome for everyone.

Alison Atherton, Jay Rutovitz, Edward Langham, Lawrence McIntosh and Sven Teske at the Institute for Sustainable Futures are the authors of this article. We would like to thank all our project partners for their hard work and input on the project but any views in this article are ISF’s alone.