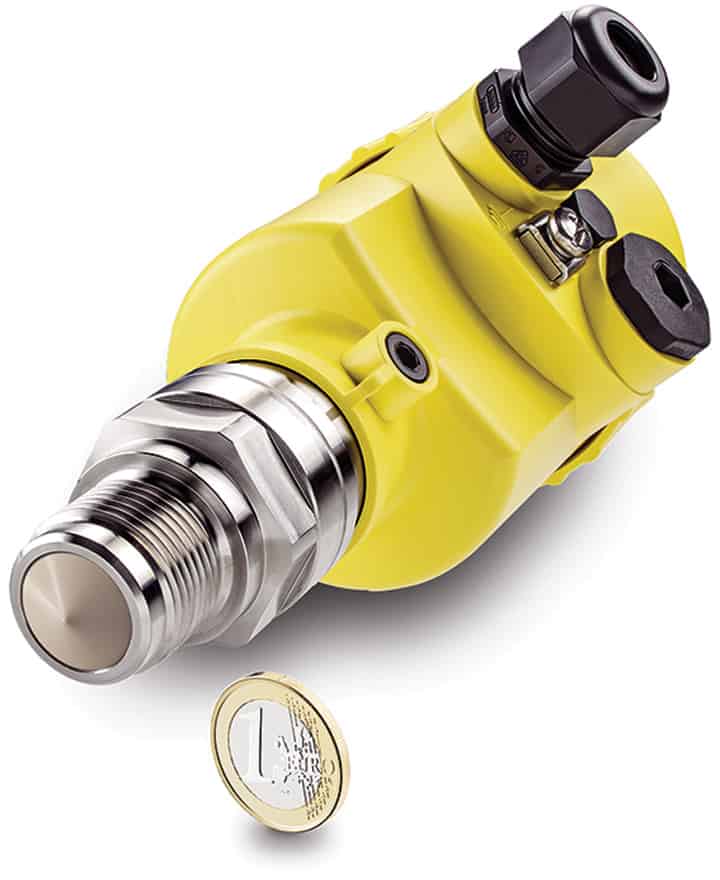 VEGA has launched the first radar level sensor for liquids that measures with a frequency of 80 gigahertz onto the market with the VEGAPULS 64.

The biggest advantage the VEGAPULS 64 is the better focus of the radar beam. Greater reliability is now achieved, even under the most difficult conditions, such as internal structures, low reflectivity, build up, surface foam and condensation.

Radar level transmitters have largely replaced previous equipment including float-based systems or ultrasound devices in many areas of industry. Areas of application have gradually been expanded so that users are using this technology more and more.

VEGA has now installed more than half a million radar sensors worldwide. 18 months ago, thanks to some new developments in electronic components, VEGA launched the VEGAPULS 69, an 80 gigahertz (GHz) bulk solids radar level sensor onto the market.

This device was revolutionary, because it used this higher measuring frequency with a narrower focusing of the radar beam, delivering a major leap forward in bulk solids level measurement.

Consequently, it was no real surprise that there was demand for a high frequency radar level sensor for liquids.

Measurement of liquid level also presents many challenges, including agitators and other internal installations, build up in the vessel or deep pump shafts.

In applications with very high signal attenuation or interference reflections, the measuring tasks could previously only be solved with a great deal of technical input or by accepting some performance limitations.

Now VEGA has set a new milestone: the VEGAPULS 64 is the world’s first level sensor for liquids that also uses the 80GHz frequency range. Once again, this enhanced focusing helps to further distinguish the level measurement signal from interfering signals, especially in containers with internal installations.

VEGA launched the VEGAPULS 64 in May 2016. The advantage for the user is that some of the electronics and technologies have been adopted from the bulk solids radar measuring instrument.

This means that tested, proven components are already available, but there are still some significant differences.

The VEGAPULS 64 operates with a 4GHz bandwidth, so that an even better, clearer separation of all the reflected signals is possible. Of course, the parameters and application configurations that are stored in the measuring instrument have naturally been adapted and optimised to liquids applications.

In the VEGAPLUS 64 the radiation angle is now only 3°. This enables the sensor to measure the level reliably in containers with agitators or installations such as heating coils.

If interfering signals have the same form as the level echo, a reliable measurement is very difficult. Previously, with 26GHz transmission frequency, the beam angle with an antenna size of DN80 was approximately 10° with a radar sensor.

With the VEGAPULS 64, the beam angle is much more focussed at only 3°. This results in a sensor which can now also be used reliably in containers with installations or even build up stuck to the container wall, because the narrower measurement beam simply passes by them.

The dynamic range, or sensitivity of a radar sensor (i.e. the difference between the largest and smallest signals it can distinguish), defines which areas of application it can be used in.

The greater the dynamic response, the higher the measuring certainty and thus the wider the range of applications it can be used on.

The VEGAPULS 64 has an extremely wide dynamic range – never before has there been a radar sensor for liquid applications which can cover a range as wide as this.

This means that media with poor reflective properties, such as a low dielectric, can be measured more effectively than with previous radar sensors.

This greater measuring certainty enables a reliable liquid level measurement with surface foam, on extremely turbulent filling level surfaces, even with condensation or deposits on the antenna. The transmitter accuracy is +/-2mm and the filling level can also be measured very close to the bottom of the container.

The commissioning of the VEGAPULS 64 is already much easier, because the complicated interfering signal mapping is largely dispensed with.

The plics®, concept with which the new VEGAPULS 64 is designed, brings all the usual additional convenience.

In addition, the very narrow measuring beam makes it easier to mount the VEGAPULS 64 onto existing nozzles and upstands which would have before caused problems.

This is very interesting for applications where the complete container is governed by pressure testing and insurance regulations, and not easily modified.

Normally a long narrow nozzle creates interfering signals; however, because of the focused measuring beam of the VEGAPULS 64, it avoids internal edges, so that there is no need to re-engineer the mounting for a reliable measurement.

The plastic antenna is an excellent solution for good focusing in many applications. Thanks to the tighter focusing, users can often work with a much smaller antenna than before. The smallest antenna is no bigger than a one dollar coin, so that the new measuring instrument is an ideal solution for installation in small containers. 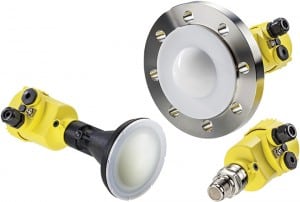 The right sensor design for every application: The VEGAPLUS 64 has a variety of antenna systems in different sizes.

The new radar level sensors have been installed since December 2015, with a pilot series of 200 test sensors in different industries and applications worldwide.

Like for the bulk material radar, applications were chosen that were previously considered as problematic or impossible to measure reliably.

In these applications, the echo curves were recorded to further process and optimise the sensor performance on this basis.

The first series instruments will be coming onto the market in May.

It is already evident that the new VEGAPULS 64 radar level sensor will become a problem solver in storage and reaction vessels with many internal installations and agitators.

The sensor has demonstrated itself to be insensitive to extreme process conditions, foam or caking. Even containers with heating coils, or narrow pump shafts in wastewater treatment, are applications the new VEGAPULS 64 masters with ease.

Thanks to its small process connections, it is highly effective in many applications in the pharmaceutical and food industries.

New process connections will be offered, with all PTFE wetted materials for use in an aseptic area, and they will meet the requirements of 3A, FDA and EHEDG. Approvals for use in hazardous areas are also available.

This partner content is brought to you by VEGA. For more information, visit www.vega.com or click here to have the information sent to  you.