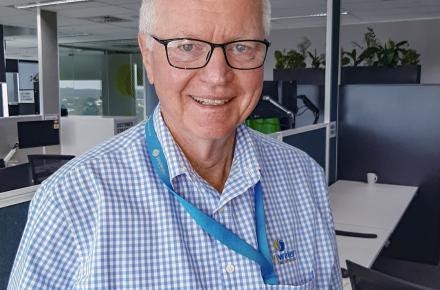 Seqwater Principal Customer Coordination Officer, Colin Nicolson, has announced his retirement, after working in the water industry since the mid-1980s.

Mr Nicolson said it is the people he will miss the most.

“We have come a very long way in Seqwater in our relationship with our irrigation customers,” Mr Nicolson said.

“I have met many of them and have very much enjoyed my interactions with them.

“I will also greatly miss my Seqwater colleagues. Working here has been one of the greatest privileges of my life.”

Mr Nicolson said he didn’t end up working with water on purpose, first coming into contact with the industry via his finance and accounting background.

“My water industry experience has been in irrigation and industrial water supply, first entering the field when I joined the Queensland Water Resources Commission as an assistant accountant in the mid-1980s,” Mr Nicolson said.

“My ongoing involvement in the industry came a few years later, when I was given the opportunity to help commercialise the water resources operations group, which was part of the Department of Primary Industries, with the ultimate goal of becoming a Government Owned Corporation.”

“What was very interesting from an accounting and finance point of view was how to recognise and value water infrastructure assets and how to fund the business and new commercial investments including profit-making pipelines,” Mr Nicolson said.

“Further on again, it has been during my time at Seqwater that I have had much closer contact with customers which has added a lot of interest to my workday.”

Mr Nicolson recalled some of the changes he has seen during his time in the water industry, many of them for the better.

“Although some customers think the old days were better, most agree that the changes have given them much more flexibility.”

Mr Nicolson said that the Water Management Framework has provided both Seqwater and Sunwater with the ability to amend the operational rules in consultation with customers and the overseeing department.

“The benefits of this flexibility has already allowed Seqwater to help customers,” Mr Nicolson said.

“Nationally, the changes in the water industry since the COAG days of the mid-1990s has placed the management of water well and truly on the national agenda.

“This has helped focus the attention of governments and water users alike on the need to carefully and efficiently manage this scarce resource which is essential for life.”

Mr Nicolson said he plans to make the most of his retirement.

“I intend to keep active in retirement,” Mr Nicolson said.

“We are planning to do some caravanning and see more of Australia.

“Of course there is a long list of projects at home to which I will be able to devote more time including my vegetable garden.

“I’m not seeing too many dull moments at this stage.”