Managing the risk of falls in the water and wastewater industry Working around sewage pits can be dangerous due to the high risk of falling. To ensure the safety of workers, companies should implement grates and covers that reduce trip hazards, have the correct load rating specifications and give workers pit access without being exposed to open wells.

In early September 2016, a council employee working with an external contractor to pump sewage pits in Far North Queensland fell more than seven metres into the well.

According to Workplace Health and Safety, the incident happened while the council worker was replacing grates covering the sewage pit. Local media reported the man, aged in his 30’s, escaped with minor head and shoulder injuries, but the outcome could have been much worse.

Australia has strict codes of practice designed to protect workers whose jobs involve heights and confined spaces, and for good reason – these are high-risk but vital activities.

Persons Conducting an Undertaking or Business (PCBU) have the primary duty of care under the Workplace Health and Safety Act, “to ensure, as far as reasonably practicable, that workers and other persons are not exposed to health and safety risks arising from the business or undertaking”.

Further, the employer is expected to manage the risk of falls.

Safe Work Australia statistics showed 232 workers were killed following a fall from a height between 1 July 2003 and 30 June 2011, 11 per cent of all workers killed in this period.

HP Agency director, Paul Harazim, said while fewer people died in these types of circumstances than 20 years ago, he believed one death was one too many.

“There is no need for these types of accidents to happen; the worker in Far North Queensland had a lucky escape and could’ve been more seriously hurt, or worse,” he said.

Safe Work Australia recorded 12 deaths where workers fell into a pit or hole between July 2003 and June 2011, half of which occurred at mine sites. 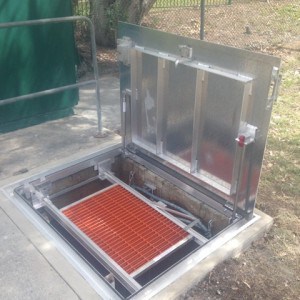 In that same period, three workers fell into sewer pits. They died from asphyxiation rather than injuries from the fall. Claims for serious injury due to a fall from a height totalled 7730 in 2010/11.

“Workplace injuries and fatalities cause heartbreak for families and are costly for employers. They also tarnish a business’s reputation,” Mr Harazim said.

“Falls from heights are easily preventable if compliant access covers and safety grates are installed and workers adhere to the regulations.”

Mr Harazim said his observations at pumping stations and reservoirs across Australia in recent years revealed a number of disturbing safety issues.

“Despite the strict regulations, many workers are still forced to lift overweight access covers and risk tripping over raised hinges on access covers and covers that exceed the 6mm height restriction,” he said.

“It’s also concerning to see traditional fixings, such as chemical anchors and Dynabolts, still being used in harsh environments like sewer pumping stations to support safety nets and grating panels; it’s impractical to test the integrity of each and every one of those fixings.

“Another recurring issue is the use of access covers made from general purpose materials which don’t meet load rating specifications. Not all these covers are old and outdated; some were actually designed in Australia in recent years.

“Ultimately, workers should be able to safely carry out maintenance without needing to remove or lift the grating panel, unless they need to enter the pit. If they do, the panel should be easy to open and the only time the worker is required to be anchored. The technology is available.”

Mr Harazim said while in the process of developing a system to address the prevalence of non-compliant access covers and gratings for a variety of sites, he learnt of a US-based company which had the answers.

“Halliday Products has been developing technology and innovative products for the water and wastewater industry for 45 years.

“Halliday Products not only meet Australian standards, but exceed them and are covered by a lifetime guarantee.”

HP Agency is the exclusive Australian agent and marketer for Halliday Products, which was introduced to the market in 2014.

Halliday Products’s grate system does not interfere with pump rails and gives workers access to all electrical equipment for calibration, without being exposed to an open well.

Pump services can also be carried out without exposing anyone while the pump is being removed and cleaned.

“Every worker should be able to return home safely to his or her family at the end of every work day. It’s the responsibility of his or her PCBU to do their best to see that it happens.”

This partner content is brought to you by HP Agency. For more information, visit www.hpagency.com.au.