With Australia’s renewable energy transformation well underway, investment in Distributed Energy Resources (DER) projects is on the rise. Here, Utility maps out some of the country’s most significant DER initiatives to date.

DER refers to renewable energy systems that typically generate energy at houses or businesses, and can provide energy back to the grid when needed. Rooftop solar PV units, battery storage, thermal energy storage, electric vehicles, smart meters and smart household  technology, such as hot water systems or smart appliances, are all examples of DER.

With demand for DER expected to grow, it is estimated by Energy Networks Australia’s Electricity Network Transformation Roadmap that DER could contribute up to 45 per cent of Australia’s power by 2050.

DER offers many advantages including reduced network costs, which could also lead to a fall in the overall cost of energy. Reduced costs can extend to customers who use DER, as they can sell surplus energy back to the grid, which is especially needed during peak periods.

This can increase the overall reliability of the grid, especially when used to supplement regions that have a high reliance on intermittent energy sources such as wind and solar.

The challenge is navigating the technical issues that arise when integrating DER into the grid, with companies and government departments looking at how to do this at scale.

In many cases, this means grid modernisations are needed to ensure that DER are safely implemented into the network. As investments in DER research, feasibility studies and projects multiply year on year, we take a look at how each state is advancing their own DER plans with the major projects in development.

Project EDGE (Energy Demand and Generation Exchange) is Victoria’s three-year trial that aims to demonstrate a proof-of- concept DER, which could provide both local and wholesale network services.

The $28 million project is a collaboration between the Australian Energy Market Operator (AEMO), AusNet Services and Mondo, and will see the creation of a prototype model for DER to contribute energy to the National Electricity Market (NEM).

Residential, industrial and commercial customers from the Hume region of North East Victoria are involved. Initially, the project will involve around 50 residential customers, but will scale up to 1,000 customers.

Participating residents will have access to battery subsidies of $1,000, with a participating payment of $1,000 per annum and a free UBI energy management system. Businesses involved in the project will be offered a solar PV system power purchase agreement with no upfront capital and the first three months of energy free. They can also access a $6,000 per 50kWh system battery subsidy and will be provided a free UBI energy management system.

With research guidance from Deakin University and Melbourne University, the project will demonstrate how a group of small battery solar systems can result in better responses from the electricity network, reducing outages and lowering energy prices.

The project aims to demonstrate a marketplace where customer-owned DER are integrated into the electricity distribution network, improving understanding of the future roles of distribution system operator functions, and gaining insight into the overall costs and benefits of different DER marketplace models to inform future planning.

Victoria’s Indra Monash Smart City project aims to integrate DER technologies into the embedded network at Monash University’s Clayton campus. Indra will use its innovative platform to monitor the grid-connected assets in real time, including a minimum of 1MW of solar panels, 20 buildings, electric vehicle charging stations and 1MWh of energy storage.

Western Australia’s $35.5 million Project Symphony will see the development of a DER within the South West Interconnected System in Perth.

Western Power has partnered with Synergy and AEMO to deliver the pilot, which will take place over two years and see 500 customers with over 900 individual DER assets connected to a virtual power plant.

The project aims to effectively coordinate and manage DER assets such as rooftop solar, major appliances and battery storage with energy distribution software systems. Ultimately, the project is set to identify the further investment needed to expand DER in Western Australia, and inform the state’s DER Roadmap.

The Onslow DER project, delivered by Horizon Power, is a microgrid which services the town with a mix of energy sources, including renewables, modular gas-powered generation and battery storage.

Horizon partnered with PXiSE Energy Solutions to provide software for a Distributed Energy Resources Management System, which is expected to address reliability and operational issues facing the DER.

This new energy retail model aims to show how enabling technologies with high levels of solar photovoltaics (PV) can be integrated.

South Australia’s strategy to grow the presence of DER in the state focuses on extending and transforming its existing network, particularly capitalising on the extensive use of rooftop solar already in place.

Solar battery storage systems across 1,000 households and businesses in Adelaide will be connected and managed by a cloud-based control system at AGL’s Virtual Power Plant (VPP) – the largest in the country.

The $19.52 million connected system allows the batteries to operate together as a 5MW solar power plant, and takes advantage of South Australia’s extensive uptake of rooftop solar. AGL has since announced an extension of its Virtual Power Plant, launching installations for residents in Queensland, New South Wales and Victoria.

Customers from these states will be able to buy Tesla batteries or LG Chem batteries with Solar Edge hardware at discounted prices as part of the VPP program. In return for allowing AGL to access the batteries during off-peak times to improve network reliability, customers will receive payments from AGL.

Developed by Restech, the Enerverter Project Aztec is a small power inverter which controls multiple power sources, such as battery power and solar PV simultaneously. The power is used to operate industrial-sized motors. The project involved developing a prototype, testing real-world water and wastewater applications, and then commercialising the product.

The multi-input, multi-output inverter uses energy storage to power water pumping and treatment, and can be used to balance out the energy demands of the application.

This $2.19 million study, led by the University of New South Wales in partnership with AEMO and Solar Analytics, aims to understand how DER reacts to energy system disturbances.

Project MATCH (Monitoring and Analysis Toolbox for Compliance in a High DER future) will inform future practices and what measures should be put in place to ensure a reliable system with high levels of DER.

The study aims to develop new data analysis tools and techniques which can be used to help the AEMO manage DER implementation, such as making changes to contingency Frequency Ancillary Control Services (FCAS) or constraints.

The evolve DER project focuses on the software systems that are integrated with operational technologies used to manage distribution networks. Led by Zeppelin Bend in collaboration with industry bodies and government, the project aims to increase the network hosting capacity of DER while staying within the capacity of those networks. The intended result of the study is to develop scalable capabilities and systems to better orchestrate uptake of DER in networks.

Optimal DER Scheduling for Frequency Stability study This study, conducted by The Australian National University (ANU) in partnership with TasWorks, Powerlink Queensland and Tenische Universitat Berlin, will investigate how to best schedule DER to provide low-cost stability services while not exceeding network capacity.

The investigation involves the development and testing of software to orchestrate fleets of DER in distribution networks and allow them to provide frequency control ancillary services.

Using Evoenergy’s Advanced Distribution Management System (ADMS) and Schneider Electric’s DERMS, the project was able to demonstrate network models of current and future scenarios, before applying it to simulated fleets of DERs within deX to demonstrate additional network hosting capacity. 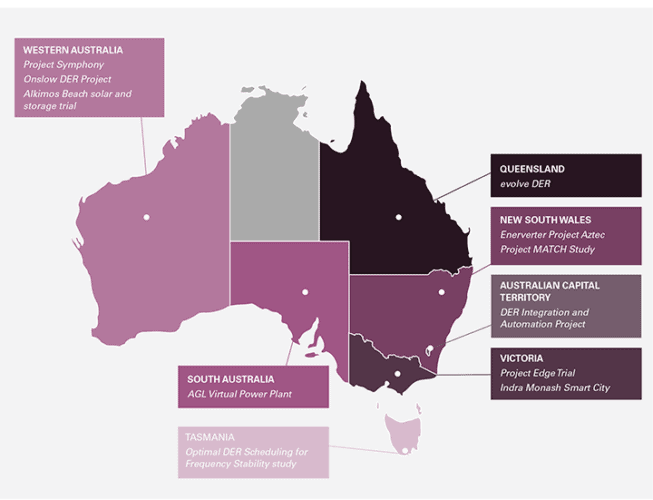 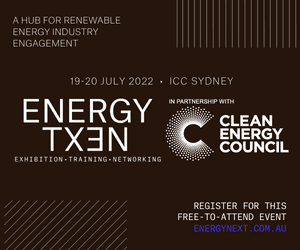