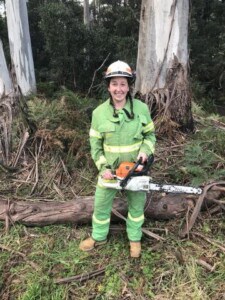 Melbourne water has begun advertising for seasonal crew members with roles beginning in October and running through until autumn.

“Everyone is ready to do what is necessary with little complaints, and you are always in for a laugh every day.

“I’ve made some friends on these campaigns that I will keep forever, and we will also have that bond over our experiences that no one can truly understand.”

Ms Kinsey said being at the frontline of protecting the natural environment she’d been fascinated with since a young age was a valuable experience.

“I was always running off on my parents to go and explore the bush, beaches or waterfalls they would take me to,” Ms Kinsey said.

“From that young age I knew I would work in the environmental sector.”

Ms Kinsey joined Melbourne Water’s firefighting crew as a summer casual two years ago and after enjoying the experience so much, she jumped at the chance at a full-time role.

“It was the best decision I have made,” Ms Kinsey said.

“Being part of a great team with a goal to try and save people’s homes and lives and protecting Melbourne’s water supply, words can’t describe how rewarding that is.

“My family and friends are extremely proud of me and can see my face light up whenever I talk about my job.”

From protecting the major dams in greater Melbourne’s water catchments to supporting colleagues from other organisations fighting last summer’s devastating bushfires in Victoria’s east, Ms Kinsey has quickly built up a wealth of experience on the frontline.

“From being on the frontline actively trying to stop the fire to following up once the fire has gone through, making sure that all the hot spots are out so that the fire won’t reignite – and everything in between.

“When not fighting fires the role varies too. There is a focus around fire preparedness of the catchments.

“We spend two months cleaning any debris that may have fallen over the winter and then maintain them throughout the summer.”