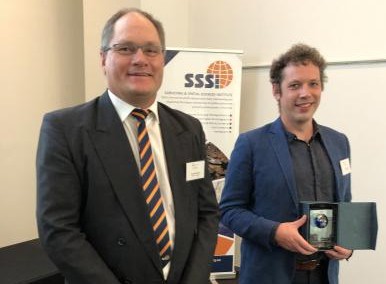 In the Asia-Pacific Spatial Excellence Awards, Melbourne Water has taken a trio of prestigious accolades within the Victorian category.

A collaboration between Melbourne Water and FrontierSI to create a program where drones can automate the counting and detection of plant species in water was acknowledged with the Spatial Enablement award.

The machine learning approach can ensure issues are identified, detected and managed early in a consistent and repeatable manner.

Run by the Spatial Industries Business Association and SSSI, the awards celebrate the achievements of top spatial information enterprises and individuals across nine Asia-Pacific regions.

“It’s a huge honour for Melbourne Water to be recognised with these Asia-Pacific Spatial Excellence Awards,” Mr Wandmaker said.

Mr Kelly was acknowledged for leading the technical development of a spatial solution that supported Victoria’s involvement in the Australia-wide ColoSSos Project, responsible for tracking and monitoring the presence of the virus that causes COVID-19 in the sewerage system.

In particular, he developed an app that enabled authorities to effectively manage sewer sampling efforts statewide.

Melbourne Water’s Innovation and Commercialisation award win for its Confined Space Entry simulator was recognised for being a groundbreaking safety training tool.

The simulator puts great emphasis on the planning and preparation steps that are required to complete a safe entry into a confined space.

It’s the second time in three years that Melbourne Water has been successful in winning the Innovation and Commercialisation category. 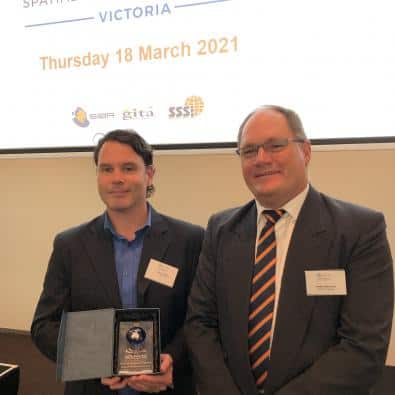 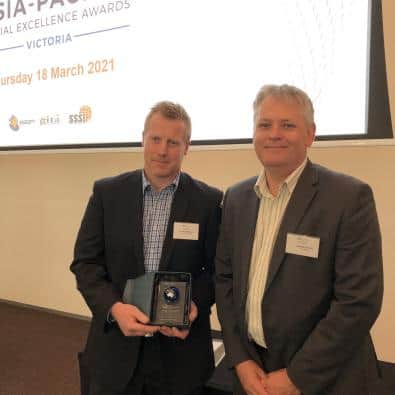 Heath McMahon and Graeme Kernich of FrontierSI with the Spatial Enablement Award.