When Queensland Urban Utilities proactively made the decision to upgrade the sewerage network in Brisbane’s south eastern suburbs to meet the future demands of the growing city, it faced a choice. 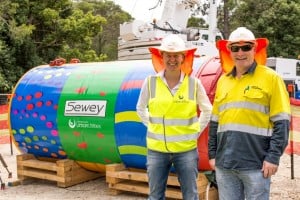 Project Manager (right), Will Campbell, inspects Sewey prior to commencement of the works.

It could replace and increase the capacity of the existing trunk mains, which follow Bulimba Creek, one of the many creeks which crawl through the city’s undulating suburbs off the Brisbane River.

Alternatively, tunnelling a more direct route through the hilly terrain could significantly reduce the overall footprint and cost of the project. This approach would be challenging, but also had the potential to significantly reduce construction impacts on the community.

Following this latter path has proven not to be a case of ‘tunnel vision’ for Queensland Urban Utilities.

By harnessing modern microtunnelling techniques, and avoiding the meandering, flood-prone creek line, the project team has reduced the length of trunk mains required for the upgrade by up to 2km. This shaved an estimated $15 million off the project’s total cost, and reduced the likelihood of future sewage bypasses into the creek system.

“We take a lot into consideration when designing upgrades for our sewer network.

“We look at the integrity of the existing network and plan for future demand while also considering what impact upgrades will have on our customers.

“The feasibility study we conducted back in 2011 identified several potential alignment options to meet the project’s goals, including following the existing infrastructure along the creek line.

“The most direct and cost-effective alignment was under an existing major suburban road (Scrub Road), however that would also require tunnelling through Belmont Hills Bushland Reserve.

“Given the depth of the proposed gravity sewer was, at times, more than 50m deep, only modern trenchless methods proved feasible.”

Significantly, use of the Herrenknecht AVN1500TB tunnel borer enabled greater drive lengths in excess of 850m.

“By harnessing the latest technology, the project team has been able to drive lengths of over 850m, including sections with curved alignments to locate the tunnel shafts in locations which minimised the impact on customers and traffic users.”

Similar microtunnelling techniques were successfully used by Queensland Urban Utilities for a recently completed service tunnel that runs 560m beneath the Brisbane River from Kenmore to Jindalee in the city’s western suburbs.

“We have also been able to increase the capacity of the new pipes installed as part of the Bulimba Creek Sewer Upgrade, which, at 1,680mm in sections, are the second largest pipes in Brisbane’s sewer network,” Mr Campbell said.

“We also believe some of the now-completed sections are the longest pipe-jacks using GRP pipe materials anywhere in Australia.”

Keeping community impact to a minimum

The reduction in the number of shafts led to the second significant benefit of the Bulimba Creek Sewer Upgrade project: minimising the overall disruption to the community.

“By utilising modern trenchless techniques, we were able to minimise the number of drive shafts which also reduced the number of residents directly affected by the construction works,” Mr Campbell said.

“Several of the shafts were designed to allow the tunnel borer to launch in both directions, which reduced the number of sites where long-term construction works were undertaken to only three sites.

“Reverting to more open-cut techniques would have required us to dig up more suburban streets affecting all customers along the alignment.

“We were able to mitigate the impacts to mainly residential customers near the drive shafts by erecting noise-limiting panels which enclosed vital equipment enabling the drilling to continue below-ground 24/6 basis reducing the overall project construction time.

“The behind-the-scenes tours which were offered to residents were particularly useful in helping people understand exactly what was happening below and around them and the sheer size of the infrastructure works being delivered. We also involved the local rugby league club in the project by facilitating a competition to name and design the tunnel borer.

“When you’re dealing with upgrades of this scale to vital infrastructure, you can never completely eliminate adverse impacts on the community.

“However, by following a ‘no surprises’ approach to community engagement, and by harnessing trenchless techniques, we’ve kept community impacts to a minimum compared to projects of similar scope and significance.”

The 4.25km section of gravity-fed pipeline installed as part of the Bulimba Creek Sewer Upgrade runs between Wecker Road, Mansfield and Cadogan Street, Carindale. The trunk mains and maintenance points have been installed and are currently undergoing capacity testing. The new pipes are expected to be fully operational in the second half of 2019.