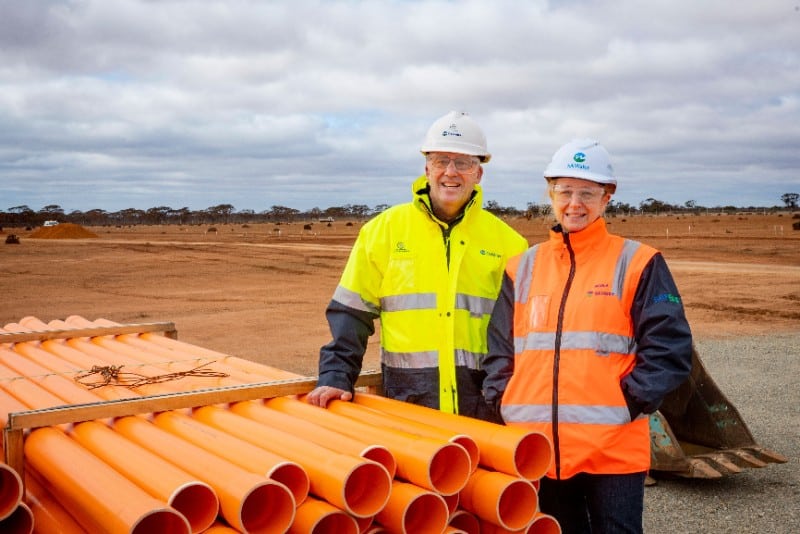 The Morgan to Whyalla Pipeline in South Australia is set to receive more than 19,000 solar panels as SA Water continues on its path to achieving a zero-cost energy future.

Civil works are underway to install 7.5MW of solar photovoltaic (PV) cells on the pipeline’s third pump station at Geranium Plains near Robertstown, which is one of four along the 350km pipeline that transports treated, high-quality drinking water to customers between the River Murray and Upper Spencer gulf.

SA Water’s Acting Chief Executive, Mark Gobbie, said the panels – located adjacent to the pump station – will be installed on a racking system, allowing them to pivot from east to west and capture as much sunlight as possible.

“The DC voltage captured by the panels is converted into high-voltage AC energy, where it travels underground to a connection point for use at the pump station,” Mr Gobbie said.

“Delivering water from our Morgan Water Treatment Plant through to customers in the Barossa, Mid-North and Spencer Gulf requires a significant amount of power, so the energy generated at this site will help reduce its overall draw from the energy grid without compromising on performance.

“This is the first of four solar arrays to be installed at pumping stations along the pipeline, with a further 15,000 solar panels also soon to be catching the sun’s rays at the fourth pump station at Robertstown.”

SA Water has engaged South Australian-based company Enerven on a $304 million framework contract to deliver solar and battery storage infrastructure at a number of SA Water sites across the state.

One of the largest electricity users in the state, SA Water’s 2018-19 water and wastewater pumping and treatment operations required around 520GW hours of power, totalling in excess of $80 million.

“Increasing our renewable energy generation will help sustainably reduce operating expenses in our network and allows us to pass on the savings we achieve to our customers,” Mr Gobbie said.

“There will be times when we need to draw electricity from the grid, but this project allows us to store and sell energy at other times while protecting our business from the volatility of the electricity spot market.”