The Northern Territory Government has confirmed the proponent and chosen route for the North East Gas Interconnector (NEGI) pipeline.

After a competitive process Jemena has been was awarded the contract to construct the pipeline connecting the northern and eastern gas markets.

The 622 kilometres pipeline will cost $800 million to construct and the chosen route will run between Tennant Creek in the Northern Territory and Mount Isa in Queensland.

The announcement comes after the Northern Territory Government launched a competitive process seeking private sector proposals for the development, with four proponents reaching the final stage.

The chosen route was one of two options, with the other proposal running from Alice Springs, Northern Territory to Moomba, South Australia.

Jemena and APA Group both proposed the northern route from Tennant Creek NT to Mt Isa, while

DUET and China National Petroleum Corporation were in favour of the southern route.

The chosen route will be much cheaper and quicker to construct and it doesn’t rely on government funding. It will also link better to Australia’s gas export market.

The proposed southern route would have been more expensive to construct and may have needed government funding. However, this route would have provided more long term benefits for the east coast domestic gas market.

The pipeline is a significant project for Australia as it connects the ample gas reserves in the Northern Territory to east coast markets which face a supply shortfall in the near future. The project is also expected to stimulate exploration and production of shale gas resources in the Territory, as well as promote infrastructure and economic development in Australia.

Northern Territory Chief Minister, Adam Giles, said the project would not require any underwriting from taxpayers.

“This nation-building project will generate investment in regional infrastructure and deliver real jobs with no financial commitment from taxpayers. This is a great outcome and shows Governments can deliver major infrastructure projects through a robust competitive process,” Mr Giles said.

“Without this pipeline, the populated parts of Australia would have huge difficulty securing their energy needs.”

It is estimated the Territory has more than 200 trillion cubic feet of gas – potentially enough to power Australia for more than 200 years. 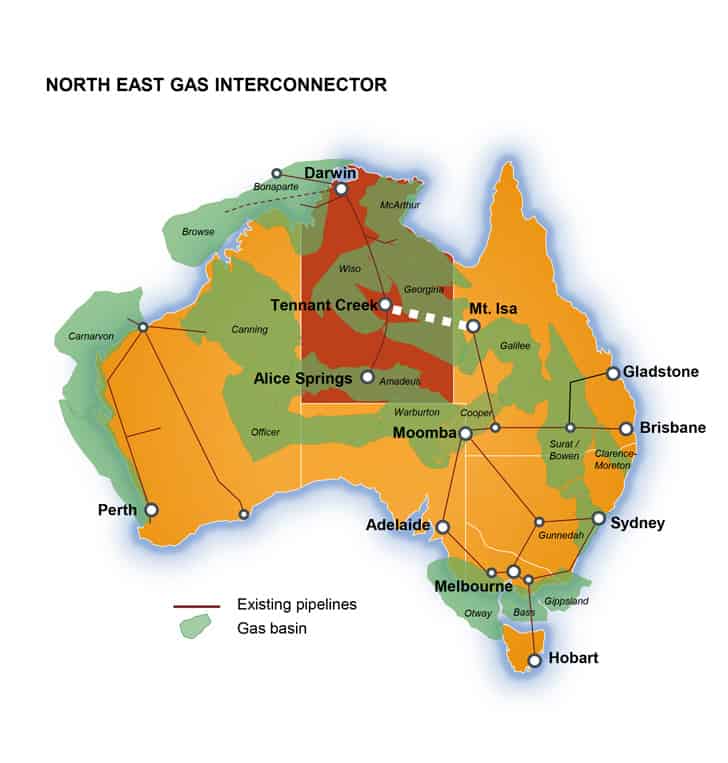 Mr Giles said the reason the northern route proposal from Jemena was chosen was because it offered cheaper tariffs, cheaper gas processing costs and the option to increase the capacity of the pipeline prior to the laying of the first pipe if market conditions support increased capacity.

“Building the NEGI will drive commercial exploration and development of currently untapped gas reserves, unlocking the next phase of economic growth for the Territory and helping build a stronger Northern Australia,” Mr Adams said.

“The pipeline is cost-effective and relatively quick to build, so it will support a strong gas industry for the Territory by getting gas to market at a competitive price, accelerating development of NT gas fields and helping create jobs and opportunities in the gas industry.

“As further reserves in the NT are proved up, we can expand our scalable pipeline to meet strong demand from east coast customers.”

Mr Adams said he believed routing the pipeline to Mt Isa was the most efficient way to get gas to the east coast, as it reduced potential construction risks and required lower volumes of gas to be contracted to be viable.

“As soon as sufficient gas is proven in the Northern Territory, Jemena will seek to build a further link connecting Mt Isa to the Wallumbilla hub in Queensland. This will vastly improve the reliability of the gas transmission network by reducing sole reliance on Moomba as the hub for supplies. It will also introduce some much-needed competition into the east coast market, while accelerating the growth of the NT gas sector.

“By linking the Territory’s vast resources into the east coast network, NEGI will be the foundation of a more robust, competitive Australian gas market,” Mr Adams said.

To ensure remote communities benefit as much as possible from the NEGI project in the long-term, Jemena is also investing in training programs, Indigenous apprenticeships and a new Indigenous social enterprise in Tennant Creek to provide support services for construction and road maintenance projects in the area.

The NT Government’s Power and Water Corporation (PWC) will supply gas to the NEGI from its contracted suppliers. The quantity of gas PWC is entitled to under its contracts far exceeds the amount needed to meet the NT’s energy needs.

PWC will use a gas sales agreement with Incitec Pivot to lock in a guaranteed gas supply for approximately 10 years from the completion of the NEGI to 2028.

“It will underpin existing regional jobs and create opportunities for many future investments,” Mr Brasher said.

Construction of the NEGI pipeline will create more than 900 jobs during construction, 600 of which will be for locals and offer up to 100 contracts for local businesses worth about $112million. There will be ongoing maintenance and operations teams based in Tennant Creek and Mt Isa.

Jemena expects construction of its 14 inch pipeline to be completed by 2018.